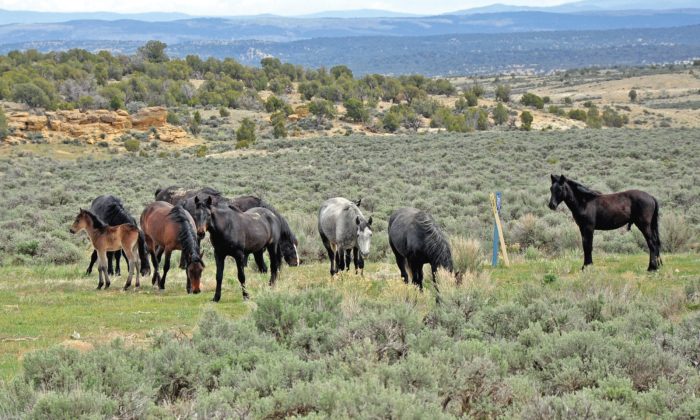 Piceance Mustangs is not just the name of a wild horse herd in northwest Colorado. It’s also the name of a new outfit that’s helping the Bureau of Land Management (BLM) do a better job taking care of that herd. The group, comprised of volunteers from all over the state, got its non-profit status in March and held its first workday on the range in early May.

Group President Tracy Scott is co-owner of Steadfast Steeds Mustang Sanctuary in Glade Park, CO. She and her husband work with mustangs that are warehoused in BLM holding facilities to make them adoptable.

“When I learned [in 2011] that we had 30,000 horses in holding facilities without freedom, family, or familiar way of life, my husband and I started Steadfast Steeds to address the horses in the holding facility.”

Horses in holding is probably the most controversial part of the BLM’s Wild Horse and Burro Program. It’s certainly the most expensive. In 2016, close to $43 million of a $66 million dollar budget went to short and long-term holding. Last year, BLM spent a little over $46 million out of $80 million, feeding and housing 45,000 mustangs and burros in government corrals and on pastures in the Midwest.

“Their lives have no purpose and they need a place to go,” said Scott. “So we started a program that helps find horses new purpose and new life.”

It seemed like a natural fit for Steadfast Steeds and Scott to become a part of Piceance Mustangs. In Colorado, the BLM maintains mustangs on four HMAs. Three of them — Sandwash in northwestern Colorado, Little Bookcliffs near Grand Junction, and Spring Creek in the southwestern part of the state — have volunteer groups that help the BLM with range improvements, mustang identification, and administering fertility control. They’re also on hand for round-ups, when mustangs are taken off the range.

Until March, the Piceance horses, which roam over 190,000 acres between Meeker and Rangely, were groupless.

“So, we met last year, same weekend, and everybody had lots of ideas and we started down the road of creating a group,” said Scott.

On the first workday last week, the group fixed fence. But, said Scott, they’ve already received a large grant from a private foundation that will go to improving existing water wells on the HMA. She said the project will help spread the horses, cattle, and wildlife out on the range. “The water holes are the big place where everybody congregates and that’s where we’re seeing lots of range damage.”

Rangely rancher and former Rio Blanco County Commissioner Jon Hill is glad to hear that the group is looking at water and range improvements. He’s also in favor of monitoring the herd and identifying the horses.

The BLM has also contracted with a local rangelands expert to determine how much forage is used by cattle and how much by the mustangs.

Tracy Scott believes that volunteer groups on all of Colorado’s HMAs Herd have lent credence to the program. But that doesn’t mean she’s a fan of BLM’s current management practices. Ideally, she says, sustainable, on-the-range management is key.

“The first thing that comes up for me is birth control,” she explained. “To help slow the population growth — not by gathering.”

There is some speculation that rounding up  mustangs puts them into survival mode, she said.

“The horses make more babies because we’re pulling so many out.” She adds that she’s not blaming anyone. “It’s just, what are we doing here?”

After a successful workday out on the range, it looks like Piceance Mustangs and the BLM’s White River Field Office are closer to finding an answer to that question. More information is at piceancemustangs.org.