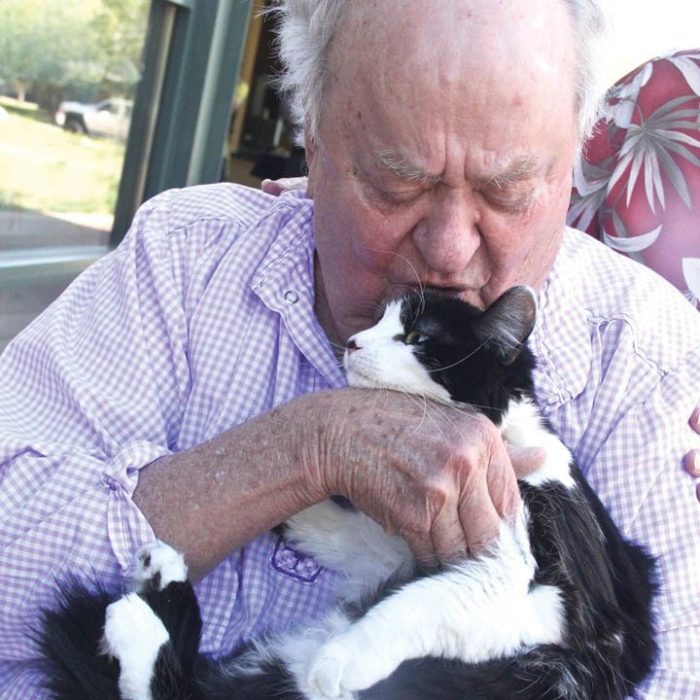 Editor’s note: This story from May is being widely reshared following Calaway’s passing on Dec. 12, 2018. We have very little information at this time, but plan a full feature and/or obituary. A celebration of life will be held in January.

When he talks about Carbondale, Jim Calaway lights up — and not just when discussing the myriad organizations now thriving in no small part because of his contributions.

“Have you ever had a burger from Fat Belly?” he asked me, leaning forward in his well-worn leather chair like a giddy kid sharing a secret.

I informed him I was a vegetarian.

“Well, shit,” he replied, genuinely dismayed that I’ll never be able to share in the joy he gets out of the Main Street staple. “The Fat Belly hamburger is so delicious, and I’ll tell you why: they flavor the hamburger with pickle sauce or something. It’s the most delicious damn thing.”

He feels similarly affectionate for the Village Smithy, White House Pizza and his lunchtime mainstay, the Pour House.

“I go out to lunch every day,” he said with a grin. “Some years, I’ve actually gone out every day of the year.”

I’d asked him about his self-care routine. Surely, there must be something keeping the 87-year-old energized to stay so involved in the community.

It turns out, that was the secret: the community. He quit cigarettes and Scotch half a century ago, and other than that and his physical therapy regimen following a knee replacement, Calaway’s vitality is seemingly the direct result of his relationship with the town he calls home.

“The other thing I do nearly every day is have a guest come see me to talk about whatever they want to talk about or just visit or listen to music. I love music,” he said.

While locals and visitors alike will recognize his name on plaques (such as the most recent addition to Thunder River Theatre Company), buildings and even streets in the area, Calaway has a soft spot for his neighborhood nickname. “People call me the Porch Man. I like that,” he mused about his evening visits at his River Valley Ranch home, usually over a glass of white wine.

Not a silent donor

When not socializing, Calaway is catching up with the leadership at his favorite nonprofit entities in the lower Valley.

“There are seven nonprofits in this Valley that I have been substantially involved in,” he said. “They’re all seven successful; none have failed. And I like that very much.”

He’s a self-proclaimed lifelong liberal Democrat — Calaway even spoke at the National Democratic Convention in 1988 — and while he’s a trustee emeritus for the Aspen Institute and contributes to national causes like the American Civil Liberties Union, most of his philanthropy is focused at the local level, which is completely apolitical, he emphasized.

“These local things that I support have nothing to do with politics,” he said. “I want to support things here.”

For Calaway, it’s about the people (and, in the case of Colorado Animal Rescue, the animals) — and not just the people running those organizations, but the people impacted by them, as well. He counts himself among the latter.

“I’m happy that these seven big things and some smaller things have helped the lower Valley, but they also help Jim be a happy person,” he said. “Because I have figured out that giving is the No. 1 way to be happy. Whatever you can: give and love for justice and peace.”

Calaway learned long ago that living “the high life,” complete with a private plane and sailboat, didn’t bring him fulfillment — but that doesn’t mean he’s hung up his business cap. He and his twin sons, now 60, are principals in an Argentinian lithium producer that garnered a $265 million investment from Toyota.

“We’re one of the leading producers in the world,” he said. “We have about 250 employees there, and whatever I make out of [it] is going to my charities. I’ve realized that the more I give, the better off Jim is in my heart.”

And the better off the community is, as evidenced by his continued recognition. This month, Calaway will follow in the footsteps of Ruth “Ditty” Perry, Mary Lilly and Dorothea Farris in receiving the Mt. Sopris Historical Society’s Hattie Thompson Award, given annually to “a person in the community who exemplifies Hattie’s pioneering spirit, who is bold, industrious and daring, who possesses a true love of the land and joy of learning, and whose significant contributions have enriched our community.”

From the seven nonprofits with which Calaway is most involved:

Colorado Animal Rescue (C.A.R.E.)
“Jim’s generosity and commitment are the foundation of Colorado Animal Rescue’s success, guiding our dedication to this community and the animals we serve. But it is through his friendship, laughter and love that we are inspired to live our very best lives.”
– Wes Boyd, Executive Director

Colorado Mountain College
“Hundreds of students have benefited from Calaway Scholarships and have gone on to contribute in so many ways to our communities. Jim also conceived and founded CMC’s Board of Overseers. CMC will always be better as a result of the Calaway legacy.”
– Dr. Carrie Besnette Hauser, President and CEO

Calaway Young Cancer Center, Valley View Hospital
“With Jim’s help and drive, we raised the money to provide incredible cancer care in a Valley where it didn’t exist before. The expertise that we have here is so invaluable to the whole Roaring Fork Valley. I adore the Calaways; we’re lucky to have them.”
– Ann Wilcox, Executive Director

ReStore 2.0
“Jim Calaway is a gem in our Valley, and Habitat for Humanity is honored to have Jim and Connie’s support and enthusiasm for our organization.”
– Scott Gilbert, President

Carbondale Branch Library
“When the new branch was built, he helped ensure that the branch reflected Carbondale’s eclectic and artistic spirit. When the library faced deep budget cuts, his generosity helped to reduce the impact felt by our community.”
– Jeannine Stickle, Former Librarian