The handkerchief and the cross 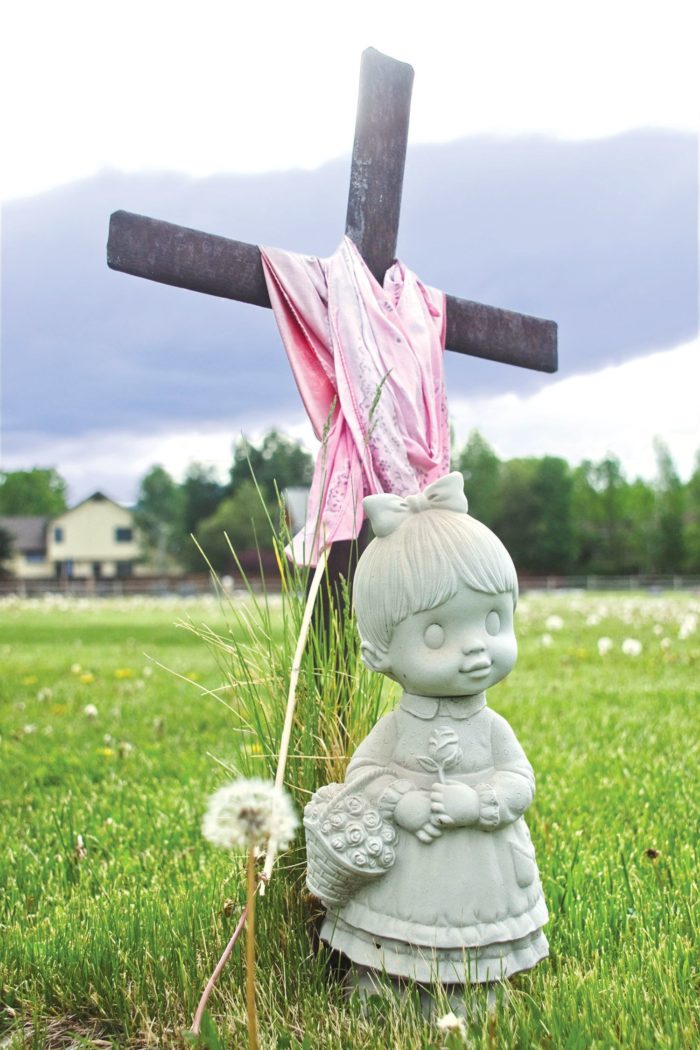 Editor’s note: In lieu of Pages of the Past this week, we’ve opted to reprint an abridged version of a story from the Dec. 23, 1974 Roaring Fork Review (available for public perusal in its entirety at the Carbondale Branch Library). The predecessor to The Valley Journal and thus The Sun, the Review was the first paper in Carbondale in decades and was thus a chance to put some previously oral history into print. Here, Pat Noel takes poetic license with an old story related by Joe Corthell about an iron cross in Weaver/Evergreen Cemetery, which at the time of writing was disused and overgrown, but is now run by the Town. A work of fiction in its details, it was written for Christmas. We choose to run it for Memorial Day, which, though first and foremost a time for honoring those who fell in service to our country, is also an opportunity to check in with all those no longer with us.

The snow came late that year.

After the long summer and lingering fall, the winter stage was somberly set, although the hanging gray clouds had not yet given up their leavy loads. But it was coming, to be sure.

Up the Crystal from where they had recently migrated, the snow drifted high through the lodgepole pines and no sound could be heard above the brute silence and swirling wind.

Down in the valley, though, all was bare. The land seemed embarrassed. Denuded by the autumn, it was stripped of cover and seemed to cry for the protective mantle of the snow that hung just overhead.

The people knew snow was coming, too. Smoke wafted from the chimneys of town and families huddled around the glowing stoves.

Outside the town and down by the river, closer to where the deer were, was a small gypsy camp.

The gypsies seldom came to Carbondale. “Thieves and no-accounts,” said the townspeople. “Freemen and traders,” replied the gypsies, but their visits were few and far between.

Still, this year anyway, there was a gypsy family down by the river.

Everyone knew it, but since it was just three of them, the strangers weren’t bothered. “They’ll be gone soon anyway,” the people said, “and besides, it’s Christmas.”

Rom, Lawara and the infant girl liked the camp.

It was near the river and that was good. They believed in the river because it flowed and to them flow meant life.

“What divides us is evil,” Rom would tell Lawara as they ate their evening meal in the covered wagon. “What joins, relates and flows is good.”

And so they believed and took what comfort they could from their camp by the river and ignored the fences and divisions within the town up the road.

But things were not well. The girl was sick and the “gaje” in town were not to be trusted. Gypsies trust only gypsies. Their own tribe only could they depend on, and they were separated by time and long distance.

They had stayed behind when the others left so Lawara could recover from the ordeal of birth. The child had come down with the fever. Now, Rom realized, they had stayed too long. The girl was very sick and, although he faithfully brewed the proper herbs, he knew they would not be enough to stem the tide of her fever.

Rom was reluctant to go or stay. The wagon had to leave soon or they would be forced to spend the winter isolated in this somewhat hostile land. The girl, however, was failing and not strong enough to travel.

Rom brewed his herbs and hoped, but the child grew weaker in the gypsy wagon. Crying softly that night, she died in the morning.

Back in town, the people knew nothing of the gypsies’ sadness. The women were busy with baking and holiday preparations while many of the men walked the streets or visited the general store. Lounging around the pot-bellied stove, they talked of politics, crops and weather, none of which were good.

A man named Long owned the store then; and whether the crops were good or not, he extended the farm and townspeople credit in the winter. He was a good person and his store was a gathering place for the area. Goods were not only sold but much news, gossip and information was exchanged.

On this particular day, the Long store had another visitor. Mustachioed and brightly dressed, the gypsy Rom opened the door and strode into the room halting the dangling conversations. While no one had ever bothered the gypsies, the people still regarded them as odd, and Rom’s appearance in the store prompted silence as the men looked him over.

It wasn’t all that unusual for him to be in this place, however. He had come to Long’s early in the morning from time to time to barter for goods — sweeping, loading, stacking or some such in exchange for staples and milk.

Long liked the stranger and did not begrudge him his odd ways and, if truth were known, delighting in the stories of the gypsy’s old home in Yugoslavia.

Today, however, Rom was not at Long’s store to tell stories or trade for goods. He had come for help to bury his daughter.

Carrying two iron rods, he walked over to the blacksmith and asked if he could make a cross from the pieces. The smithy said he could and walked from the store to his shop to do the job. Digging into his purse, he then extracted three silver dollars and approached Long.

“My daughter is dead,” he quietly told the old man, “but I do not grieve. We Kalderash believe in the life after death. A second life that is found and is a fruitful one and corrects all of the mistakes of the first.”

With that, he gave Long the three silver coins and asked the merchant to see to it that his daughter’s grave was kept and that, each year, a red scarf was place on the cross.

Long took the money and promised to do as the gypsy asked.

After the blacksmith had returned, Rom took the crude cross and returned to the river camp. As evening approached, the father and mother placed the small body in the grave and wept silently.

That night, they broke camp and left the valley behind.

Long, faithful to his word, came and placed the red kerchief on the marker. Staring silently at the freshly dug earth, he felt a cold drop on his neck.

As the snow began to cover the waiting fields, he heard the church bells chime in town. It was Christmas Eve, and he would soon have to meet his wife for the service.

He looked down at the scarf once more and left. If he hurried, he could just make it.