Looking back on 35 years as a kindergarten teacher 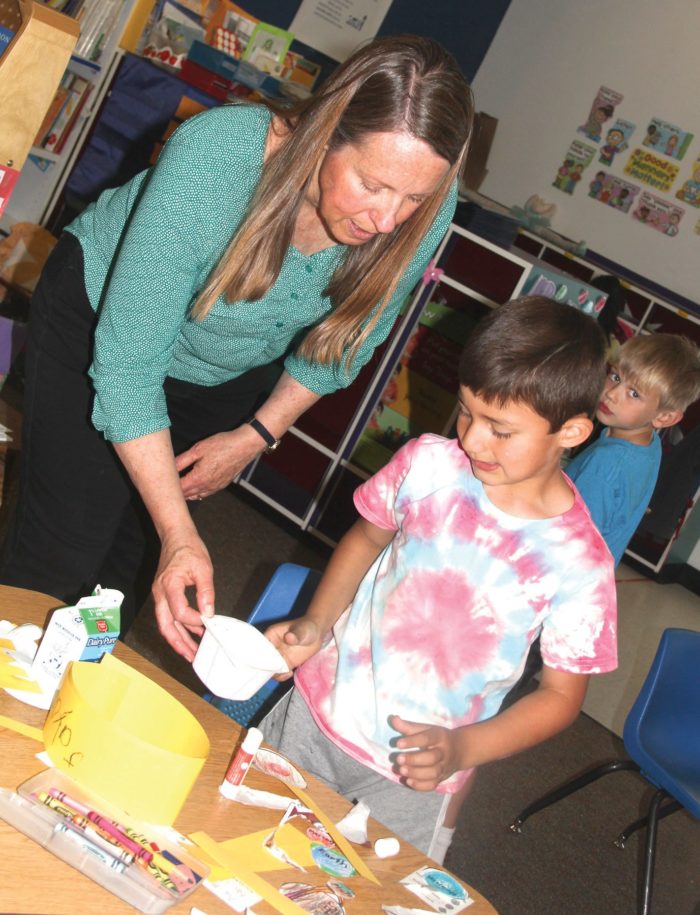 It was the promise of being able to spend more time with her grandson that finally convinced Sydney McBrayer it was time to retire from her Crystal River Elementary School classroom.

“That’s kind of the thing that made me say, ‘OK, it’s time to retire.’ I want to spend time with grandkids — because there will be more,” she said with a smile.

McBrayer followed in her family’s footsteps and began her career with the Roaring Fork Schools District in 1983.

“My dad was a teacher and a principal in the district; my mother-in-law taught in Glenwood; my brother and his wife taught in Glenwood,” she said. “[RFSD has] kind of put our food on the table for a lot of years for me.”

For a few years in her career, her daughter Elley joined her at CRES.

“[It] was pretty amazing to get to work with her professionally and see her grow as a teacher. She taught first, so she had kids that I’d had in kindergarten — they’d go from Mrs. McBrayer to Ms. McB. It was just golden,” she said, beaming.

Ellie now teaches in Dublin, where she lives with her husband. But the distance doesn’t mean McBrayer doesn’t get to see her daughter.

“She’ll be home for a month to go to a couple of weddings, and then we go to Scotland and Ireland for three weeks,” she said of her summer plans.

In the future, though, McBrayer won’t be limited to summers for her treks across the pond. As a teacher, summertime was the only option for vacations — when airfare rates are often at their their peak.

“You try to go in the summer, and it’s like double what it is the rest of the year. This will free me up to travel when rates are a little bit lower,” she said.

As for her two sons, they’re more local. One is a business owner in Glenwood Springs and the other lives in Montrose with his wife and their seven-month-old son.

“I’m just excited; I’ve got lots of stuff to do and can’t wait to do it,” McBrayer said of her upcoming retirement.

That doesn’t mean she won’t miss the classroom and the tiny folk who’ve populated it over the decades.

“I’m going to miss seeing the kids grow up,” she said. “I think that’s the fun part about kindergarten: you get to know them now when they’re kind of the way they are. They don’t have any preconceived notion of how they should be; they just are.”

Over the years, McBrayer watched the expectations of her field change a bit. Early in her career, the kindergarten curriculum focused primarily on social development. Now, that social need is still prevalent, but teachers also need to layer in a more rigorous academic component, too, she explained.

“It used to be that kindergarten was pretty much getting along with one another and social relationships, and then a lot of the academics that used to be first grade are now in kindergarten,” she said, adding that it can be a bit of a balancing act making sure that students’ core developmental needs are met while also learning arithmetic and language (including Spanish) fundamentals.

“Their personality is definitely blooming — that’s what’s really fun. They’re trying to figure out friends. Just developmentally, that’s where they are: it’s all about the social part,” she said. “Then you’ve got to make sure the the academic piece happens, too. They turn into readers in kindergarten, which is pretty exciting. When kids come in, a lot of them know no letters, no sounds. And now this time of year, they’ll pull out a book and they can read a really simple little vowel book to you and can feel pretty proud.”

McBrayer spent her career constantly ready to switch gears, always attentive and able to keep up with her five- and six-year-old students. It’s an energy that will serve her well in retirement, too. After all, she has family to visit, a dog to adopt and a plethora of home projects to tend.

“I need to be out in the garden. I’ve got furniture to refinish and sewing to do. [There’s] tons to do,” she said.