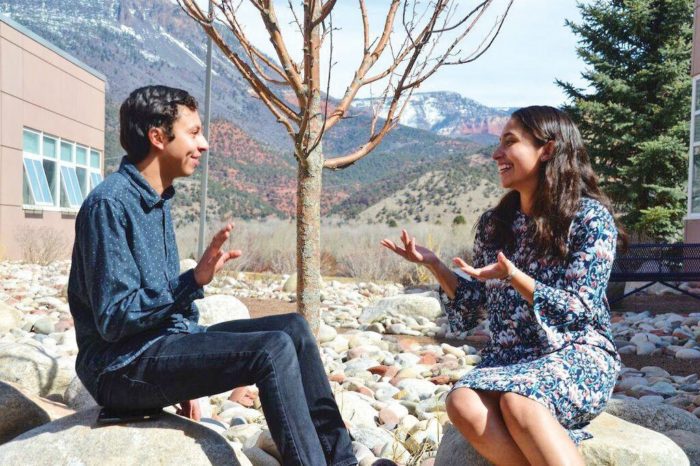 Like most of his peers, Mauricio Sosa will be graduating from Basalt High School on Saturday, June 2.

Just hours after rehearsing for graduation, Sosa will join elected officials, school administrative staff and many mentors and friends at 4 p.m. June 1 at the official ribbon cutting celebration for his peace garden. (Attendees are invited to bring “peace art,” such as painted rocks; RSVP at tinyurl.com/peacegardenrsvp.)

The 2,920-square-foot garden along the front wall of the high school facing the Rio Grande Trail is still a work in progress, four years after Sosa conceived it.

“I wanted to have a ribbon cutting before I graduated. It’s kind of bittersweet to say goodbye to it and having other students take on the project and incorporating what they want to see,” Sosa said, adding that in that regard, he hopes the project is never fully finished. “I’m excited to see what future generations do with the garden and what message they want to get across and what it means to them.”

For Sosa, the garden is about having a space to reflect and rejuvenate. His own tenure in the school system included being bullied; the garden is the kind of place he always wished he’d had available to him.

“Every time I was bullied, I wanted a place where I could get away from school and just be by myself, so that’s the purpose behind the garden. My freshman year, I thought, ‘There’s other people going through things similar to me.’ So I wanted to create that space,” he said.

He identified the unused land parcel on the school property that will now serve as the garden and approached the school’s administration about his idea. They approved — but he still needed to find a way to fund it.

“My freshman year, I wrote the first grant application through the Five Point Dream Project,” Sosa said. Additionally, he launched a Go Fund Me campaign. “We had a few businesses donate their time or services and goods for the project,” he added. All in all, he raised more than $44,000 for the first phase of the project, which was mostly focused on structural foundations.

Sosa knew he couldn’t stop there.

“Phase 2 was the maintenance,” he said, which involved raising an additional $28,000 for shade structures, pathway remodels and additional plants to add more color to the garden’s aesthetic. Even now, before its official opening, Sosa is focused on the garden’s future — most importantly, he’d like to see it as a repeatable model for other schools to replicate.

“[We’re] making an informational program that we plan on sharing statewide and nationwide in order for other schools to build their own peace gardens in their own communities, as well as creating a video for new generations to show them the meaning behind the project and what it stands for,” he said.

The soon-to-be-graduate is keenly aware of the logistics needed to disseminate that information. “We actually have started a Facebook page… So far, we have had a few people who have liked the page from California to Washington, D.C. to Florida to different parts of Colorado. We plan on doing a press release with different newspapers throughout the state and the bigger names like the New York Times. We’ll see how much we can spread it,” he said.

Of course, while Sosa has done most of the legwork to make his garden a reality, he didn’t do it alone. He credited the high school’s librarian, Kate Bradley, and his “community expert,” Robin Waters, as being his mentors through the process. He also enjoyed municipal support from the Town of Basalt, Pitkin County and Eagle County, something for which he is very proud.

“It’s exciting to see all three governments come together and support a project,” he said.

As for what’s next, Sosa will attend Metropolitan State University in Denver in the fall to study entrepreneurship — a natural fit, considering he’s already created a lasting legacy in his hometown.