‘Busy is the new normal’ as commercial occupancy increases 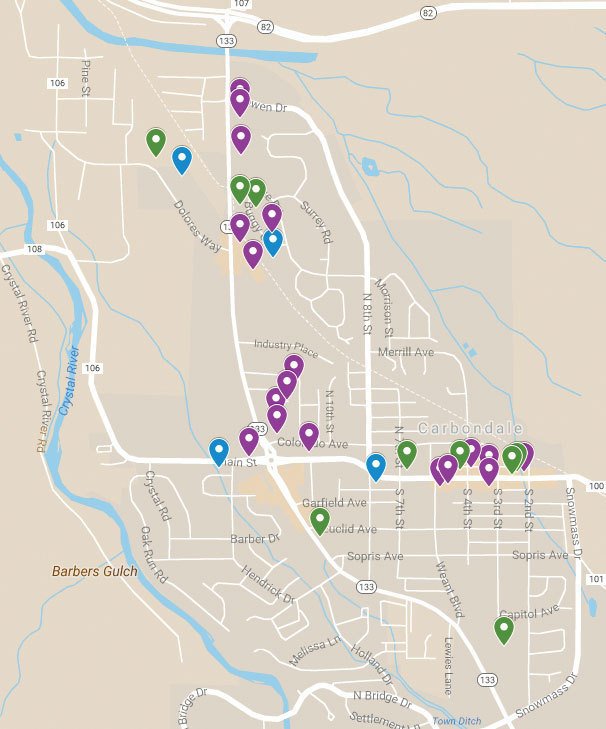 There are roughly 339 operating businesses within Carbondale (plus several in transition) and space for 33 more, according to The Sun’s second annual unofficial commercial inventory. That’s up from 306 and 39 respectively when our inaugural effort established a baseline this time last year.

The municipality doesn’t issue business licenses and the Chamber of Commerce tracks only its members, so it can be difficult to ascertain whether local business is thriving or declining, much less calculate a commercial occupancy rate. As such, we were obliged to check each office building and industrial complex ourselves in order to offer a direct, quantifiable (though likely not comprehensive) assessment over time.

We counted adjacent units together, didn’t distinguish between rental and tenant-owned spaces and left out government buildings altogether. As such, it’s likely that the apparent increase in overall inventory in a year when several units were actually removed is a result of shuffling and more efficient use of smaller spaces.

Based on what we can tell from peering in windows, consulting directories and pestering other tenants, the town’s overall occupancy rate is solidly above 91 percent.

That squares with an uptick in sales tax and what Town Manager Jay Harrington has seen on the ground.

“There is a vitality level right now that goes back to 2007 or ‘08,” he said. “Pretty much every piece of vacant property has someone taking a look at it.”

He cited new tenants for pretty much all the vacant restaurant spaces — see the adjacent story — plus pending developments like City Market, First Bank and the Stein Project as signs of the boom.

“There’s a lot of cool, new stuff,” she said. “Busy is the new normal. It makes me worry about people getting burnt out, but it beats the alternative.”

She particularly highlighted the 200 block of Main Street, which last year’s inventory found full of vacant space now occupied by an apothecary, a tattoo parlor and more. In general, she expressed a sense that the cultural and economic center of the community is expanding.

A Main Street address remains the most common in our inventory — representing roughly one third of the total — but downtown also gets a boost from Fourth Street, Merrill and the Third Street Center (which is effectively vacancy free). The Highway 133 corridor, meanwhile, has as much vibrancy hidden down side streets as on the main drag. Thriving pockets of business include the manufacturing district off Dolores Way, the cannabis, car care and creativity hub that is Buggy Circle, and unassuming districts like Industry Place and ET Plaza. 1101 Village Rd. alone could rival a block of downtown — though upstairs offices are a surprising percentage of the inventory there, too.

One of the perks of all that variety is the opportunity for myriad small operations — emboldened, perhaps, by the example set by the Creative District — to try out something new. Altai Chuluun is right in the middle of that entrepreneurial spirit with the GlenX coworking space, which is already looking to expand after less than a year in the Third Street Center. If the funding can be arranged, he’d like to see a space with small retail booths and private offices instead of just shared desks.

“The economic vitality and resources are going to big markets while small communities across the country are being left behind,” he observed. “We need to collaborate and gather forces to think different and offer solutions for people to innovate and create.”

He thinks Carbondale is a natural hub for that kind of innovation.

“It’s right in the middle of this Valley that’s a great representation of America as a whole,” he said. “The talent is there. It’s just connecting the dots.”

Mayor Dan Richardson, meanwhile, denied possessing a crystal ball to see the future of economic development — particularly with respect to projects not yet built — but opted for optimsm.

“I think the future looks very bright,” he said.