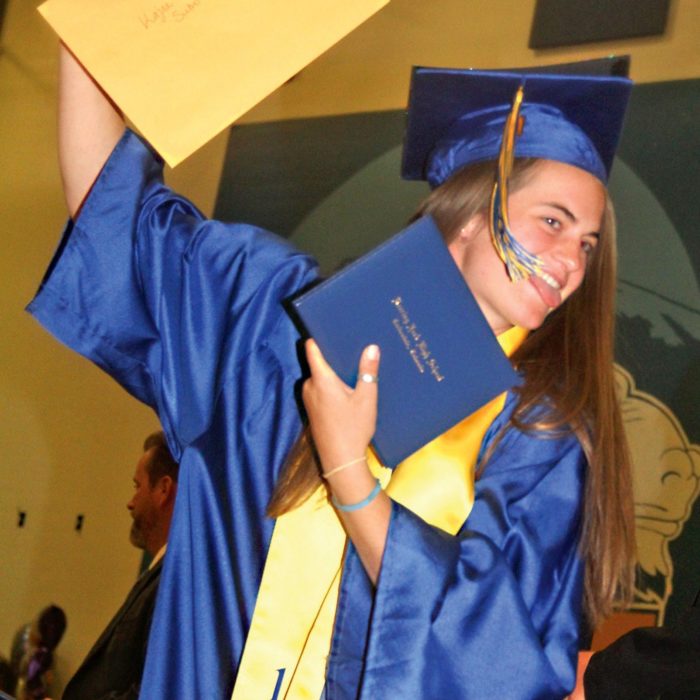 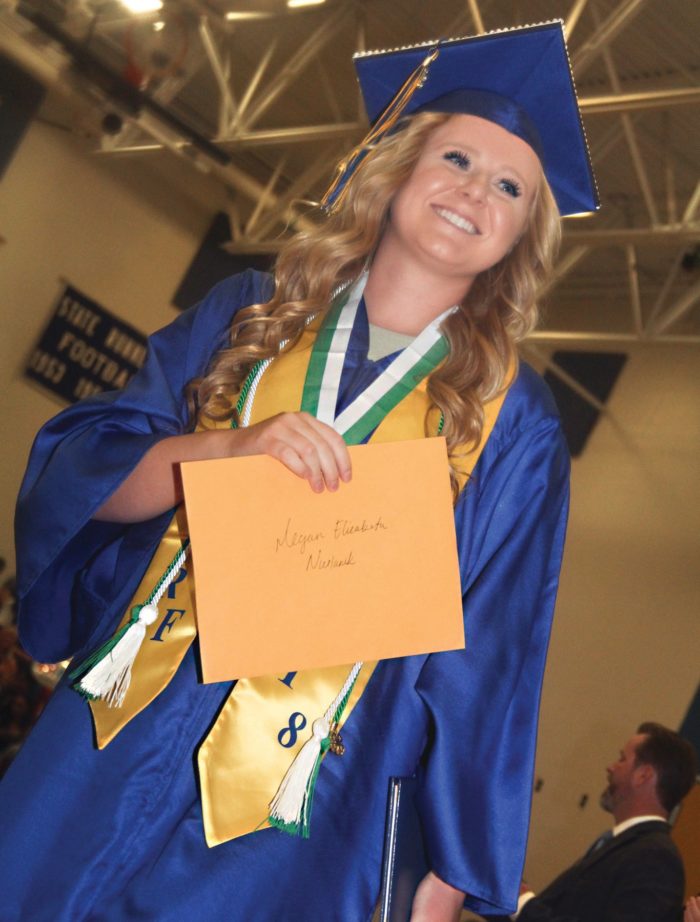 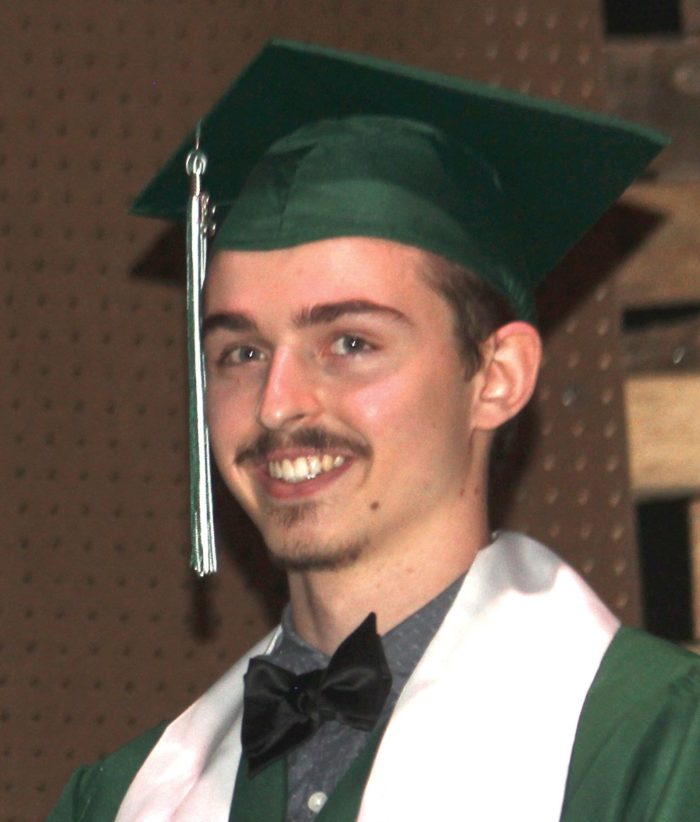 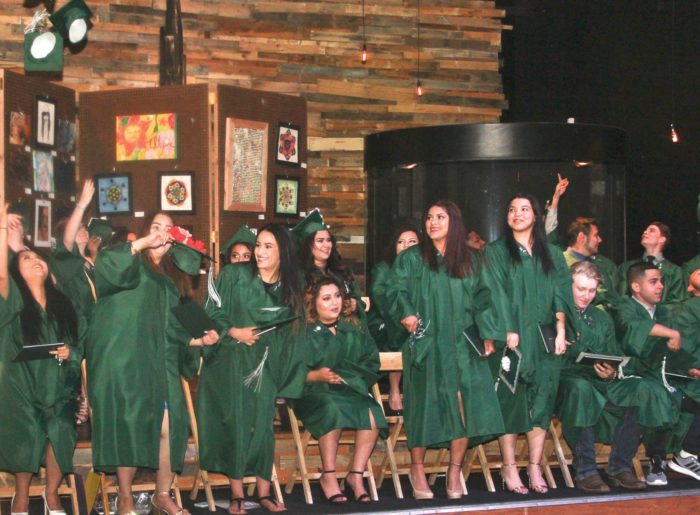 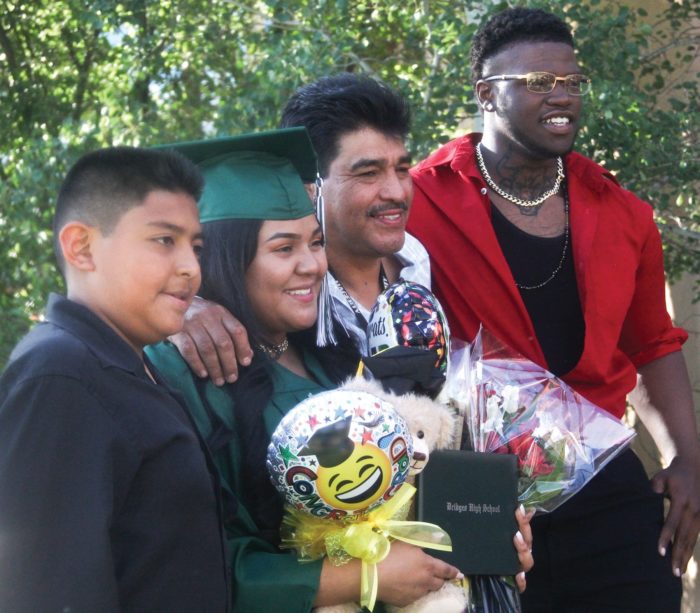 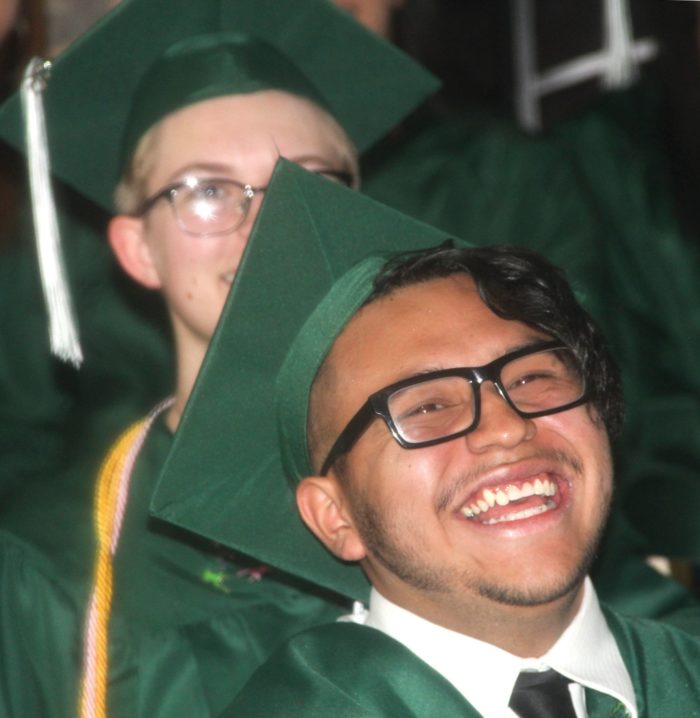 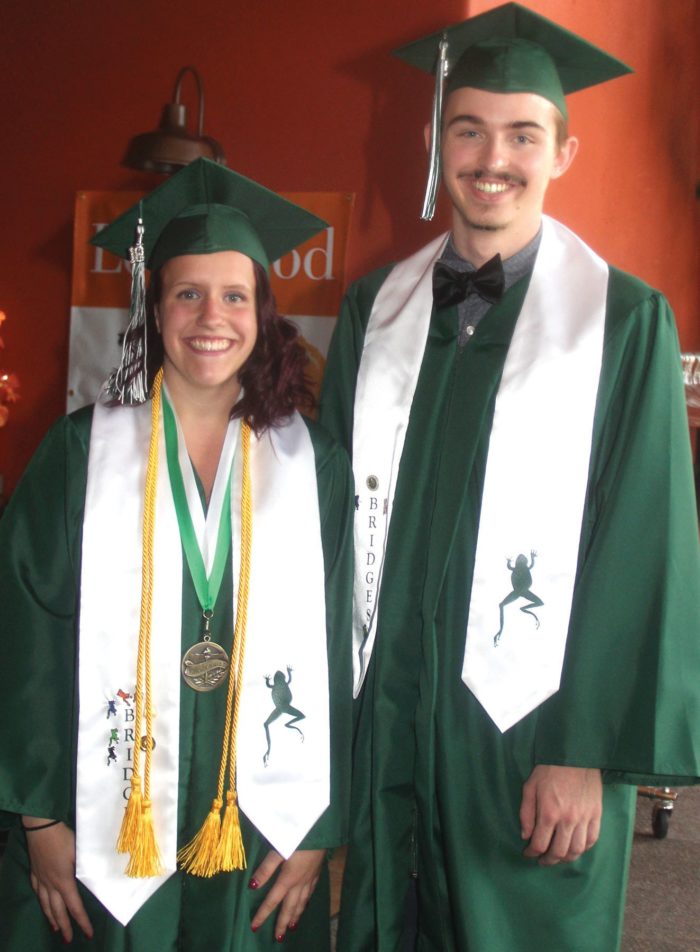 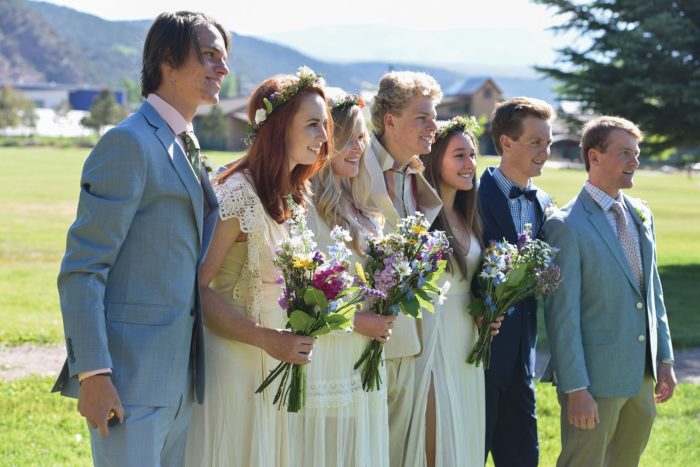 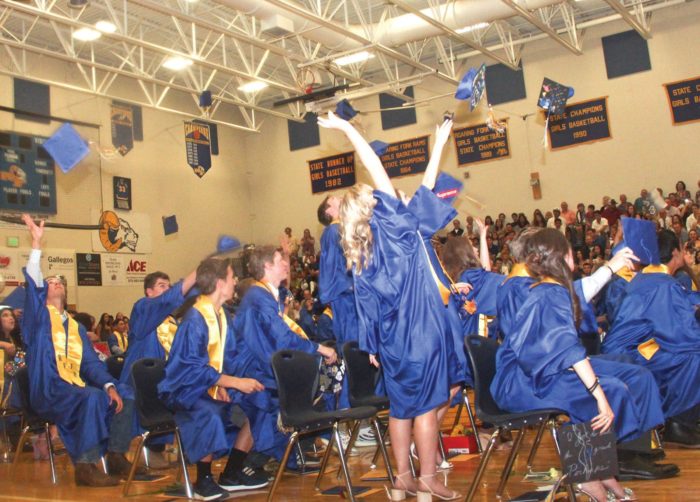 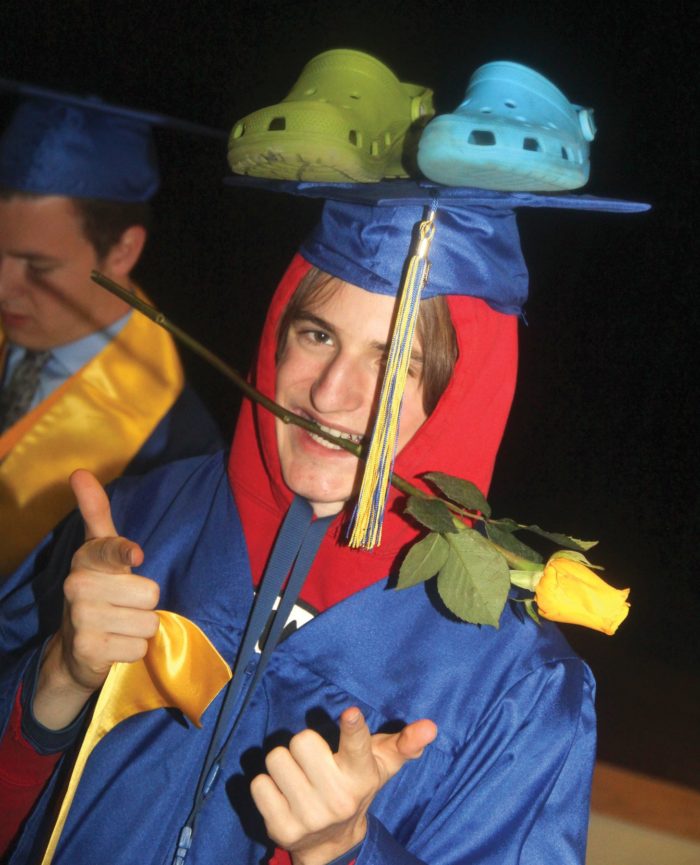 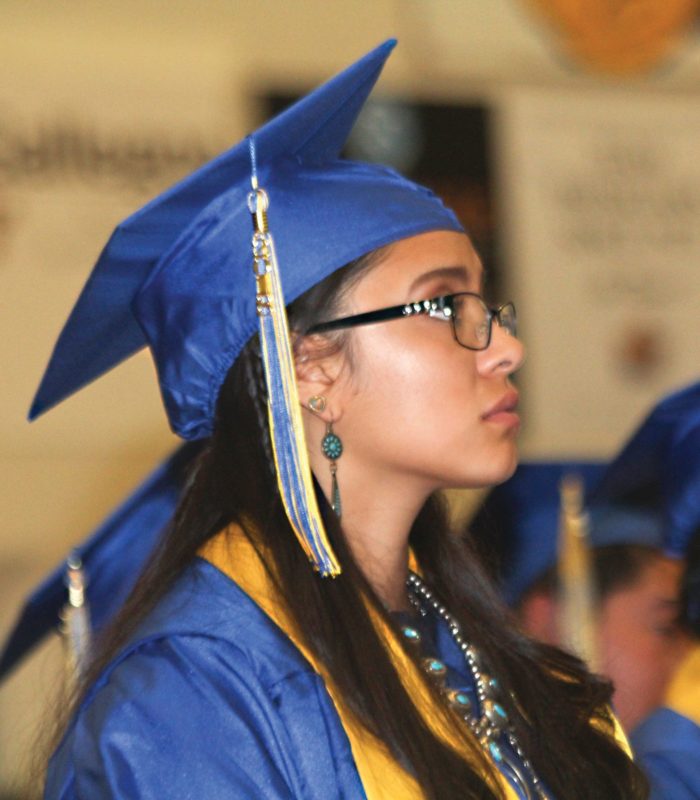 While each commemoration reflected the diversity in secondary education options for a town boasting fewer than 6,500 residents, some common themes emerged in the advice that respective faculty speakers imparted on their graduating classes.

“You’ll be happier in general if you make intentional decisions rather than simply reacting to what’s happening around you,” Katy Curry, an art teacher and Bridges alum, said during her commencement speech on June 1.

She also warned students to learn from some of her mistakes. “I ran up a credit card, and I thought that if I just didn’t answer the phone when they called that it would go away,” she said, laughing at herself.

Bridges High School is a registered Alternative Education Campus with the Colorado Department of Education that incorporates strong support systems in addition to academics into its curriculum. While receiving their diplomas, many students cited gratitude to mentors and friends who “wouldn’t let [them] drop out of school” and “didn’t give up even when [they] wanted to quit.”

The sense of achievement was palpable at The Orchard that Friday evening — the room erupted in applause when Principal Lyn Bair proudly announced that the 33 Bridges graduates had amassed $233,000 in collective scholarships. As each student went down the line of hugs to reach Bair, who turned tassels on graduation caps, teachers read a list of their accomplishments and future plans.

Many of those plans included continued studies at Colorado Mountain College and taking gap years to work. Most of the graduating class worked in addition to their studies at Bridges, and everyone had completed more than 20 hours of community service.

“We finally got to the point where we get to get our awesome, fancy sheet of paper that we have worked so hard for these past few years, whether or not we started at Bridges,” Valedictorian Kaysha Clark said in her speech to her classmates. “Bask in the knowledge that you have finally finished high school. Life is all about hard work and being pushed; it’s time to show the world that we can handle that.” Clark, who completed her required coursework and capstone project early, has been working fulltime and plans to enroll in a nursing program.

The following morning, in a picturesque setting in front of The Barn, students sat in their best pastel suits and summer dresses in the shade of a stand-alone tree. To their right, a podium took center stage, and an intimate performance space was set off to the other side, where graduating seniors would perform soulful acoustic renditions of songs like “Cherry Wine.”

It was a more formal affair than Bridges’ graduation, but the sentiment was familiar: family, friends and faculty all feeding off each other’s enthusiasm and pride for the reason for the day.

During her speech, environmental studies teacher Robin Colt advised the 47 students to “live deliberately” — echoing similar themes as Curry’s. “Be the architect of your life… Go Jackson Pollock on the walls — or tear down the wall and bask in the sunlight,” she said.

Colt also cautioned against accruing more debt than savings — albeit in humorous fashion. “Squirrels do not accrue credit card debt. And if they don’t save enough acorns, they die,” she said to unanimous laughter from the crowd. “You have a big advantage over squirrels: a 79-year life expectancy coupled with the power of compound interest.”

CRMS is an independent entity that carries a $36,800 price tag for unboarded students (41 percent of students receive financial aid), and some of that tuition covers the experiential learning opportunities that have contributed to the school’s reputation. Those trips became amusing conduits for lessons learned in both Sam Weiser’s and David Winter’s speeches.

“It was a morning like any other at the Costa Rica Animal Shelter…” Weiser began one anecdote about his senior project paying $35 a day “for the privilege of shovelling monkey poop and being a pecking toy for parrots.” A true breakfast enthusiast, Weiser was dismayed to realize the typically prepared breakfast was not going to happen that morning.

“I learned that I had a choice to not let a bad breakfast define me for the rest of my day,” he said.

Hadley Hentschel, a 14-year-veteran science teacher at RFHS, must share Weiser’s emphasis on the importance of the day’s first meal: after all, he came armed with snacks that he tossed out to graduates during his commencement speech — just in case they hadn’t had breakfast.

And much like Curry and Colt, Hentschel invited students to pave their futures intentionally. “I challenge each and every one of you to take charge of your life’s script. Be the owners of where your life is headed,” he said.

In addition to being overwhelmingly the largest ceremony with a 71-graduate class in an auditorium, RFHS students made the day all their own with their bespoke graduation-cap styles. Knoll Featherstone, whose signature accessory is his Crocs, strapped a pair to his cap. Several students wrote messages thanking their loved ones in Spanish. Some wore traditional American Indian headdresses to recognize their heritages.

In a light-hearted acknowledgment, Class Vice President Kajsa Sutro both thanked and apologized to staff for her fellow “sinking seniors,” a nickname the group earned for general unruliness in the classroom.

“I thought it might be appropriate to deliver a formal apology on behalf of the ‘sinking seniors,’” she said, inspiring knowing smiles.

All was clearly forgiven, as evidenced by Hentschel’s speech. He credited the 2018 class with being an intrinsic part of the Carbondale community and, much like a tree with expansive limbs, no matter where the future takes them, RFHS grads will always be connected to their roots.

The seniors weren’t the only ones wished well in their next adventures: Vice Principal Kelsie Goodman and Band Director Mark Gray are also moving on from their tenures at RFHS.