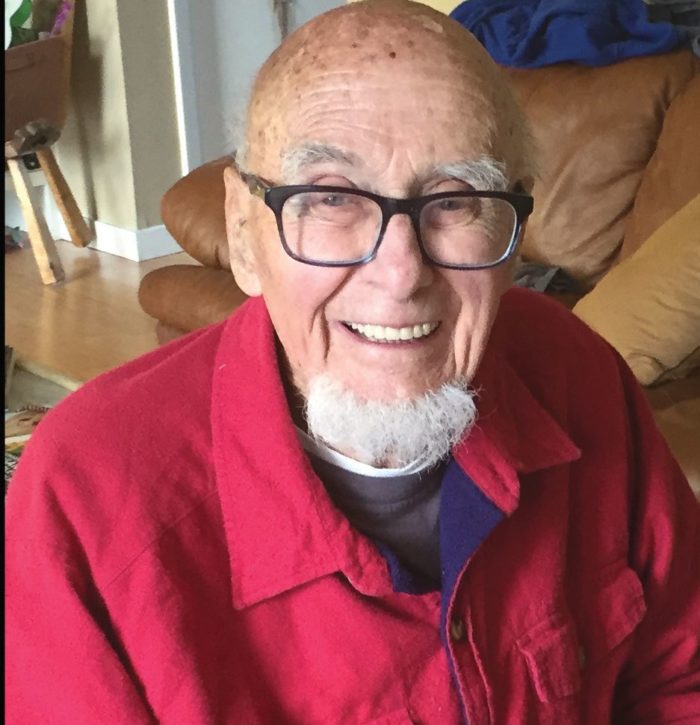 John Lawyer, former municipal judge of Carbondale, passed away peacefully at home with his family after 99.5 terrific years on Earth. Born in Macomb, Illinois, John soon moved with his parents John C. Lawyer and Bess Dague Lawyer and his sister, Ruth to Evanston, IL where John grew up enjoying swimming in Lake Michigan.

Swimming became his favorite  sport that he practiced at the Glenwood Hot Springs Pool once he moved to Carbondale until two months before he died; the pool gave him a lifetime pass last year to honor his almost half century there. John’s other lifelong passion, astronomy, began when John was 12; he went on to study it and taught astronomy and cosmology at CMC for many years using his own home observatory up the Crystal River where many students came to share the  night sky wonders.

John graduated from Pomona College, then studied law at the University of Chicago. He served in World War II in naval intelligence where he had the good fortune to be posted to Brazil where one task was tracking down the Nazis sending signals to submarines with American supply ship routes. The Navy found the Nazi radio operators in a seaside church tower in Santos so the American ships were safe, and John met his wife, Arlette Ondine, at a carnival party in the same town, success on all fronts. John returned to the US with his bride and went to officer training school  at Harvard and then served on the USS Cook out of New Orleans. After the war John and Arlette returned to Rio de Janeiro, Brazil where he practiced international law until after their first daughter, Illène (Suzy) was born. They returned to the US in 1949 where he practiced law with his father and uncle in Indiana.

John and Arlette discovered Aspen in 1952 thanks to a National Geographic article and took their first ski vacation, then returned for a family summer vacation the next summer. John and Arlette took a break from their marriage for three years while Arlette and Illène settled in Aspen, then in 1955 John came to Denver to work for Shell Oil, remarried Arlette, added another daughter, Ruth Margaret to the family and enjoyed Colorado for the rest of his life. John and Arlette Ondine moved to Carbondale in 1970, and John opened his law practice in Glenwood Springs. John made friends easily wherever he lived and had a gift for keeping friends for life.

John’s descendents are grateful that he shared with them his love of skiing, swimming, fishing, the stars, and flying single engine and glider planes and made Colorado the center of a richly rewarding life for all the family. The Lawyers organized multiple tours to Brazil in the 1980s and ‘90s that many Roaring Fork Valley residents enjoyed. Together they made respect for other cultures, languages and religions a mainstay of family life.

John is predeceased by his beloved wife, Arlette Ondine, his parents and his sister, and great granddaughter, Tsukiko Kodama. He is survived by his daughters, Illène Pevec of Carbondale, Ruth Margaret Lawyer and husband Don Sunderland of New York and; grandchildren Jennifer, husband Paul Clark and son Milo Clark, Larisa, Gabrielle, and Jamie Sunderland and Ayana Pevec Brown and husband Seth Brown, Lucien Pevec and wife Gabriella, Olivia Pevec, Zuleika Pevec and husband David Kodama and Hamilton Pevec and wife Devika Gurung and his great grandchildren: Ruthie, Isabella and AnaSophia Brown, Milo Clark, Aisha and Wynne Pevec, Hosa Kodama, and Isa Pevec, We all appreciate his positive and grateful attitude towards life and miss his joyful smile;  we know his spirit is at peace. We thank the Veterans Administration and Home Care and Hospice for the Valley for their wonderful support and care for John.

A memorial service will be held later this year and announced in the paper.