To see de Beque’s legacy, look around you 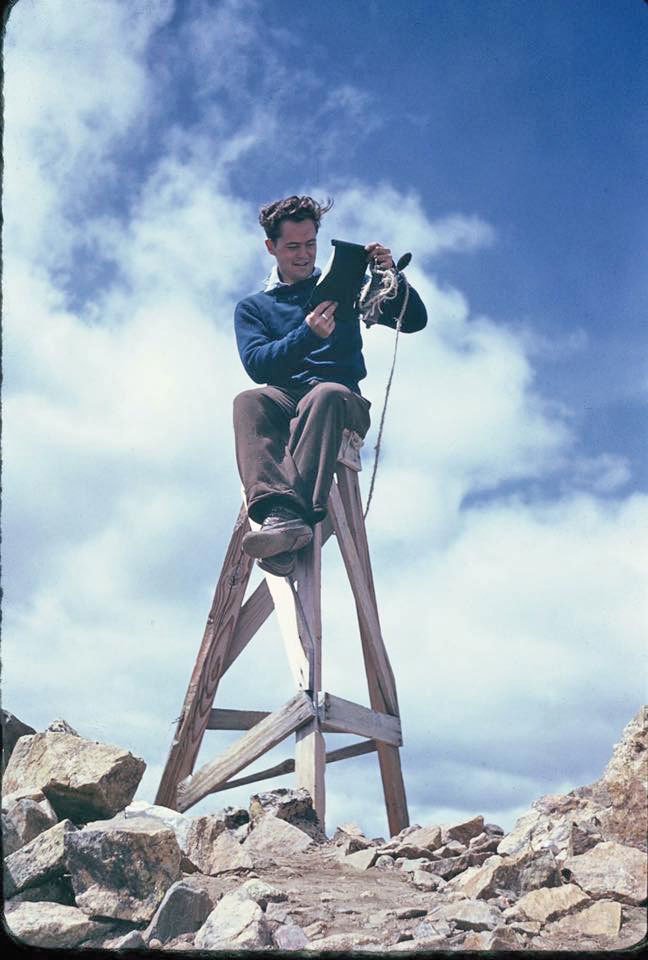 Wally de Beque was a man of few words and many contributions.

“He sort of instilled in us this idea that community is important and that your participation is what makes it happen,” noted his daughter, Shelle de Beque.

Added her half brother, J. Bob Davis, “Almost every day of the week he had a meeting.”

During his 96 years in Carbondale, he had stints on the Fire Board (he signed the purchase order on the town’s first fire truck), Town Council and Chamber of Commerce; was a longtime member of Rotary, the Lions and the Masons, and was instrumental in founding the first medical clinic, bank and municipal sewer system. He did a lot to lift up others who have since become fixtures, as well.

“His stock answer was that for a long time nothing changed here,” Shelle noted. “In a way, he enabled new Carbondale when the artists and hippies started to arrive.”

Take Mountain Fair founder Laurie Loeb, who bought property from him when she moved down from Aspen.

“If it hadn’t been for him I probably wouldn’t still be here,” she said. “He helped out a lot of people. He was a very kind and generous person.”

Or Bob and Kathy Ezra, who asked him to cosign a loan so they could renovate the abandoned Crystal Theatre. “I guess that would be okay,” he told them — and then proceeded to wait more than two years before even beginning to charge them a “ludicrously low” rent.

“It’s no stretch to say that without Wally there would be no Crystal Theatre,” Kathy noted. “He was a dream of a landlord and we always valued his friendship, humor and historical contributions to the town.”

Wally came by his community spirit honestly. The third of his name, he traced a line of prestige back to Wallace de Beque I, who founded the town of De Beque where it reportedly became too difficult to ford the river and continue west. Wallace de Beque Jr. married Margaret Dinkel, daughter of Sally Dunlap and William Dinkel — an even more prestigious name in these parts.

William Dinkel came to Aspen from Virginia to try his hand in silver mining and discovered he could make a more reliable income selling rations — first from the saddle bags of one mule and eventually through a stage stop and store in the Carbondale area.

“The Meeker Massacre had just happened so they were kind of deterred from going further,” Shelle noted. “And it was a big open valley with water. It just seemed like a place to settle.”

Dinkel helped make the spot into a town with his various enterprises, from a bank to a sawmill to the lake that irrigates the Big Four. Legend has it he brought electricity up from Glenwood just to convince Dunlap it was a town worth moving to. The massive granite capstone to his grave on White Hill bears a Latin inscription Wally’s son-in-law Hank van Berlo translates as “if you require a legacy, look around you.”

One of his most enduring legacies, though, was Wally — who managed to make plenty of trouble in his early years despite his family connections. His youthful antics reportedly included starting a fire at the Dinkel Building with a homemade match gun and throwing snowballs into the Pentecostal church.

He also remembered when the marble for the Tomb of the Unknowns came through town and all the kids got to climb on it. The family also spent time at a cabin up the Frying Pan, which helped instill a lifelong love of the outdoors.

Things changed, however, in Wally’s teens when his dad died of heart failure.

“He felt like he had a lot of responsibility, particularly for his sister,” Shelle noted.

He graduated from Carbondale Union High School in 1939 and went to the University of Colorado to study electrical engineering. During his time there, he installed some of the infrastructure for what would be Camp Hale near Leadville. World War II saw him as an officer in the Navy, doing sonar and radar research for MIT and then at a submarine base on Midway.

Meanwhile, his former sweetheart Betty Clagett Davis (a member of another prominent local family) had married, had children and divorced. Upon his return, he married her and took her kids as his own.

Meanwhile, he ran Carbondale Power & Light with his mother and then on his own for years before selling it to Public Service and continuing to work for the company. If the power was out, the home phone would start ringing day or night and they’d have to assure folks that Wally was on the job.

Although he and Betty would get competitive over the crossword or Trivial Pursuit and he was an avid reader (particularly of the New Yorker), his chief pursuits were outdoors. If his maps are any guide, he hiked just about every draw in the Valley, and made his last trip to Thomas Lakes at the age of 86.

“He was kind of the sherpa of Mount Sopris because he took everyone up there,” said his daughter, Sally Smith.

He was also an avid skier from the early days of the sport and an avid fly fisherman.

“If it was less than two pounds, he didn’t really think you were catching,” J. Bob said.

His love of golf took him to Scotland to play at St. Andrews.

“He had this really soft, smooth swing that just lined it out,” Sally said. “Kind of like his personality.”

Indeed, almost every remarked on his quiet nature and assured the reporter that he wouldn’t have shared nearly as much as his kids did.

“If you didn’t ask a question, he didn’t have an answer — and then yes or no was about as much as you ever got,” noted J. Bob.

And while it was sometimes frustrating for Betty when he’d just walk out of the room in the middle of the argument, it didn’t seem to bother his children.

“He could just comfort you with the fewest of words,” Shelle recalled. “You felt his strength.”

His fierce independence led to some alarming moments, though, as he drove too fast, got lost and refused to ask for directions. But he allowed his kids their own freedom (and even enabled their romping by waxing the runners of their sled or letting them borrow his tools for projects) and spoiled his grandchildren, taking them on trips to Mexico and Disneyland. When Betty died in 2003, the family worried he might withdraw socially, but he continued to show up for POETS (Piss On Everything Tomorrow’s Saturday) get-togethers and make trips to winter in Arizona. One year, when his daughters proposed driving him down, he gave a non committal answer and left on his own the next day. He even had a smartphone and was on Facebook, though it was always up to others to reach out.

“He would never call you, but if you called him he’d go with you every time,” Sally said.

Wally only began to slow down four years ago, when he underwent mitral valve surgery.

“I never got to know him well until he got sick,” van Berlo noted. “We learned as much as he did about how to be an old person.”

His passing marks the end of an era.

“Of the people that lived in Carbondale during that time, dad was probably the last one,” Shelle said.

But his legacy lives on in his family and the many projects he started or enabled.

Memorial services
For Wally de Beque at 10:30 a.m. June 9 at the Carbondale Firehouse.