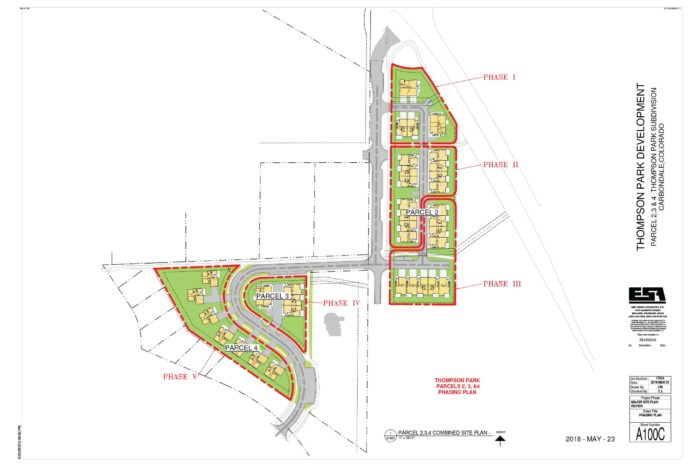 It should come as no surprise that a development proposal as protracted as Thompson Park wasn’t approved in one meeting.

In fact, Carbondale Trustees went into their June 12 meeting knowing that the major site plan review, conditional use permit and agreement amendments would likely be continued to June 26, if only to allow staff time to finish reviewing the engineering plans. But the council opted to get a head start by hearing from developers, taking public comment and discussing what they might want to look into before the next meeting.

The latest version of the development — approved unanimously by Planning and Zoning after three public hearings — calls for 33 townhomes and seven single family homes west of Triangle Park between Highway 133 and North Bridge Drive. The area was originally slated for 45 homes before part of the parcel was sold to Ross Montessori School. The last proposal approved by trustees called for 27 single family homes, but developers decided to go a different direction.

Neighbor Kevin Kreuz was concerned about the change. An architect himself, he raised a code-based objection.

“It does not meet the requirement that all new subdivided lots in this zone district be a minimum of 3000 square feet,” he said. “I strongly believe that this requirement is very clear and precise… it’s not subject to interpretation.”

“The code recognizes that townhome lots can be smaller than the 3000 square feet if done through the subdivision process,” she said.

Instead, in medium and high-density residential zones, the proper ratios can be calculated on a unit-wide basis — often factoring in private roads, sidewalks and driveways as open space.

Trustee Heather Henry, who was involved in the Unified Development Code process, explained:

“It’s about aggregating units, being able to do multifamily while still understanding the amount of space that we would want.”

Kreuz wasn’t the only neighbor to express concerns in public comment, but there were also several speakers in favor of the project.

“When we see new housing going up, that means that we’re part of a town that’s getting it’s head on straight,” Bob Johnson Hill told trustees. “There’s never going to be a consensus until we decided that our priority isn’t so much about square footage, it’s about building community in the square footage we’re given.”

The trustees — with the exception of Marty Silverstein — seemed largely unconcerned with the density. And Silverstein also acknowledged the need.

“This project has dragged on for so long, and there is such a shortage,” he said. “We all know anecdotally that there are people leaving this town and this valley every week because they just can’t afford anything.”

Instead, Ben Bohmfalk expressed reservations about traffic flow and parking. Richardson was more worried about pedestrian access — with no crosswalk for Highway 133 at the intersection with Lewies Lane — while Lani Kitching wanted to see the water engineering report given the recent drought. One collective concern was the distribution of Area Median Income levels for the affordable housing units and whether the developers would have to adhere to code standards.

All that and more will likely return at the next meeting, as, with the meeting running late, the trustees went ahead with the expected continuance.