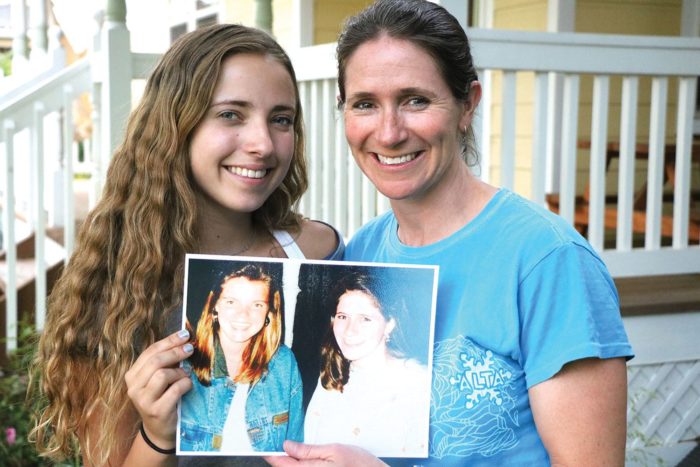 Next week, Grace Jardin is heading to Mallorca, a Spanish island known for its beach resorts and limestone mountains. But Jardin isn’t going for the sights; she’s going to visit her friend.

“I’m so excited because I’m so sad she’s leaving,” she said in the Hamiltons’ backyard. She had been helping Mercedes Gual, an exchange student who’d spent the academic year at Roaring Fork High School with her, pack her things before her trek home.

It wasn’t random chance that led Gual to stay with Jen and Matthew Hamilton in their River Valley Ranch home to study in the United States. It was family history.

“My grandpa did a student exchange, and so did my aunt and my mom,” Gual said. Her mother, Susana Munar Sandstrom, had lived with Jen during their high-school years to study in Denver.

“We really got along really, really well,” Hamilton said of that time. “We were just like sisters. It was a great year.”

The two kept in touch throughout the decades, even if it was just via Christmas cards some years. Then, a few summers ago, the Hamiltons planned a family vacation in Europe.

“So I got back in touch with her. I’d probably been there like three times since she was here, but it had been at least 10 years… since I had seen her,” Hamilton said.

Hamilton and Sandstrom reunited and met their respective families. “We had a great time,” Hamilton said, adding that Sandstrom mentioned during their stay that her daughter was considering spending a year abroad.

“I said, ‘If she wants to come stay with us, we’d love to have her,’” Hamilton recalled.

That idea worked well for Gual, too, who had some initial trepidation about leaving Spain. “I was really scared,” she said. “I didn’t really want to do it because I was like, ‘That’s 10 months of being away from home.’”

But her cousin urged her to pursue the opportunity during her sophomore year, before school became too rigorous. “He was going to do it, but he was a senior already and he was like, ‘It’s too late,’” she said. “So that pushed me to do it.”

Sandstrom recommended her daughter consider living with the Hamiltons to ease the transition, Gual explained.

Thanks to FLAG International, an exchange program that matches students from 51 countries with American host families, that process was a relatively seamless one, Hamilton added.

“The program allows a self placement, so she was able to select us,” she said. “We had to fill out all the paperwork and everything, but she was able to come and stay with us.”

Gual arrived in Carbondale Aug. 15. Because she played volleyball, she had an immediate outlet to make friends and identify as a Roaring Fork Ram — she already plans to visit next year to watch her Rams family graduate.

“I really like the high school here because it’s not a really big high school,” she said. That dynamic made her feel more comfortable than she anticipated — in fact, she said her favorite aspect about the whole experience was “just being away from home.”

Her experience wasn’t limited to Carbondale: the Hamiltons spent Thanksgiving in Vermont with Matthew’s family. “They have a tradition,” Gual said. “They buy all the flavors from Ben and Jerry’s ice cream, so there were like 15 ice cream cans. It was crazy.”

Additionally, she spent spring break road tripping with her host family to Los Angeles, with pit stops in Bryce Canyon and Las Vegas. “For spring break, I thought, ‘We need to take her somewhere she hasn’t been yet.’” Hamilton said.

And, of course, they made sure she experienced more local landmarks like Hanging Lake and Maroon Bells.

“It’s fun,” she said of touring Gual around. “You get to see the place that you live through new eyes. It’s so exciting for them; it makes it more exciting for you, too.”

Interested in being a host family through FLAG? Visit flag-intl.org to access the online application and email local coordinator Stacy Grimm (sgrimm@flag-intl.org).