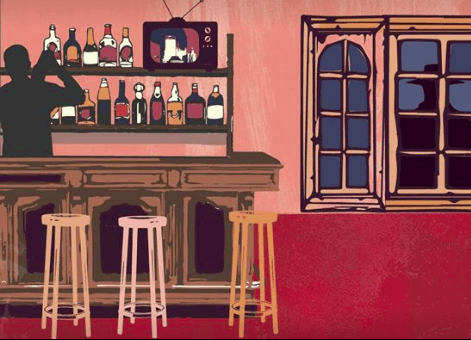 If one were going to finger the culprit most responsible for conspiring to create a compelling theatrical evening, Thunder River Theatre Company (TRTC) veteran Bob Moore would be the guilty party. As Ray, the resident conspiracy theorist at a down-at-the-heel New York bar, he’s the driving force behind TRTC’s latest play, Yankee Tavern.

That’s not an easy task when playwright Steven Dietz has given the character wads of words to discharge. Ray is the loosest of cannons, arguing with radio talk show hosts and shooting off sequential conspiracy theories that indict all the usual suspects, from the government to big oil to the media, from foreign terrorists to the Saudis and the Bushes. Motor-mouth know-it-alls like Ray are obnoxious, but Moore manages to make Ray funny and endearing.

Dietz’ play, an entertaining quasi-thriller, is set in a seedy knock-off “Cheers.” It’s a place where everybody knows your name, perhaps because there are so few customers. Grad student Adam, played by TRTC veteran Brendan Cochran, has inherited the bar from his father, who committed suicide – probably – on the day following the World Trade Center attacks. Ray, who was dad’s best friend, now lives as a squatter in the defunct hotel above the bar — that is, when he’s not helping himself behind the bar. Aside from a mysterious, silent stranger named Palmer, it seems Ray is the only customer.

The play’s theme – what to believe and who to trust – is introduced by Adam’s fiancé, Janet, who grills Adam about the many save-the-wedding-date cards that have been returned as undeliverable by the Post Office. She discovers that Adam added fake friends to the guest list. The ensuing squabble turns out to be an opening salvo in an unraveling of trust between the young lovers who may, or may not, have the same goals and who may, or may not, make it to the altar.

Janet would like Adam to sell the bar and get on with married life. Aside from completing his thesis, Adam’s goals are yet to be revealed to the audience, and perhaps also, to his fiancé.

Although Dietz left the characters of Adam and Janet a bit sketchy, Cochran and Brittany Dye, a relative newcomer to the TRTC stage, make their roles work. Christopher Wheatley, who plays the morose-looking Palmer, arrives early on, orders a beer for himself and another for a persistently absent buddy, then keeps his lips zipped for almost all of Act I. But in Act 2, Wheatley projects with power, delivering a gripping tale replete with nefarious details about finding — or planting — the ID of one of the 9/11 assassins. Palmer turns out to be a spook offering some spooky insights: we’re all prey to vicarious grieving after a tragedy. We’re all fodder for conspiracy theories once we stumble across things that don’t fit together in a world that’s too complex to fully understand.

Thunder River Theatre Company, under the able stage-direction of Dani Grace Kopf and the artistic direction of Corey Simpson, turns in a first-rate production. The staging and lighting are top-rate; the acting is strong. The only change this reviewer would suggest to would be in Act 2, where Janet delivers lines from the stage corner facing the theatre entrance. Because Dye doesn’t always project, the drama of her monologue — whatever it was about — is probably lost to many theater-goers located to her sides or behind her.

Just four characters must carry all the play’s action, and they do, building emotion and suspense along the way. Without spoiling the plot — which is intriguing, if far from seamless — suffice it say that the second act moves “Yankee Tavern” from the realm of comedy into international thriller territory.

The playwright recycles a stock of suspicious incidents in connection with 9/11: the spike in short-selling of United and American Airlines stock following the attacks; the notion that Building 7, the other New York City skyscraper to fall on September 11, was deliberately demolished to protect secrets held within, and a man who claimed to have notarized advance knowledge of the hijackings. The playwright’s point isn’t to credit or discredit these theories, but to indict our credulity and laziness in responding to them. Yankee Tavern successfully walks a thin line between encouraging us to reject outlandish conspiracy theories while also delving into our growing convictions that the government is dispensing less than the whole truth.

TRTC has been nominated for four 2018 Henry Awards for exceptional regional theatre, including one for Bob Moore’s character portrayal of the furniture salesman in “The Price.” Well earned. This reviewer would finger Moore in a New York minute for an award for his role as Ray.