Luckily, no one was there when the tree fell (but it made a loud noise in several lives) 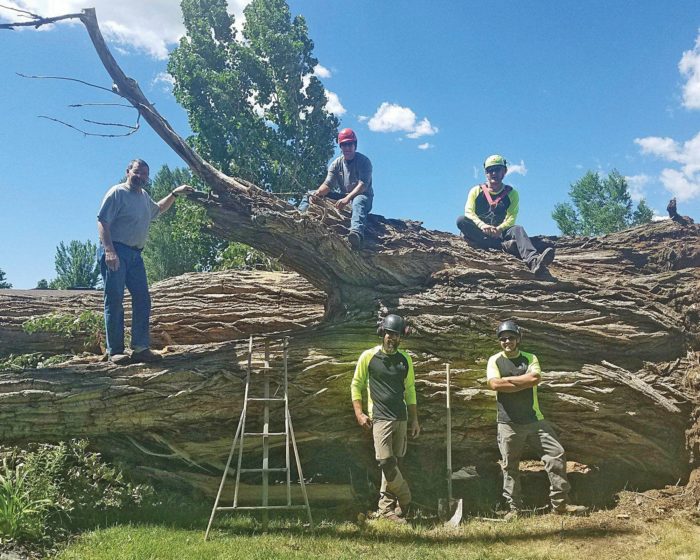 Doni Nicoll was all set for his and his family’s next chapter. They’re already renting a new home in Arizona, where his wife and daughter have relocated. Their Satank property had a buyer and was set to close Friday, June 15. It had been professionally cleaned and awaiting its final walk-through, scheduled for Thursday afternoon at 1:30.

“It was so pretty, we almost felt like not selling it,” Nicoll said with a chuckle.

Meanwhile, a little before 1:30, Sarah Murray — the realtor managing the sale — received a call a from those buyers. They were still finishing their lunch at Silo and running about 10 minutes late.

In hindsight, everyone involved is grateful for that delay. At almost exactly 1:30 p.m. that Thursday, what was purportedly Garfield County’s oldest cottonwood tree fell in the afternoon’s high winds — and crashed right through the roof above the kitchen island of the newly cleaned, ready-to-close house.

“We were supposed to be there,” Murray said. “We could have been killed. Thankfully, everyone’s OK.”

Needless to say, no contracts have been signed.

“Technically, we’re still the proud owners of a home in Satank,” Nicoll said, emphasizing that he didn’t mean that ironically — except for the tree he estimates has a nine-foot diameter that derailed what was supposed to be a smooth transaction.

“We definitely have a connection with Carbondale and Satank; we’ve been there almost five years. We have some very solid friends I feel like I’ve had for a lifetime.”

Those friends and neighbors have helped him maintain his positivity — and the interest of the would-be buyers, despite the damage and delay.

“They were pretty touched,” Murray said. “We were there 10 minutes after it happened. Everyone in the neighborhood came out and offered them a place to stay. I think if anything, it strengthened their desire to be there.”

Nicoll feels similarly about his neighbors. “The word gets out quick in Satank about anything. That whole community has been amazingly and overwhelmingly supportive,” he said.

On Tuesday morning, a four-person crew from Aspen Tree Service arrived on the scene to begin clearing branches from the Nicholls’ property. But the house wasn’t the only property that sustained heavy damage: “Spur of the Moment,” the name RaeAnn Hunter gave her beloved vintage 1964 Jet travel trailer, was another casualty of the tree’s toppling.

She’d taken that trailer around much of the United States, her husband Pat added, noting that the damage had erased most of the Western-themed “spur” decorations that made it so bespoke.

That’s why he so appreciated the Aspen Tree Service team’s willingness to volunteer some time to tackle the main trunk — which remained on the Hunters’ property, from which it fell. He felt that the sooner the tree was removed, the sooner he would be able to transport the trailer to a company in Basalt able to evaluate the extensive damage, thus “removing [his] wife’s anguish.”

For RaeAnn’s part, she took it for granted that the more-than 100-year-old tree would always be a part of her landscape — which makes the whole scenario that much more daunting to her.

“The main part, it’s so big, nobody can figure out how to move it, really,” she said. “If you look at the 1900 photograph of Satank, that tree is there.”

Even Don Nalley, one of Aspen Tree Service’s certified crew members and a 13-year veteran in the business, quipped that it’s “not often” he deals with fallen trees taller than him.

“Usually, this is something we try to prevent,” he said. “If you give us a call, we can come out and  look inside your tree a little bit.” Seismographs are just one of the tools available to an expert to try to determine if a tree should be preemptively removed, he explained before adding that although there are ways to gauge risk, “there’s no way to predict” exactly if or when a tree will come down in an incident like the one that happened Thursday.

Nicoll is just looking forward to being able to move, well, forward. Removing the tree is the first step, according to the insurance company.

“They’re taking very good care of us — the best that they can right now,” he said. “But they said the tree has to be cleared.” Then, the company can send appraisers and begin assessing damage.

“The terminology they use for a modular home is totaled,” Murray clarified. “We don’t know if it’s totaled.”

Until that determination is made, buyer, seller and realtor are in a proverbial real-estate purgatory. The prospective buyers are currently travelling. “When they return in a week, they don’t have a home,” Murray said.

Nicoll is currently staying with a friend in Carbondale. “Plans have changed,” he said, explaining that he had been looking forward to joining his family in Arizona, where he’ll continue his work as a solar engineer. “Now I’m up here, trying to figure out what to do with this property.”

It’s been a bittersweet process.

“We loved it because we had our chickens, our little patch of land and water rights,” Nicoll said of his Satank home. But the cost of living was making the lifestyle unsustainable, he continued.

“I was working two and a half full-time jobs. I felt like I was just kind of dying behind work,” he said. “We definitely have a lot of connections here, and we’ll still come back here, but we felt like we had to leave if we wanted quality of life.”

A bad month for trees

A second, smaller tree fell earlier June 14, also in Satank. The tree landed on a powerline, though no power outages were reported directly from the incident. In a separate windstorm on June 3, a ponderosa pine notable for its history as a host for bald eagles’ nests in Aspen Glen also fell.