Fireworks don’t work during a drought 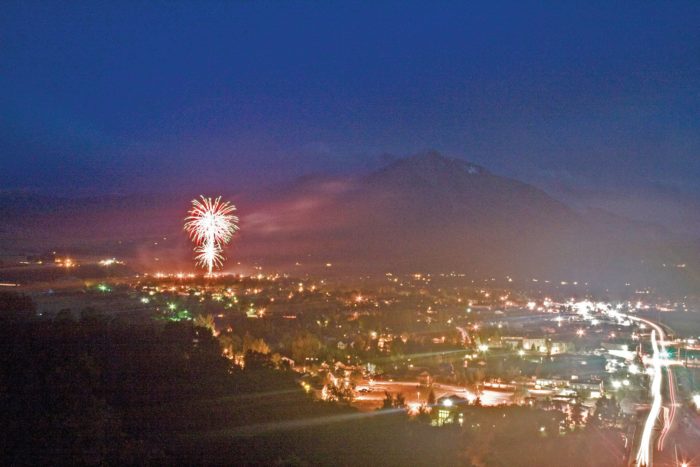 It sounds counterintuitive: it’s legal to sell fireworks in Garfield County, but their use — even in unincorporated areas — is absolutely banned.

“We have the fireworks stand in the west end of our district, and in years like this, it can be pretty controversial,” Carbondale Fire Chief Rob Goodwin said. “The commissioners and the sheriff, they — and I think rightly so — instituted burn restrictions. They were one of the first, and I applaud them for that. It’s just terrible conditions right now.”

But, he acknowledged, decisions about their sale require nuance. On the one hand, there’s a public safety concern. On the other, there are questions about the impact on private business to consider.

“People don’t buy fireworks without the intent to set them off,” Goodwin said. “I also think… that the county commissioners and the sheriff try to walk that line of hav[ing] restrictions, but I think they feel strongly about, in their view, depriving someone from their ability to make a living. That’s a tough place for them to be. I’m glad I didn’t have to make that decision.”

In 2013, Garfield County commissioners did vote to ban both the use and sales of fireworks. A subsequent 2-1 vote overturned the ban on the latter after commissioners heard appeals from Ray Cordova, who operates the fireworks stand near Cattle Creek between Carbondale and Glenwood Springs, to allow sales.

In addition to his argument that people buy fireworks for occasions other than Independence Day, Cordova also told commissioners he felt that there was a “God factor” surrounding the drought and fires that year, saying that the conditions were part of God’s punishment in light of Colorado becoming “such a liberal state,” according to a Post Independent article that ran June 18, 2013.

Tom Jankovsky was the dissenting vote, citing the interests of public health, safety and welfare. “At this time, I would vote the same way I did in 2013, which was our last drought year,” Jankovsky wrote in an email.

“Our conditions right now are just as bad as they’ve ever been, ever,” Goodwin said. “We had a day or two of rain, and that literally does nothing. We need weeks and weeks of rain.”

One thread on the Roaring Fork Swap Facebook page generated 63 comments. Another had to be deleted outright because an administrator felt “people were being very hateful and attacking others,” Ray Alexander — another page administrator — confirmed.

“I was shocked to see a Fireworks Stand near Cattle Creek Rd. With this hot, dry weather & forest fires going on. There are no open burns for campfires, so why is this guy allowed to sell fireworks?” the existing comment reads.

Carbondale resident Hank van Berlo had the same question. So he reached out to Jankovsky.

“I was educated that they have to run a public notice, so it has to be decided by the commissioners whether or not to ban sales 60 days before the actual implementation,” he said about their conversation.

And while the retired firefighter — who fought the Red Canyon fire in 2013 — understands the bureaucratic obstacles to creating an official ban on sales, he didn’t sugarcoat his personal feelings about the matter.

“I think it’s unconscionable to allow the sale but not the use,” he said, mirroring the sentiment of many of the 63 comments on the Roaring Fork Swap page.

Cordova declined to comment for this story — but his stand is not the only place from which people can buy fireworks. One employee at a Rock Springs, Wyo. shop confirmed that he sees plenty of customers from Colorado. Whereas anything that leaves the ground is illegal in Colorado regardless of additional fire restrictions, that’s not the case in Wyoming.

“It’s illegal to shoot those in Colorado, but it’s not illegal for him to sell them in Wyoming. He’s not doing anything wrong, technically, by the law,” Goodwin said. “It’s a strange business.”

And while people can legally purchase fireworks, Goodwin is hoping they’ll follow the rules. “Please use your common sense and good judgment. There’s just no substitute for that,” he said.

“They’re a firework,” Goodwin said matter-of-factly. “They’re actually one of the leading causes of fires because we all run around with sparklers.” In fact, in 2012, a 17-year-old was charged with fourth-degree arson after allegedly instigating a brush fire with a sparkler that grew to about two acres below Glenwood Park.

“Anything you light — smoke bombs, the little snake things that we all love — they’re all not allowed,” Goodwin said of the current Stage 1 fire ban. “It’s just as simple as that.”

At least I can still barbecue…

Update: Not with charcoal, now that stage two restrictions are in effect.