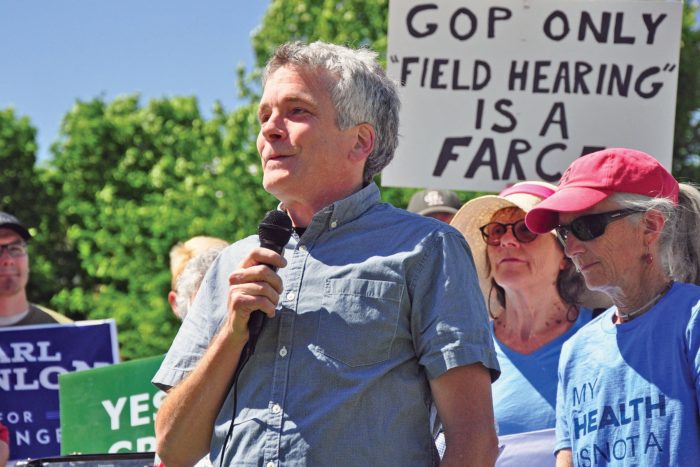 Peter Kolbenschlag can breathe a little easier after a District Court Judge in Delta County, Colorado dismissed a libel suit filed against him by energy company SG Interests.

When an energy company that owns oil, gas, and coal interests throughout the US, donated over $10,000 to Colorado Congressman Scott Tipton’s election campaign and whose owner has $96 million dollars invested in ranchland, filed a lawsuit against him,

“A deputy working as a process server served me on my porch in February, 2017,” he told The Sopris Sun in an email. “My first thoughts were that it was a bunch of bunk and I was going to fight back.”

For the next year and a half, Kolbenschlag didn’t back down. “I lawyered up. That was the first thing. Then I set up a legal defense fund. Then I notified media,” he said.  It all started in 2005 when Houston-based SG Interests (SGI) and Gunnison Energy Corporation (GEC) secretly agreed to jointly bid on four natural gas leases in the Ragged Mountain Wilderness Area. Representatives of both companies attended the bidding event but only SG actually bid. That was part of the plan, according to last week’s decision to dismiss the lawsuit. Under the Memorandum of Understanding (MOU) between the two companies, SGI submitted bids for both companies under its own name and then gave half of the interest in the leases to GEC.

Four years later, Anthony Gale, a former vice president of GEC who had written the MOU on behalf of the company, filed suit against SGI and GEC, exposing fraud against the Federal government. In other words, Gale blew the whistle. He alleged that the companies violated the False Claims Act by stating in the bid documents that there was no collusion.

In 2012, the United States filed a separate suit, charging the companies with violating the Sherman Anti-Trust Act. The government said that it received less revenue for the sale of the leases than if would have if SGI and GEC had not illegally colluded to rig the bids. After a legal back-and-forth, the companies agreed to pay $275,000 each to the Federal government and $451,250 to the whistleblower.

So, where does Peter Kolbenschlag fit into all this? He brought it to public attention in by posting an online comment to a Glenwood Springs Post Independent article (Divide Decision Likely to Land in Court, 11/29/16*) about lease cancellations on the Thompson Divide, some of which were SGI leases. The paper quoted SGI’s Robbie Guinn as saying that it was a “predetermined political decision” to cancel the leases and evidence of improper collusion between the Obama Administration and environmental interests. Kolbenschlag took issue with that and, in his comment, drew attention to the proven collusion between SGI and GEC years earlier.

In turn, SGI hit Kolbenschlag with a libel suit. In a YouTube video, Kolbenschlag calls it a Strategic Lawsuit Against Public Participation or SLAPP.

“It’s something filed against a community member by someone rich and powerful that wants to silence them,” he says. “This isn’t about me,” he adds in the video. “This is about silencing a community. There are a lot of people [in the North Fork Valley] that don’t think this is a good place for fracking and drilling.”  SGI has plans to drill for natural gas near Paonia.

Kolbenschalg has been on pins and needles until last week, when the judge exonerated him, stating that Kolbenschlag’s comment was true therefore not libelous. “Substantial truth is a complete defense against a defamation claim,” wrote Judge Steven Schultz in the Motion.

Eric Sanford, operations and land manager for SGI, told The Sun that he had not read the ruling and could not comment. Robbie Guinn, a vice-president of SGI, did not return phone calls from The Sun but told the Grand Junction Daily Sentinel that he doesn’t know if the company will appeal.

Kolbenschlag said he feels relieved and “as committed as ever”.

*Just as the Post Independent predicted, the Thompson Divide lease situation ended up in court. In a synchronistic turn of events, just two days after the Kolbenschlag case was dismissed, SGI accepted $1.5 million from the Federal government in exchange for cancelling 18 illegally-issued leases on the Thompson Divide.