The little engine that still can 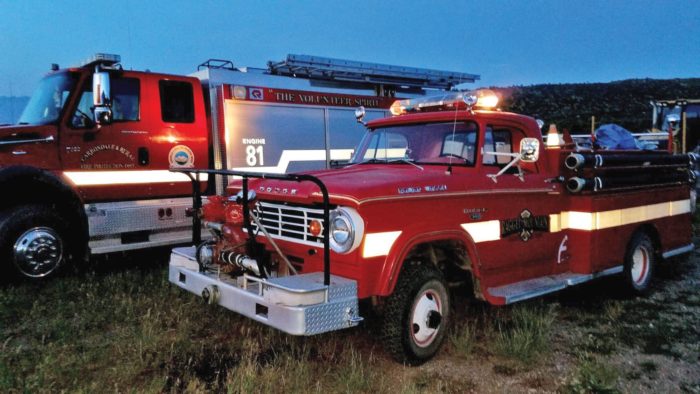 When Carbondale crews arrived on a mutual aid call for the Oak Meadows Fire up Four Mile, Jim Hawkins and his 1965 Dodge PowerWagon fire engine were there ahead of them.

Jim owns Four Mile Creek Bed and Breakfast with his wife, Sharill, but he’s never quite been able to shake his time working for Denver Fire. So, when Will Handville decide to part with a truck that had served in Redstone and the North Fork Valley, Jim jumped at the chance.

“As a retired career firefighter, you kind of like something that’ll shoot water,” he noted. “It’s also fun for parades, but I’m not going to have one that isn’t functional.”

Most folks on Glenwood Springs Fire have since got to know Jim, either through his video tribute for the anniversary of the South Canyon Fire (youtu.be/wf_73RKAu7c), that time he lassoed a bear to rescue it from a cheese ball container (tinyurl.com/y7pywtba) or because he has a tendency to put out spot fires in his neighborhood.

“It’s totally understood that I’ll get out of the way when they get there,” he noted. “If I can get water on it first, I’m gonna do it. It’s only 500 gallons, but if you know how to use it judiciously, you can flank a fire pretty well.”

On this particular occasion, the engine had actually been in storage in Glenwood until the morning of June 15. After parking it — empty — at the B&B, the Hawkinses went into town and came back to find the power off and a plume of smoke up the road. They managed to get their landline working with an older phone, and while Sharill fielded call after call from concerned friends, Jim set off up the hill in search of water.

“It would take me three hours to fill that tank with a garden hose, so I went up to Oak Meadows and hooked onto a hydrant and filled the tank in about three minutes,” he said.

He also managed to connect with Glenwood Fire Chief Gary Tillotson, who handed him a coat and a helmet (he ended up sending Sharill for his own gear rather than stand out in a white hat) and stationed Jim between the fire and the houses on Argonaut Farm “just in case it got that far.”

It didn’t. By 10 p.m., he was back at the B&B with the tank still full, chatting with guests and neighbors by kerosene lamplight.

“It’s gonna be alright,” he said. “They’ve pretty well got this thing contained.”

Drops by small and large fixed-wing aircraft and helicopters had begun blasting the blaze within hours of the first report of a 200-yard brush fire, and ground crews from multiple area agencies were instrumental in the defense.

Power was turned off to the area and a reverse-911 telephone message went out to some of the subdivision residents directing them to evacuate, but folks were allowed to return to their homes before midnight.

“This early effort undoubtedly kept the fire from spreading,” noted a press release from the Garfield County Sheriff’s Office.

By June 25, the fire was entirely contained. No structures were lost, although the fire advanced to within a few hundred yards of some cabins and buildings in the area. Crews were released on June 25 — just in time to snuff a small fire on Iron Mountain near the Glenwood Caverns Adventure Park.

Garfield County remains in high fire danger with stage one restrictions —  with the potential to move to stage two. Jim is the first to tell you how easily a shift in the wind, an ignition point on the other side of the subdivision, or a slower response could have led to a very different outcome. Locals are likely to see more smoke plumes if conditions don’t improve, but if it’s anywhere up Four Mile, they might also spot a vintage truck and a fireman to match.