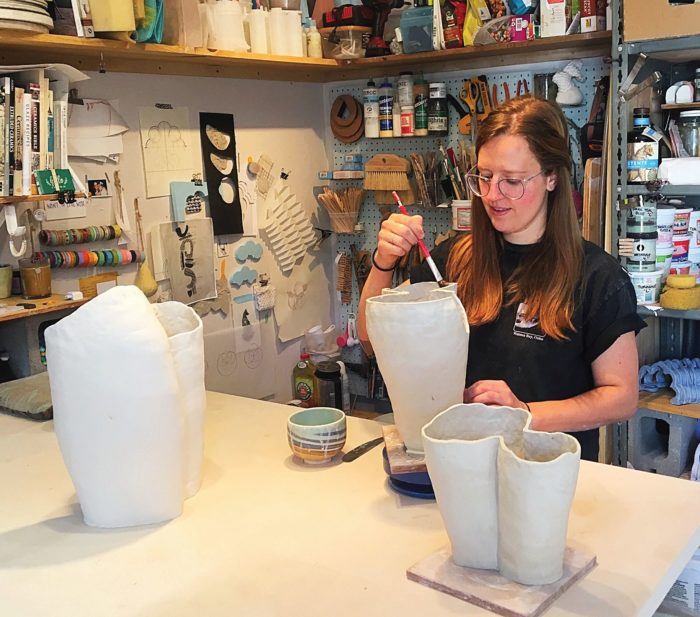 Artists Savanna LaBauve and Stephanie Seguin didn’t know each other when they each arrived in town last September to share a cozy studio space as the Carbondale Clay Center’s newest residents. But after a year of creative cohabitation, each acknowledges the other’s influence.

“I’m really excited to see how our work relates to one another,” Seguin said of their upcoming shared First Friday exhibition. “Each of us have seen the parts that we’re doing, but neither of us have seen it fully realized.”

“We do have our work space divided — but in the gallery, it’s not going to be a line down the middle. Everything is going to be intermixed, which is what we had decided from the beginning,” she said.

Even the exhibition title — Paralleled Pastiche — denotes a sense of interplay.

“Just being in a close space, even if we’re not talking directly about what we’re doing with our work, we can often find conversations that are happening between the work we’re making independently,” Seguin said, adding that’s she’s excited to see how that dynamic manifests in a gallery.

“I think for me, it’s toned-down color palette,” LaBauve said when asked to pinpoint a specific influence from Seguin’s style.

Though she’s decided to focus her scope to her ceramics, LaBauve was an avid painter during her undergraduate pursuits. “Dropping my painting side of things — they were very saturated and vibrant — I think that really shone through. Stephanie has a very limited palette and really loves white on white, and I think I needed time to eliminate surface color and really focus on form. It definitely rubbed off on me.”

At that, Seguin laughed and held up turquoise and magenta paper cutouts from her side of the studio.

“The opposite is happening over here,” she exclaimed. “My vessels are still very monochrome: white on white on white or red on red, but I’m starting to think about, ‘How do I introduce color into the two-dimensional painting aspect of this?’ And whether that’s because I’m seeing tiles of Savanna’s with colors or the flowers she always has in here arranged and drying — I don’t know what it is.”

“One thing I’ve kind of heard over and over working with the vessel is that they start to represent the human figure. Pots kind of do that: they have lips, they have bellies, they have feet, just like people,” she said. “In a small, subtle way, I’d love it if people started to think about that, like put their own projection of personality types onto these pots and see why they’re arranged the way they are.”

Meanwhile, LaBauve has centered her work on process, which often explores the arch shape. “I have this maybe not obsession but fascination with the arch shape [and] how they can tessellate,” she said. “A lot of my work prior to this was about pattern and tessellating shapes and how it looks in 2D and 3D. I’ve decided just to focus on the arch. It’s kind of the connector theme between everything.”

Viewers at Friday’s show can expect “a good mix of things,” LaBauve continued.

And while Clay Center Executive Director Angela Bruno described Paralleled Pastiche as “a culmination of everything they’ve been doing throughout the year,” both artists stressed that it represents a mere midpoint, not a finale, of their time in Carbondale: both women have committed to a second yearlong residency with the center.

“The appeal of [the residency] was to digest what had happened prior in schooling. I think when I initially got here, it was kind of a decompress time, and not so much a make, make, make time,” LaBauve said, mirroring Seguin’s sentiments about their first year sharing the studio. “That kind of happened towards the end of this first year, and ‘Wait, no, I have so much more to do!’”