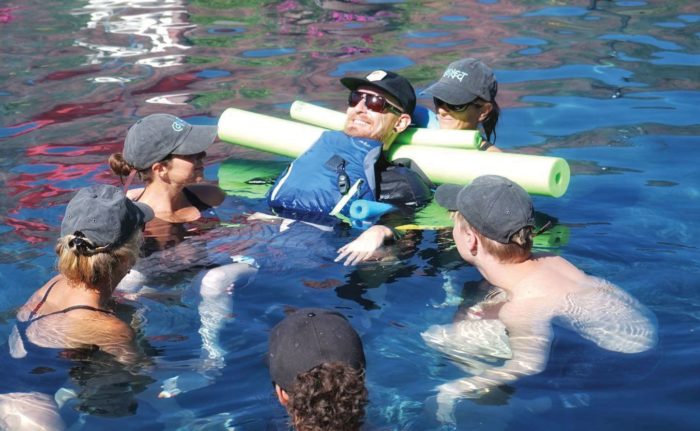 It was the first time Adam Lavender stood in his wife’s embrace in six years. He’d been told by every spinal cord injury (SPI) expert at Craig Hospital that he would never regain mobility after a mountain biking accident in 2012. He was, and always would be, a quadriplegic.

Yet after a month-long pilot program developed by Lauryn Moloney-Gepfert, founder and executive director of the Carbondale-based Neuroplastic Functional Institute (NFI), Lavender stood — independently — in the pool at Iron Mountain Hot Springs.

“Prior to that… we had to have three or four people assisting him in every little thing he did,” Moloney-Gepfert said. “Then this electrifying thing happened, and his brain connected with his body. He started moving, and then he stood up in the pool.”

The program, called Connect, trained four candidates — Lavender, Soren Lindholm, Ben Jenkins and Tucker Larrieu — with varying paralysis over a four-week period. Moloney-Gepfert, a Yale Medical School graduate who began her work in neuroplasticity in 1977, uses a combination of specific techniques to remap the brain by combining neuroplasticity, kinesiology and what she calls life education: mindfully shifting from an adrenaline-fueled, fight-or-flight space to a relaxed, open place amenable to learning.

“I began to teach them how to use their brain and how to use all different kinds of neurostimulation to be able to have input into the brain from the sensory nervous system to be able to tell the motor system what to do and… yeah. People who were paralyzed started getting better,” she said. “That’s my story, and I’m sticking to it.”

It’s more than a story. The team behind the Healing Out Loud Institute, the nonprofit arm of NFI, ensured that every step of the Connect program was well documented. They’re consulting with True Media Foundation to package their footage into a documentary. Tales of the work even inspired a single $28,000 donation on July 1 — just days after the participants celebrated their graduation from the first stage of work (there will be three- and six-month followups).

“All of this has been very carefully documented,” Lynn Kirchner, one of the program’s advocates, said. “[The participants] are all medically documented, monitored. We have a nurse here who takes vitals before, during and after each session. It’s very factual. Nobody’s going to blow holes on this.”

Everyone involved is prepared to share the results of the initial Connect training — all four participants accomplished demonstrable milestones toward functionality in the water — but Lavender acknowledges it will be a challenge to gain acceptance among conventional medical institutions.

“We’re taught to adapt to where we’re at and learn how to make our lives as good as we can with no expectation of getting better, so we’re not given any tools at all to improve our situation. As soon as you start talking about your soul and your spirit, that doesn’t fit in the post-industrial perception of the human body as a machine,” he said of the holistic approach.

“I’m still in the upward curve, where I’d established movement for the very first time in the water, but I’m still in the range where I can’t jump out of the water and do party tricks. But for someone who’s really ingrained in the physical therapy world, it’s all about stabilizing something, isolating something… instead of ‘be as elastic as you can be and feel your spine moving.’ In the medical world, it’s ‘Oh, that’s too ambiguous. You might be compensating.’ But that doesn’t matter to someone like me. To me, it matters that it’s happening. It doesn’t matter what they’re writing on their chart.”

It doesn’t matter to the families of those injured, either. For Kathy Lindholm, she’s just thankful her son Soren, an 18-year-old Colorado Rocky Mountain School graduate, has found a way to manage his pain after a skiing accident left him completely paralyzed below the waist last year.

“When there’s a spinal cord injury, your level of neuropathic pain can be 1-10, and everybody falls in a different place,” she said. “Soren’s got 10. A lot of the work Lauryn does with Soren is pain, [which] is almost, for me, the most important work she does with him. She keeps me going, because otherwise…” she trailed off, looking toward the pool and her son.

Since beginning his neuroplastic functionality training, Soren has become committed to 100-percent functionality. In the water, he’s able to make jogging and cycling motions — something that, like everyone in the program, had been told never to expect.

“There’s words I wish doctors would eliminate from their vocabulary, and never is one of them,” Kirchner said. “That word should not exist.”

Tucker Larrieu, a 21-year-old professional dirt biker from California who was paralyzed in a racing accident, can now swim on his back, kicking each knee, without a life jacket. At Craig Hospital, he received no lower body rehabilitation, as it was seen as squandered effort.

“We are going to do some GoPro footage hopefully, do some Facetime. We’ll communicate back and forth on his progress,” his mother Wendy said of the next steps now that they’ve returned home.

“It has to be a nonstop process because nonuse is a pattern,” Lavender said of the future. “Nonuse is a neurological path. One of the most amazing outcomes of it is I am 100 percent convinced that complete, normal function of my entire body is possible. There’s just no magic pill. I have to put in the work.”