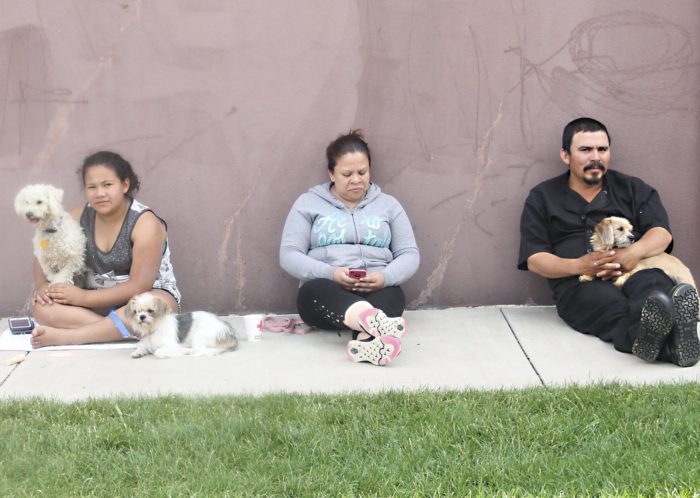 When disaster strikes, people want information. That was certainly true in the wake of the dramatic Lake Christine Fire that necessitated mandatory evacuations of about 500 homes in the midvalley.

Public officials did their best to disseminate updates to the media, which turned around and posted to readers. The evacuation center at Roaring Fork High School received more people asking how to best offer assistance than people seeking shelter.

But not all informational pursuits were met warmly — in particular, when an Eagle County Sheriff’s Department official arrived at RFHS with equipment to print official identification cards to registered evacuees, organizers turned her away.

“We told her no,” said Ray Alexander, a leading organizer at the center, adding that she was welcome to offer IDs to people outside of the shelter if they voluntarily accepted one. “She got upset, but we were like, ‘We don’t care. This is not Eagle County.’ Because we knew right away, most of these families would not be here [if that happened], and they had nowhere else to go. Can you imagine what that would be like? It would clear this place out.”

The RFHS evacuation center opened in response to the the mandatory evacuations in Missouri Heights and El Jebel Mobile Home Park on July 4. According to Suburban Stats Inc., which compiles data from the most recent U.S. Census, 39 percent of the population in El Jebel is Latino.

After that confrontation, the tension at the center was palpable, Alexander (who is fluent in Spanish) explained.

“Most people here, they’re very nervous,” he said during a July 5 morning interview. “Most of them are Hispanic that are still here. I had a long talk with them.”

Alexander, for his part, is no stranger to tough conversations during emergencies.

“I spent two months in Thailand after the tsunami and a month and a half in New Orleans after Katrina,” he said. In addition to ensuring people had access to needed supplies, that also meant helping families of the deceased. Comparatively speaking, the evacuation center felt “pretty easy,” he added.

But for those who had spent the night sleeping  in a cot in the high school gymnasium — if they slept at all, Alexander noted — there were many feelings, but ease wasn’t one of them.

And then the rumors began spreading almost as fast as the fire.

Translation: Rumors of ICE (Migration) outside of the shelters, this information is completely false, please go if you need help or contact us for any information or questions at 970-445-4911.

Samuel Bernal of Spanish radio station La Tricolor saw the tweet and shared it on the Montañas Unidas Facebook page.

“It’s good because everybody’s very willing to kill that rumor,” he said. “One of the Basalt officers wanted to make sure [he was available if] anybody had any questions about something and he was very sorry about this rumor. Everybody was very worried about that rumor.”

That said, of the myriad messages Bernal received from listeners about the fire, the rumor about U.S Immigration and Customs Enforcement officers targeting evacuation centers wasn’t the subject of a single question.

“I suppose that maybe some people got afraid because they saw a police car or something. That could happen, but we didn’t get any questions about that,” Bernal said.

Instead, people simply wanted to know how they could help.

“It’s very sweet. People asking where they can donate, where they can bring food,” he said. When people heard that the Martinez family, who lost their home in the fire, needed clothing for their daughters, the response was overwhelming, he continued, describing the “beautiful community.”

Still, the rumor reflected the general fear felt by much of the Latino community toward authorities in the current political climate. Sandra Lopez, an undocumented immigrant from Mexico whose asylum case was recently denied, got emotional when she thought about what would happen if she had to evacuate from the Two Rivers Unitarian parsonage, where she lives in sanctuary.

“Thank God that it was a false alarm,” she said in Spanish. “Imagine if I, in a fire emergency, that I had to leave refuge, and then find myself with ICE!”

Lopez has not left the parsonage in eight months. With that constant stress, she understands how information — even false information, which she acknowledged isn’t a good thing — gets spread.

“Por eso tenemos que cuando hay una emergencia protegernos unos a los otros,” she said. (That is why we have to protect each other when there is an emergency.) And that applies to the entire community in a disaster, regardless of immigration status, she emphasized.

Fortunately, this community has done just that.