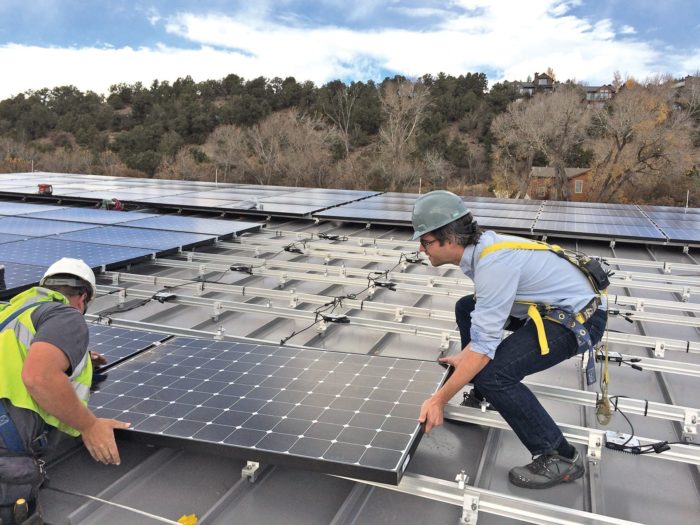 Two local solar installers say the 30 percent federal tariff imposed in January on solar imports is not hurting them so far.

The industry saw the tariff coming and bought extra product from abroad before it went into effect. What’s more, a change in Chinese policy may lead to costs going so low that the tariff isn’t felt by many consumer for some time. What could impact your solar costs, though, is the end of the federal tax credit, a 30 percent savings on installation expected to begin winding down in 2019.

Red flags went flying when Reuters published a report last month that $2.5 billion worth of large solar projects had been cancelled as a result of the tariff, and that only $1 billion in new spending was planned to take advantage of the new import tax. Large scale projects seem to have been hit particularly hard.

According to the Solar Energy Industries Association, Colorado has nearly 6,800 solar jobs, 452 solar manufacturing or installation companies, and boasts over 200,000 homes powered by solar. And according to one local company, forward thinking and some changes in China could keep prices comfortable.

Katharine Rushton is the commercial sales manager for Carbondale-based Sunsense Solar. “We really strategized to make sure we had a lot of product in the country before the tariffs hit,” she said. “That really gave us a cushion, at least for the first half of the year.”

Ken Olsen is the owner of SoL Energy, also based in Carbondale. “We haven’t seen our prices increase due to the tariffs,” he said.

According to Rushton, policy changes in China could further mitigate the price increases. China had plans to continue installing solar, but recently announced that installations would stop. Why they decided that is not clear, but it does mean the global market for solar panels will be flooded with all that product they already manufactured. Rushton thinks it will be enough to outweigh the tariff. “All manufacturers, whether they’re in Korea or Singapore or Canada are going to be affected by that. Prices are probably going to go down fairly substantially,” she said.

There are also aluminum and steel tariffs that could impact the price of the racking built under the panels, and rumors the administration will increase the solar tariff another 20 percent, but from what Sunsense has seen, those increases may be tempered by the global market price decrease. “Even with that additional 20 percent, module prices are going to be less than they are right now.”

Rushton had some advice for consumers as well. “The other thing people should bear in mind is that what’s driving the solar industry in the U.S. is not really so much these small modifications in equipment pricing, it’s the federal tax credit. It adds a huge amount of value, 30 percent of your system costs… And so if you’re thinking of installing solar on your residence, you’ve got two years in which to do that… It’s something to start initiating and thinking about soon, because if you wait until the end of that two year period, there’s a good chance you’re not going to be able to find a solar installer to help you out.”

The tariff is also set to decrease incrementally and settle at 15 percent in year four.

Whatever happens with the tariffs, policy changes, and tax credits, according to SoL Energy’s Ken Olson, “the future for solar is very bright and people should consider using it for producing clean renewable electricity.”