The Sun’s guide to summiting Sopris 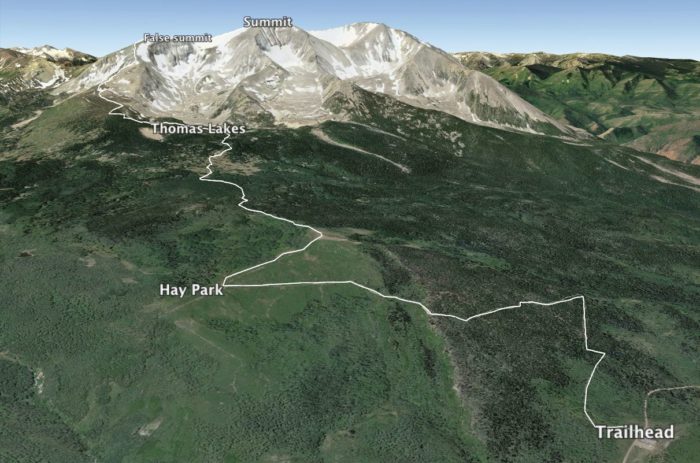 GETTING THERE: Heading south from Carbondale on Highway 133, turn left on Prince Creek Road and continue about six miles to the saddle above West Sopris Creek. Take a right at the fork and look for the trailhead on your left about two miles up. If you reach Dinkle Lake, you’ve gone too far. The trail itself is roughly 13 miles round trip with 4,000 feet of elevation gain. Graphic constructed in Google Earth.

It’s hard to look at Mount Sopris looming over the Valley and not think of climbing it.

At 12,965 feet for both peaks, it’s far short of the fourteener status that usually attracts mountaineers, but its prominence and beauty more than make up for it. It’s the source of our water and a local barometer for the variation and passage of the seasons.

“Mount Sopris is something that everybody refers to very lovingly and personally,” Carbondale Trustee Lani Kitching said. “It’s very hard to describe for someone who isn’t of that inclination.”

It’s considered a right of passage in some circles, and is accessible enough that many have achieved it.

“It has its challenges. It greets you with a nice scree hill, but it’s good for you,” Kitching noted. “It’s a good training mountain.”

The sheer range of skill levels involved, however, can make it hard for a prospective first-timer to accurately gauge its difficulty and plan accordingly. Your ultramarathoner friend might call it a “walk up” — and it’s true that the standard route is basically just a long, rough hike without any seriously technical sections. But your aunt who did it after coming from sea level would also be perfectly correct in emphasizing the psychological and physical impacts of strenuous exertion above timber line.

Shelly Braudis, Recreation Manager for the Aspen Sopris Ranger District, does her best to walk that line.

“It’s not my job to say you can or can’t do something,” she said. “I provide the info people need to be as safe and have the best experience possible.

Elliot Norquist has quit counting the number of times he’s been to the top of Sopris — he did it at least once a summer with students during his teaching tenure at Colorado Rocky Mountain School — but one occasion in particular stands out.

“It was a hot day, summer afternoon. I was irrigating for Bob Perry and got some time off, so I went up there with nothing but a water bottle and a pair of shorts on,” he recalled “I’d seen some clouds, and when I got up to the very top and there was this big mean storm coming right over from Avalanche. Damn if someone hadn’t left a big white wool sweater on the summit. I was saved.”

If you don’t want to rely on strangers with sweaters, consider the “10 Essentials” — navigation, sun protection, insulation, illumination, first aid, fire, food, tools, hydration and emergency shelter. Bear-proof containers are required for backpackers, and fire restrictions certainly apply. Also, if you’re bringing your kids or dog, be sure to consult the list for them, too.

Braudis is a particular proponent of sturdy shoes and a real, waterproof topographic map — not a printout or your phone.

“I think people rely on cell phones too much,” she said. “It’s a false sense of security.”

That said, there’s service almost all the way up, so it’s worth having it along with a full charge just in case. Regardless, it’s always worth making sure someone back home knows where you are and when you should be back.

Norquist’s anecdote also illustrates how unpredictable and dramatic weather can be on the heights. Choose a day with a low chance of precipitation and relatively little wind, and plan to be headed down around noon.

“Sopris is not the place you want to be when those afternoon rain storms come in and lightning starts striking,” Braudis cautioned.

As you might surmise from the timing of this guide, late summer through early fall is the ideal time for most folks to summit Sopris. Others choose to skin up and ski down in winter, which warrants an entirely different story. One of the perks of the warm months is the chance to camp at or near Thomas Lakes the night before your ascent — trading extra weight for extra time (one dayers generally start at first light or before).

As for where to start, Dinkel Lake is the default from the Carbondale side. Bikers may opt for the Hay Park route, but have to switch to foot on the Wilderness boundary — a stark contrast to the days you could drive all the way to Thomas Lakes.

“It’s not the wild world it was in the ‘70s,” Norquist noted. “With the kind of traffic it gets now, whatever we can do to follow the rules and protect is probably the way to do it.”

When you get to the top, you’ll also have to decide whether to make the trip to the second summit (not counting the false summit, which can be discouraging for folks who think they’re almost there).

“If it’s a nice day, I like going out there,” Norquist said. “It’s not that much of a walk, and it’s a different view.”

Make sure to save some steam for the descent. Both Kitching and Braudis cited it as the stretch you’re most likely to feel the next morning. Once you’re off the summit, you can take your time. It’s not a race — though if it is, the time to beat from trailhead to summit is Ryan Phebus’s 1:26:33 as logged on July 15, 2017 at strava.com.

“I feel like my slips and falls happen while I try to walk and take in the the view,” Braudis said.

“You’ve worked hard for it; stop and enjoy it.”

And if the weather turns sour, someone in your group gets sick or hurt or you just don’t think you have it in you that day, “know when to say when.”

The Mountain will still be there tomorrow.