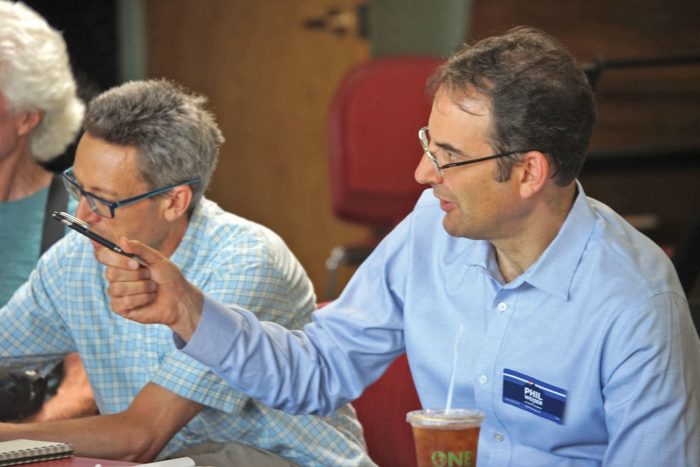 The state attorney general can be a deeply personalized political office that plays an active role in protecting Coloradan interests —  at least it should be, according to Democratic candidate Phil Weiser, who came through Carbondale last week in a series of roundtables to introduce himself to Roaring Fork Valley voters.

“The attorney general is the lawyer for the people of Colorado. Your rights as a citizen, as a consumer, are protected by the attorney general,” Weiser said. “This is a critical position. It’s the only one that can defend you not just against companies that might take advantage of you, but the federal government doing things that are unconstitutional in some cases or in other cases illegal. And there is so much at stake right now.”

Weiser, who narrowly defeated three-time Colorado Rep. Joe Salazar in the primary election, served as dean of the University of Colorado’s law school for five years. And though this is his first campaign as a candidate, he’s certainly not new to politics, having served in both the Clinton and Obama administrations — he did a 10-month stint as deputy assistant attorney general in the Justice Department’s antitrust division before being appointed senior adviser for technology and innovation to the National Economic Council director in 2010.

And while Weiser’s courtroom experience is limited — he’s litigated a mere six cases, though that’s six more than current Attorney General Cynthia Coffman, according to a June 26 Westword article — the attorney general’s office is much more about legal strategy and management, of which he has ample experience, he emphasized.

“You should hire a creative problem solver with the right legal expertise and leadership ability to make this office an office for the people that works on their behalf for progress,” he said about the November election.

As for what that creative problem solving can look like, Weiser listed “regulation, contracts, calling people out to take best practice on areas” in addition to litigation, though he’s not shy about using that option.

Weiser pointed to Maryland Attorney General Brian Frosh and Pennsylvania Attorney General Josh Shapiro being particularly outspoken in their support of the Affordable Care Act and environmental protections as examples of state attorneys general representing citizens’ best interests and said he would do the same.

Weiser also addressed concerns about the future of Roe vs. Wade and access to abortion as a right in light of Brett Kavanaugh’s nomination to the U.S. Supreme Court.

“I’ll fight for this right, all the way to the Supreme Court, to the best of my ability,” he said. I’m running against someone who believes Roe v. Wade should be overturned. If we lose that battle, then it goes to the states.”

State policy has enormous influence on a woman’s access to birth control and reproductive health regardless of national precedent, he stressed.

“Our current Attorney General Cindy Hoffman, has sided against Planned Parenthood in important cases, seeking to undermine their ability to provide reproductive health services. She got overruled in that case, but it shows you the power of the office,” he said. “So this matters. This issue of the rights of women to control their bodies, it’s on the ballot.”

Health is the mainstay for most of Weiser’s political positions, whether it manifests in his desire to hold pharmaceutical companies accountable for misleading advertising that contributed to the opioid epidemic or ensuring environmental protections are enforced.

“Climate change is real,” he said, noting that Colorado’s water rights will become increasingly in the legal spotlight. “We’re in drought conditions. It’s having a whole series of implications, and water is at the center of it. We need water for our agriculture, we need it for industrial use and we need it for residential use. And we can’t allow ourselves to descend into a war, all of us fighting against each other and fighting surrounding states,” he added.

He is prepared to commit to environmental protections regardless of the actions of the federal government — and that’s part of the attorney general’s job description, he continued.

“If the federal government doesn’t do their job, you have independent authority to enforce environmental laws and antitrust laws,” he said.

That means protecting consumers’ interests, too.

“We have more concentration in our economy right now than we’ve ever had. That is a danger sign that we need to react with vigilance,” he said, offering an example of two prominent airlines merging as something he would combat as attorney general. “That would be a merger that would really hurt Colorado consumers. As AG here in Colorado, I have the expertise, the will, the ability to make sure that we stopped anything from happening that was going to raise prices to our consumers. That’s true in airlines; it’s true in healthcare.”

Editor’s note: The Sun intends to provide equal coverage for any current candidates who hold public events in Carbondale with adequate notice.