Piecing together an angel 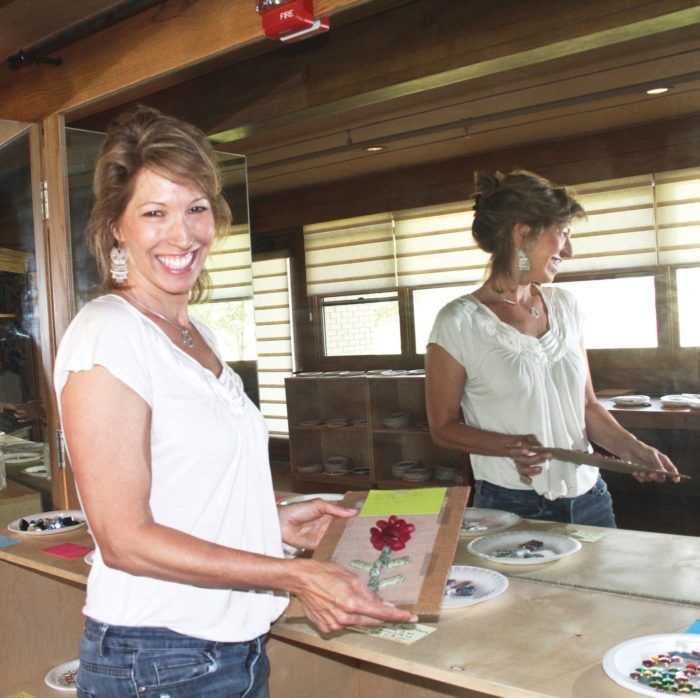 Diane Orlov’s studio space in the Third Street Center is filled with hundreds of carefully stored plates, each harboring glass pebbles in different sizes and colors arranged in different designs. But those plates aren’t the designs’ final destination: they’re pieces that will create a larger whole on an 8-foot-by-12-foot mosaic in Glenwood Springs.

Orlov, in partnership with Compassion Aspen, has spent the last two years cultivating a community within a community, reaching out to numerous nonprofits in the Valley that would be willing to lend literal helping hands to create Angel of Hope Roaring Fork — a second iteration of an artistic vision that came to Orlov in a dream more than six years ago.

“It was an angel painting that hung above my daughter’s bed, and it came to me in a mosaic,” Orlov said. It would serve as both inspiration to uplift others and foreshadowing for her own life.

“I felt like I was supposed to do this with children, but I didn’t know where,” she said of her initial urge to create a physical manifestation of the mosaic in her dream, albeit at a larger scale. At the time, she was living in Tampa, Fla., where she had a painting and decorative plaster business. “An interior designer I was working for was on the board of the Children’s Cancer Center. I told her about it, and she introduced me to the people at the center.”

Suddenly, Orlov was spearheading what would become a 14-month project, working with patients and their families and caregivers to create designs that would comprise the mosaic.

“I had no idea what I was getting myself into, trying to work with pediatric cancer patients, hemophilia, psychosemia patients who couldn’t touch glass or adhesives,” she said of that first effort. “That’s why I came up with the idea to do these designs on a plate, where the kids would never have to touch these things and it would be completely safe. It was a completely backwards way of mosaicing!”

The Angel of Hope at the Children’s Cancer Center became symbolic for its young patients precisely because it was a mosaic.

“The thing was basically, ‘How many hands and hearts does it take to care for this life? To be a guardian?’” Orlov recounted. “That was always the theme at the center, that you never have to fight your battles alone. That’s why I wanted them to have an angel to protect them.”

Putting the pieces back together

At the cancer center, the mosaic represented individual stories coming together to create something supportive and beautiful. But the very nature of a mosaic is that it’s a broken image. Orlov felt that brokenness acutely when her 24-year-old daughter died unexpectedly.

“I had had the intention of doing this project again when I moved here,” she said. “Not under those circumstances, of course.”

Orlov didn’t pursue those intentions in her new Colorado home — not at first.

“After a couple of years of merely surviving, I felt such an outpouring of love from Pathfinders,” she said of the Aspen-based nonprofit that offers grief support. “[Program Director] Allison Daily was an angel to me.”

Daily wouldn’t be the only angel Orlov recognized in her life.

“Gabrielle Greeves from Windwalkers believed in my vision. I started going to the Unitarian church. I started to just feel like I didn’t have to really fight this battle alone,” she said. It was the same sentiment that the Children’s Cancer Center touted.

“This became the reality in my life: picking up my own brokenness, putting it back together with love and feeling like I wasn’t alone in that battle,” she continued.

Rejuvenated, Orlov recommitted to her vision.

“I didn’t have much of my own spirit left, but I made a promise to my daughter that I would do this,” she said. “It became obvious why her angel came back to me as a mosaic.”

This time, though, she didn’t want to limit the scope of participants to those affected by cancer. That meant coordinating with many more organizations and the interfaith communities in order to reach “as many as people as possible,” she explained.

She was grateful to learn that many faith-based entities maintain active relationships in the Valley, despite differing beliefs.

“I personally believe that without faith, there is no healing. Whatever it is, everybody believes in something. We are putting it at [St. Stephen Church], but it is an invitation to find your own faith in your own way, however it is for you,” she said. The Aspen Jewish Congregation, Two Rivers Unitarian Universalist and the Way of Compassion also support the endeavor, she added.

Even the angel image is not meant to necessarily connote religiosity. “It’s really just about guardianship,” Orlov emphasized, adding that many pieces are dedicated to pets.

“One of the themes of this is that all of us have a story, and all of our stories are interwoven,” she said. But she wants to protect the integrity of each piece as well, so she’s documenting the individual designs and their affiliated stories for a book.

Allyn Harvey, who serves on an advisory board to the project, will be one of those whose story inspired a design. “I’m not much of a cryer, but when I did my piece for my godfather who died last year, I was crying by the end of it,” he said.

Orlov plans to unveil the Angel of Hope in September 2019. And while there is much to do (gofundme.com/AspenAngel for more information), she’s envisioning an installation close to the sidewalk, where people can touch and feel the energy in the work. “It’s sort of like a braille for the soul,” she said.