Setting the stage for Mountain Fair 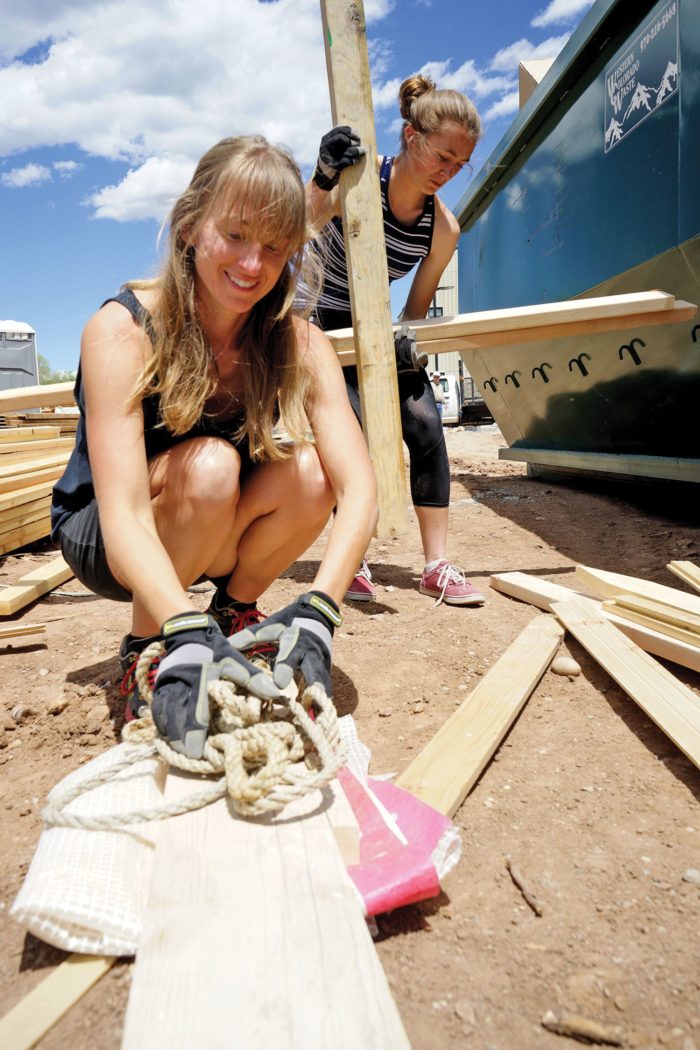 Two weeks ago, artist Lindsay Jones was sitting outside her garden-level apartment in Carbondale with a dozen or more wooden plant-inspired shapes scattered on the ground around her.

Some as big as six feet around, they were the art pieces for one of her largest art installations to date. She had white flowers with flowing petals and stringy stamens and pistils outlined in thick black lines. There were teal pods on stalks, coral vines and yellow leaves. Four tall letters spelled out “LOVE.”

An array of community members from throughout the valley come together to help with the barn-raising that is the Carbondale Mountain Fair, and Jones was commissioned to design the stage for the 47th run of the event. As she sat on her patio, paintbrush in hand, Jones carefully considered whether she wanted all of the similar leaf types to be painted the same color. She admitted that no one would know if she didn’t follow her own drawing. Still, it was important to her.

“Originally, I was going to do all black and white, with a couple pops of color like my drawings, but I decided to add more color,” Jones said, explaining that the style is in an art nouveau theme to reference this year’s poster design. “I’m being too picky. I need to make a decision and just do it. It’ll be good either way. That’s what takes the most time — figuring out what the heck you want to do. It’s not the actual process of doing it… well, that’s a lie.”

Jones has been working for about three months — sketching, illustrating on the computer, digitally collaging the different parts, collecting repurposed materials, cutting and more. She says she doesn’t have an accurate sense of how much time she has spent on the project. “I just figured it’d be a billion hours, and I wouldn’t keep track. It’s been a lot.”

Carbondale Arts Executive Director Amy Kimberly approached Jones to design the stage some time in January. Although Jones had done some commercial work locally (such as designing patterns for cycling apparel for Aloha Mountain Cyclery), exhibited her work at Anderson Ranch, and designed posters on a volunteer basis for Bonedale Bike Week, her work wasn’t widely known among the Carbondale community until her show “Pattern Recognition” in September 2017 at the Launchpad.

Originally from Kansas City, Jones moved to Carbondale eight years ago. She is a contemporary artist, textile designer and graphic designer, who works in a variety of media, including drawing, painting, digital art, sculptural constructions and installations. According to her artist’s bio, her artwork “reflects on ideas of landscapes and environments that are built, altered, shaped and manipulated, while using playful patterns and abstracted imagery.”

“My work is the result of my observations of the landscape: the rural, the urban, the exquisite, the boring, the natural, the unnatural. I find myself both in awe of, as well as disturbed by, the way that we build, and transform our environments, and believe that humanity will always be trying to figure out how to negotiate our life in this shared environment,” she says in her artist’s statement.

The flowers, vines, leaves and pods have been cut from wood found in Carbondale dumpsters. Jones’ goal for the project is to have the stage art be made almost entirely of discarded and up-cycled materials. She had a few “exciting dumpster diving expeditions” to fetch plywood, tarps, and other materials and even needed a tetanus shot after one ambitious dumpster run.

“So far, the only new materials I’ve had to purchase are one can of paint and a bottle of wood glue,” Jones said in a June 27 Instagram post.

She received help from Colorado Rocky Mountain School (CRMS) student Emi Bauer, who interned with Jones for her senior project. “It’s like a view into the art world in the Carbondale community,” Bauer said. Bauer and Jones met at CRMS, where Jones taught visual arts for two years.

“Helping Lindsay with the Mountain Fair stage has been cool. This morning, my first adventure was just riding around looking for wood in Carbondale and asking people if we can have it,” Bauer said after dumpster diving in early May.

Bauer additionally primed all of the wood, and Jones gave Bauer a tutorial on graphic design software and about commercial pattern design. (Jones has done work for Nikita Clothing, Shredly, Pakems, Oaki, Rocket Dog Shoes and Stio among others.)

Other community members have helped along the way. Jones originally was going to cut the wooden shapes, but Corey Summers of Summers Design volunteered to cut them with his CNC router. Dru Handy Custom Painting donated paint. Volunteers are helping Jones this week install the pieces onto the “canvas” — the upper triangle of the gazebo, which measures 20 feet in length at the base.

Jones normally works on a very small scale. She accepted the prominent job to design the stage to push her own artistic boundaries.

“My drawings are fairly small; I’m using a .05 mm pen or whatever, so my stuff’s very detailed,” she said. “I’ve been wanting to go big for a while. Working at this scale is forcing me to think about the stuff I normally draw in a different way, and that has been really fun.”

Eight days before Mountain Fair, Jones was nearly done with the individual art pieces. She was off to install her show “Unfamiliar Landscape” at Plug Projects Gallery in Kansas City, then to network at the Outdoor Retailer trade show in Denver. Despite having completed the heavy mental lifting of design, installation and the fair itself were still to come. She expressed some of her fears: What if a piece falls? What if it turns out some paint was not exterior paint and a huge monsoon comes and makes the colors run?

Those fears, she says, will force her to go above and beyond to ensure those things won’t happen. Still, she mused: “It will become an interactive watercolor at that point. We’ll all get up there and start smearing it around.”

And that is the spirit of Mountain Fair — a community-supported, grassroots, go-with-the-flow barn-raising where the girl next door designed the stage.