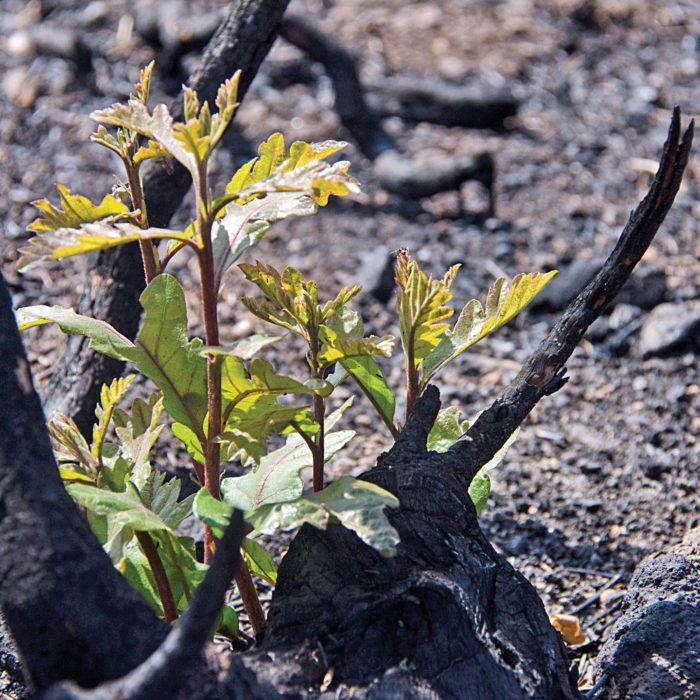 Even as the Lake Christine Fire continues to smolder within its increasingly secure cage of containment, the areas it first scorched nearly a month ago are already showing signs of recovery.

The charred landscape just north of Basalt feels post-apocalyptic, but new sprigs of gambel oak poke up among charred sticks, a few blades of grass poke up from the ash and birds and butterflies find purchase on trees with a few yellow needles left.

The spot, on the Basalt State Wildlife Refuge up the road from the shooting range where it all began (and which competing online petitions are clashing over) is apparently fairly representative for this side of the mountain. It’s labeled “intermediate” on a map of vegetation damage rendered from before and after satellite imagery. The Burned Area Emergency Response (BAER) Team is here to verify things on the ground — and give the local media a peek behind the curtain in the process.

Firefighters call the burned-out land “the black,” but soil scientist Beth Anderson is more concerned about white and red as indicators of severe damage to the landscape. As she sifts through the bare dirt, the blackened parts reveal roots just under the surface and clods that hold together. Where a log smoldered, ash and dirt just fall apart.

Numerous factors determine the damage to the soil, team leader Liz Schnackerberg explains. A dramatic crown fire, while a nightmare for firefighters, can sweep through an area quickly and leave the ground intact while a slow, smoldering blaze is much more problematic after the fact.

There’s more of that on the other side of the mountain, toward Cattle Creek. BAER will cross that bridge once the fire’s out and more immediate impacts are assessed.

First on the list of concerns is flooding, with big burn scars just upstream from the same subdivisions that were under pre-evacuation orders from the fire itself until last week. Vegetation and healthy soil soak up precipitation, and even then flash floods have been an issue on the slopes of Basalt Mountain. Add in a less permeable surface and plenty of debris, and each new storm brings cause for concern.

Luckily, according to Schnackerberg, the “broken” landscape on the south side of the burn doesn’t give big flows much chance to get rolling, and many smaller drainages have relatively flat sections which would temper the ferocity of a flood. As for the potentially more damaged sections to the north, Cattle Creek — with intact vegetation along its banks, a wide channel and floodplains — should be able to take it.

Still, the ideal outlook for the next few months is intermittent gentle rain rather than dramatic downpours. If all goes well, there could be grass on the hillsides before the fall, fireweed in years to come and a return to a similar, if younger version of what it was a decade down the road — provided invasive species don’t get there first.

In the meantime, though, the group finds it wise to clear out as a storm looms over the hill, and by the time we pass the miraculously intact power station and Lake Christine itself (what’s left of it after being dumped on its namesake), it looks like the land behind us has been blown away.