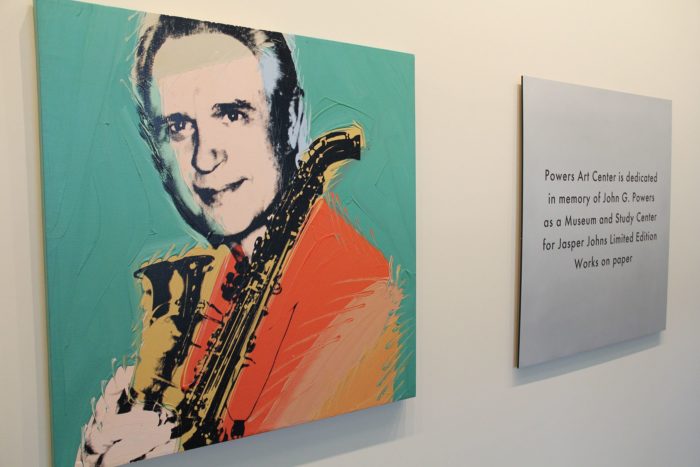 “This one is especially close to my heart because it’s the original collection,” English said of the exhibit, explaining that, since the museum’s focus has been Jasper Johns since its opening in 2014, the operating foundation acquired multiples, creating a complete collection of Johns’ limited edition works on paper.

“That’s why we are able to change his exhibits once a year and present different approaches to Jasper’s art,” English said. Because the museum is the legacy of John Powers, who died in 1999, the exhibits come directly from the John and Kimiko Powers Collection as donations, so the center doesn’t require loans from outside museums. In fact, the opposite is true: the Powers Art Center often loans its pieces, such as when it recently sent a few smaller Johns works to The Broad in Los Angeles.

“I know every piece, but when I hang it again at a different a gallery or see it in in a different light, I see things I haven’t seen before,” English said of Johns’ art. “There’s so much depth to his work; it’s really neverending.”

Every aspect of the Powers Arts Center is a nod to its namesake, from the Japanese architecture — in addition to American pop art, Powers dedicated much of his collection to Japanese art from the fifth through 19th centuries — to the saxophones displayed in cases on the first floor.

The latter was his wife Kimiko’s idea.

“He played saxophone at a very accomplished level, to where he could jam with Count Basie,” English said. “He played whenever he could. He played with the Walt Smith Trio. It was definitely a hobby for John Powers.”

That hobby helped fund his education, which included Princeton and Harvard Law.

“He did a lot of early, groundbreaking tax work,” English continued of his legal career. He later pivoted from private practice to the publishing world, joining Prentice-Hall first as general counsel and retiring in his forties as president.

But throughout his life, saxophone and art were his mainstay passions — which his friend, Andy Warhol, immortalized in a portrait that greets museum goers at the entrance. In it, Powers is holding his favorite saxophone.

“During that era, in the 60s, when all the pop artists were emerging, collectors of course were patrons, but they became friends with the artist,” English said. “It was a different time, and they would go and visit them in their studios.”

Andy Warhol and John Powers developed such a relationship.

“John Powers was a very likeable man. You’d meet him and feel like you’d think you’d known him all your life,” English said. “He really contributed to the art in Colorado. He could pick up the phone and say, ‘Andy, come out and let’s do an exhibit.’”

Powers shared his love for art through myriad avenues. “He would facilitate exhibits at the Aspen Institute and was very instrumental in starting the Center for Contemporary Art in Aspen,” English noted. Additionally, Powers founded the Aspen Institute’s Asian Seminars.

The building, nestled on 60 acres of pasture at 13110 Hwy 82 – open 10 a.m. to 3 p.m. Monday through Thursday – is itself a piece of modern work by Japanese architect Hiroshi Nanamori. The almost 15,000-square-foot space first welcomes with a 5,600-square-foot reflection pool lined with black granite. A concrete frame marries density and empty space over the water to highlight a spectacular view of Mt. Sopris.

“It has such a calming effect, people tend to whisper when they come in,” English said of the architecture. “It’s all solar [and] geothermal, so it’s really state of the art.”

Inside, the Andy Warhol display dominates Gallery One on the first floor, which also features a library — lined with pottery by ceramicist Takashi Nakazato — and a media room to encourage contemplative study. Upstairs, room after room takes viewers through Jasper Johns’ works from 1960 to 1999.

“It’s a huge commitment, to establish a museum and commit to caring for a collection in perpetuity,” English said, though she emphasized that her love of the work didn’t make it feel like a job. “It’s not just having a museum and let people come to visit. You have to care for it for your grandchildren’s grandchildren.”