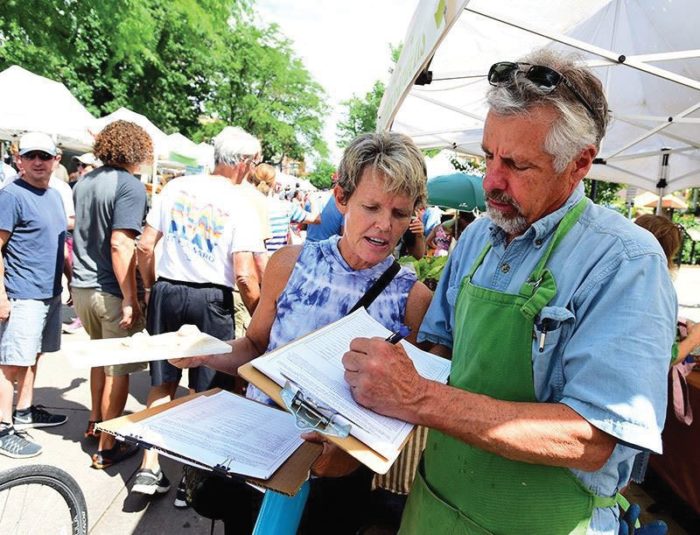 Fred Malo was taken aback when he was asked by a Mountain Fair volunteer to leave Sopris Park premises. He was collecting signatures for the Colorado Rising coalition effort, which seeks to increase the required distance between oil and gas wells and occupied buildings from the current 500 feet to 2,500 feet via Initiative 97.

“I argued with her, and she said she was going to have the police remove me. Well, I beat her to it,” Malo said. “I went to the police trailer on Euclid, and Officer Tatum answered and he said, ‘You go back in there and circulate your petition. You have every right to do so.’”

Malo returned but was again asked by another volunteer to leave, citing Mountain Fair policy that requires signature collectors for political petitions remain along the park’s perimeter so as not to interfere with fairgoers’ experiences.

The problem is, it’s a legally murky area: Sopris Park is a public space, but during a leased event, does a leasing entity have the right to curtail First Amendment rights? For instance, the Carbondale Farmers Market does not allow political activity, whether it’s renting a booth or collecting petition signatures.

“I think the issue at point is had it been normally — just a town park — they would be totally allowed to gather the signatures, but because we lease the park to Mountain Fair and we lease [the street] to the Farmers Market, it’s kind of a gray answer,” Cathy Derby, Carbondale’s town clerk, said, adding that Town Manager Jay Harrington (who was out of town at press time) has requested the Town’s legal team deliver an official ruling on the matter. That decision is expected next week.

Julia Williams, the volunteer coordinator for the Colorado Chapter of 350, an environmental grassroots movement that is part of the larger Colorado Rising coalition, emphasized that the campaign has encountered this type of pushback at other events, as well.

“I know not only at Mountain Fair but in other places like the Music in the Park in Glenwood, this has been something that a lot of people have had a difficult time figuring out, that gray area,” she said. “All over the state, it’s been a huge question about where their rights end on public property when there’s an event happening there.”

While Mountain Fair had for years held a policy that prohibited petition signatures being collected on the fairgrounds, Carbondale Arts Executive Director Amy Kimberly admitted she hadn’t intended to maintain that policy after being threatened with legal action from other groups.

“We just didn’t want the Fair to become a political battleground,” Kimberly said of the earlier policy. “We kind of gave up trying to regulate it too much because we’ve been threatened with lawsuits and stuff like that. I realize that not [all volunteers] got that message this year, so that’s why people were asked to be at the perimeters.”

That said, Kimberly expressly stated that she wished signature collecting remained outside of the park during Mountain Fair — and that’s largely because so many Carbondalians are politically active during the rest of the year, she explained.

“I think in respect to what the fair is and the hardworking people who work all year long toward some of these issues, they want a break too,” Kimberly said. “The Fair is our one break.”

So while Kimberly and many Mountain Fair organizers will continue to ask that signature collections happen along the park’s perimeters, there’s acknowledgment that that preference can’t be legally enforced. And for campaign volunteers like Malo, event spaces prove more effective than at the outskirts.

“People on the outside of the park want to get in — they don’t want to stop and sign a petition, so I had a lot more luck getting signatures insides the park than I did outside,” Malo said, estimating that he collected about 160 signatures while at Mountain Fair.

Regardless of any misunderstandings, though, Colorado Rising turned in 171,000 signatures to the Secretary of State on the Aug. 6 deadline, far more than the 98,492 required by state law to qualify for the ballot in the November election.