Mitsch Bush discusses getting things done during stop in C’dale 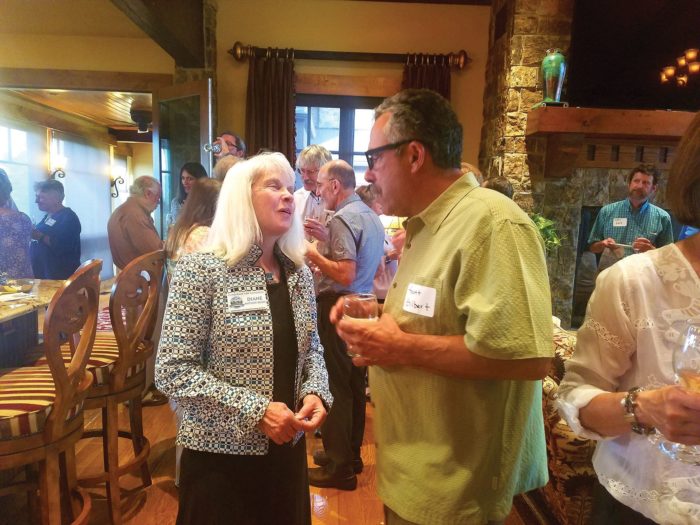 A lot can happen over a cup of coffee — even cultivating common ground between Democrats and Republicans. That has been Diane Mitsch Bush’s philosophy throughout her three-term tenure as a state representative, and it will continue to be her mentality in Washington, D.C. if she is successful in unseating Rep. Scott Tipton this November.

“When I went to the Colorado House — and this is part of my plan — I spent a lot of my time socializing across the aisle, literally walking over every morning and chatting with [them],” she said. “I would have coffee with my Republican colleagues. I saw my Democratic Caucus colleagues all the time; there wasn’t as much institutionalized opportunity to meet Republican colleagues.”

It’s proved an effective strategy: more than 75 percent of her bills have passed into law with bipartisan support, despite split chambers, according to her campaign’s website.

One such bill, which she cosponsored alongside two Republicans, Rep. Jon Becker and Sen. Jerry Sonnenberg, allowed an income tax deduction for individuals who leased an agricultural asset to a beginning farmer or rancher. Another — cosponsored with then Rep. Don Coram, a Republican — created incentives for developing hydroelectric energy systems, which would allow communities to supply local electricity.

“On one issue — say a water issue — you may have a whole set of people with whom you work on that particular bill. Then, on another bill — say preschool for all — you’ll have a very different set of members with whom you work,” Mitsch Bush said. “You’re not always working — and you shouldn’t — with the same people. You find out where other members stand, and then you work with the ones that you can find common grounds with on issues that affect [our areas].”

She’s given a lot of thought to which issues she believes will be increasingly central in the national arena.

“I think public lands and the environment are going to be critical,” she said. “This administration has taken us backwards with regard to the stewardship of public land and certainly with regards to environmental protection. Many of the people on committees literally don’t believe in science. A Republican colleague asked me in the Colorado House, ‘Well, do you believe in climate change?’ And I said, ‘It’s not a religion. It’s scientific evidence.’”

Mitsch Bush stressed that as a representative for Coloradans’ interests, that’s particularly important.

“There is a great deal of money and power given to the Republican majority that wants to sell off public lands. I am ultra-opposed to that,” she said. “I come from the Western Slope, where public lands are not only our heart and soul, but they are bread and butter. That’s where the water comes from, so that’s important.”

She also acknowledged that, in some ways, national politics will be more difficult than Colorado politics in terms of passing legislation. That’s because unlike in Colorado, where every bill must be heard and receive a vote, committees decide whether or not a bill in the national Congress will move forward to a formal hearing.

“There are some really good Democratic bills that are bottled up in committee and will never see the light of day,” Mitsch Bush said. “The basic reason [for that] currently is because pretty extreme Republicans are in leadership. One of the things about having the majority of course is you get all the chairships, the committees. I think a lot of people forget about that. It’s not just votes on the floor; the committees are where the action is. By simply not even being able to hear a bill, that really protects the incumbent Republicans because they don’t even have to vote on it.”

Mitsch Bush’s pragmatism can be felt in her campaign, too. In a recent fundraising event held at a River Valley Ranch home, about 50 supporters all concurred about the importance of mobilizing voters during a midterm election and growing an organized volunteer corps.

“Republicans have captured all of the offices to be had in the country over a 10-year period by starting at the ground level, and Diane understands that because of her experience and background in the State House and in local politics,” said Garfield County Democrats Vice Chair Andy Quiat, referencing Mitsch Bush’s time as a Routt County Commissioner. “Tell your friends to get out and vote because the data shows that if you ask someone you know to… vote, they are 8.3 percent more likely to [do so].”

Editor’s note: The Sun intends to provide equal coverage for any current candidates who hold public events in Carbondale with adequate notice.