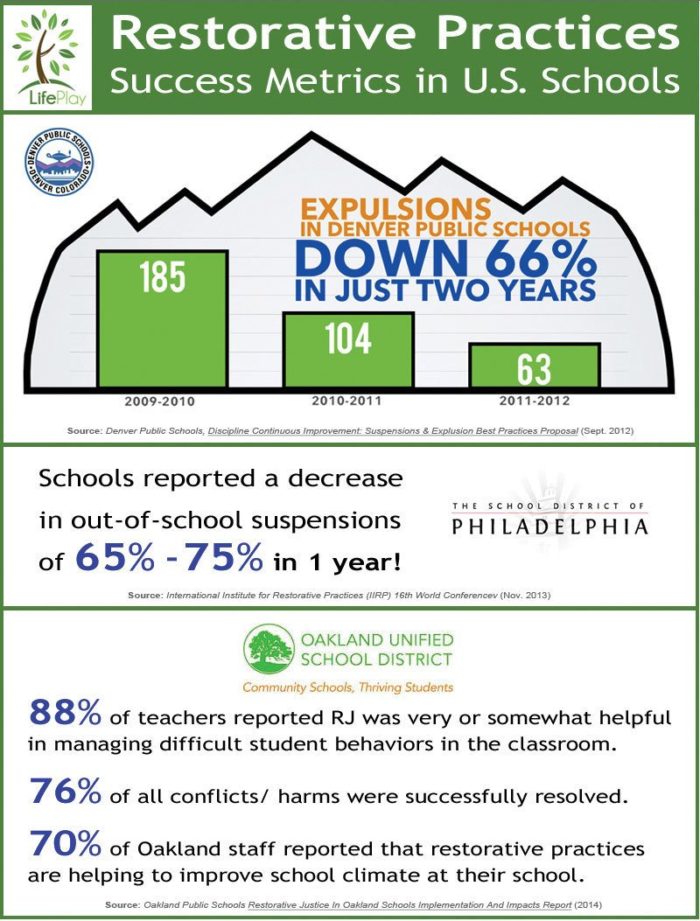 “Nobody understands me. Nobody cares about me,” is a common utterance among kids who habitually skip or are expelled from school.  With a one million dollar grant providing funding for at-risk students over the next four years, the Roaring Fork Schools are committing to a new approach to discipline and conflict resolution with the hope of dispelling that sentiment.

The grant was awarded by the Colorado Department of Education, which has been encouraging schools to shift away from traditional disciplinary practices and toward restorative practices — “processes that proactively build healthy relationships and a sense of community to prevent and address conflict and wrongdoing” (International Institute of Restorative Practices website). Lindsay Hentschel, the district’s Curricular and Professional Development Coordinator, told The Sopris Sun that the district has been gradually moving in this direction for years; the grant will enable them to make this shift complete.

Traditionally, when a student displays significant behavioral problems, they are removed from the classroom or the school. Staff members convene to determine a strategy for addressing the student’s behavior when they return to the classroom — employing incentives to encourage the desired behavior and punishments to discourage negative behavior.

The restorative approach is quite different. Rather than using “carrots and sticks” to try to regulate students’ behavior, the focus is on identifying and addressing the root causes of the problem. Rather than staff members discussing the problem amongst themselves, the process begins with talking with the student and their family: What do they think is getting in the way of the student behaving more productively?

School staff tend to make assumptions about what kids and families need, Hentschel said. Well-intentioned as they may be, they often miss the mark. For example, if a child is habitually tardy, a teacher may try offering rewards for arriving on time or administering punishments for arriving late, when what the child really needs is an alarm clock.

Oftentimes, according to advocates of restorative practices, students lack the skills to behave more productively. Helping them gain these skills is a more effective long-term solution than punishing the resulting negative behavior.

Hentschel told The Sun that in her experience, involving students’ own voices “early and often” tends to give kids a sense of agency. They come to believe that they can “make things happen,” rather than seeing themselves as victims of a system that’s stacked against them. They begin to feel like the school is “on their side, rather than something that they need to fight against.”

While the grant from the Colorado Department of Education is oriented toward the district’s 400 habitually truant students, restorative practices will be integrated throughout the schools — not only to address the problems of students skipping school, disrupting class, or failing classes, but also everyday classroom challenges.

Teachers will be trained to use “restorative circles” throughout the day for issues such as a conflict between two students or poor behavior when there’s a substitute teacher. Students will be encouraged to share their perspective about classroom challenges and work together to come up with possible solutions.

Hetschel emphasized that the restorative practices model is not about being more permissive. When implemented correctly, she said, restorative practices demands a higher level of accountability by requiring the student, and often their family, to address the root causes of the problem behavior, and to consider the impact of the student’s behavior on others.

Some of the grant funds will be used to fund a new position for the next three years: Dr. Grace Tennant was hired to integrate restorative practices throughout the district and develop a digital case management system for at-risk students. She’ll be collaborating with school staff primarily through a Responsive Services Team (RST) at each school, including the school counselor, assistant principal, and any teachers who choose to opt in. Tennant taught in the Roaring Fork Schools for thirteen years before getting her PhD in Educational Leadership and Policy Studies.

While Tennant and each school’s RST will carry most of the responsibility for the shift, all teachers will undergo training in this model so that they can incorporate it into their classrooms.

Hentschel believes the shift toward responsive practices will have a huge payoff for teachers. Developing a consistent district-wide approach to behavior problems will reduce stress on teachers, and with fewer students being pulled from or skipping class, teachers won’t have to spend so much time catching up students who have been absent.

Most importantly, Hentschel noted, the shift will create a more positive working environment overall for teachers. She shared the following example to illustrate her point.

Last year a high school student asked to leave class to use the bathroom. He was gone a long time, returning to class with cup of Starbucks coffee. The teacher sent the student right to the office. Rather than automatically administering a consequence for cutting class, the assistant principal asked the student what happened. The student explained that he left class because he received a text about a family emergency. A friend noticed him in the hallway looking upset. They talked for a while, and the friend shared her coffee with him.

The assistant principal brought the student and teacher together after school to share how the experience felt for each of them and discuss possible solutions.They both realized how they could have handled the situation better: the teacher could have asked the student what was going on before jumping to conclusions; the student needed to learn the correct protocol for addressing a family emergency while in school.

What could have turned into months of tension between the student and teacher, instead resulted in a closer connection between them. Twenty minutes of the teacher’s time after school saved the teacher months of feeling frustrated and resentful.

When kids misbehave, Hentschel said, it’s hard for teachers not to take it personally. Feeling a close connection with their students instead of rifts “is energizing to teachers rather than depleting.”

That kind of impact is difficult to measure. While the district will be tracking the number of student absences, negative behavior incidences and failing grades, Hentschel believes the grant-funded project will have significant and long-lasting, yet less tangible, impacts as well:  enhancing teacher-student relationships, kids’ sense of belonging and feeling cared for, their ability to consider the consequences of their actions on others and to understand others’ points of view, as well as kids’ sense of themselves as individuals whose voice matters and who can make positive changes in their own life.