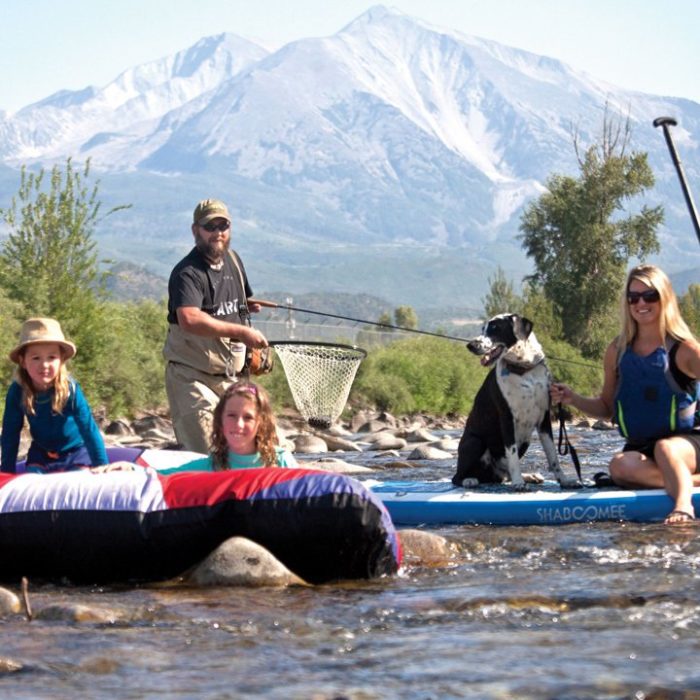 It’s one thing to hear that the lower Crystal River is running at less than 5 percent of its seasonal mean and quite another to stand in less than 10 cubic feet per second. The Sun invited Jaime Fiske of SUP Marble, Collin Szewczyk of the local Trout Unlimited chapter and youngsters Leon and Magnolia Marchand and their dog, Henry to see for themselves how dire the situation is.

Not only would tubers, stand-up paddleboarders and their ilk find themselves high and dry if they tried to float through town (otherwise the kids would certainly be wearing lifevests), but fish and other aquatic life are struggling just to stay alive (thus the lack of a hook on Szewczyk’s line).

A voluntary afternoon fishing ban is in place for sections of the lower Crystal and Roaring Fork rivers, among others.

“When those flows drop, you reduce habitat space, and warm waters are extremely stressful for trout,” explained Liza Mitchell, Education and Outreach Coordinator for the Roaring Fork Conservancy (which is opening its new River Center at 11:30 a.m. Aug. 10). “It seems like there’s been pretty good compliance. It’s pretty cool when you have everyone in the industry working together.”

Mitchell sends out the Conservancy’s weekly streamflow report, which of late shows mostly red (meaning flows less than 55 percent of average) or only-recently-needed maroon (less than 30 percent). The one bright spot is the Fryingpan River, which is flowing at slightly above average thanks to an agreement that increases how much is released from Ruedi Reservoir, as well as the “Cameo call” on the Colorado River which has basically shut down diversions to the Eastern Slope in favor of senior water rights downstream.

The Colorado Water Conservation Board has also placed a call on the Crystal, but the junior water rights may not be enough to keep water in the river. Additionally, a recent agreement aimed at reducing agricultural diversions won’t be enacted this year.

Still, Mitchell sees efforts at conservation as a step in the right direction amid increasing aridity. She praised the Town of Carbondale’s decision to enact water restrictions on both treated and ditch systems, and encouraged individual residents to do what they can to reduce their use.

“It’s easy to become complacent, but it’s better to act than not act,” she said. “Any little thing you do shows that you’re invested in protecting our local waterways.”