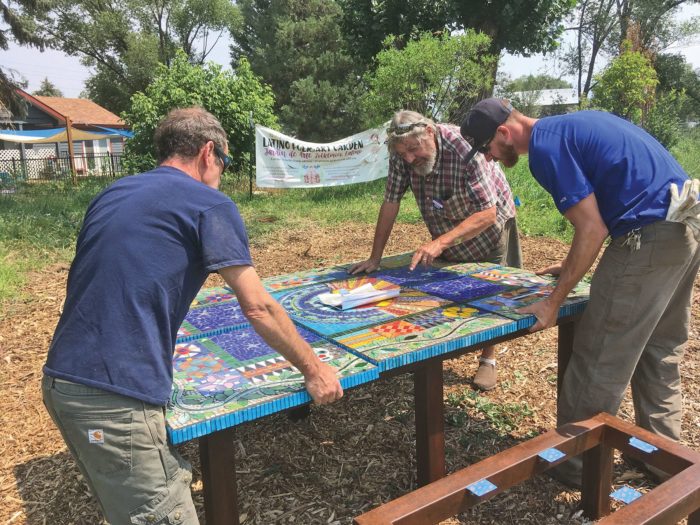 To say that the Rio Grande ARTway is a collaboration between Carbondale Arts, the Carbondale Creative District and the Roaring Fork Transportation Authority — while accurate — would be limited. In reality, the one-mile linear park has been a work in progress by more than 100 volunteers and several organizations over the last three years.

“The experience has been far richer than the terminology,” she said. “I just did not realize how powerful that experience is. Just to have people show up and really take ownership and stewardship of these places has been a really life-affirming kind of experience.”

Three spaces comprise the ARTway: DeRail Park, which will serve as the entrance at the trail’s Highway 133 intersection, the Latino Folk Art Garden on Eighth Street and the Youth Art Park behind the Recreation Center on Fourth Street.

There are 37 contributors and stakeholders listed in the preliminary ARTway master plan (tinyurl.com/ARTwaymasterplan), but it was individual volunteers that were instrumental in creating the details that have since come together to create the actual park spaces.

Most recently, a mosaic table that Kimberly described as “spectacular” was installed in the Latino Folk Art Garden on Aug. 14. Volunteers created the pieces that became the table over the course of the summer, and Kimberly attributed the number of people helping the piece’s relatively quick production.

“It really only took us June and July of a couple of days a week,” she said. “Different people would show up. On the bench, there’s the names of almost everyone who helped work on it, so it’s cool.”

Months before, the Carbondale Clay Center spearheaded a volunteer effort to create the pots now boasting plants in the garden. In addition to the project itself, CCC Executive Director Angela Bruno felt that contributing to the Latino Folk Art Garden presented a much-needed opportunity to connect with Carbondale’s Latino community.

According to Bruno, about 80 people came to the center to sculpt and later paint the finished pots. “It was way more than we thought was going to be in here, which was great because admittedly we don’t see a huge Latino population coming in here, and that’s some outreach we’re really trying to expand,” she said. “[We] really want to make this place seem welcoming to all members of the community.”

To that effect, Bruno put her money where her mouth is, as the adage goes.

“I offered a few scholarships during that time, so some of the kids that were there helping out have come back for summer camps,” she said. “It was really wonderful.”

And that  — using creative placemaking as a gateway to deepen community  — is exactly the point of the ARTway, explained Eaden Shantay, who founded True Nature Healing Arts and chairs the Tourism Council of Carbondale.

“It has this incredible potential,” Shantay said of the ARTway. “It’s been this path through this industrial area, yet now it’s becoming this path through this beautiful area that’s been beautified with creativity. It has a lot of potential to really just enhance the quality of people’s experience who use the path, but it also says a lot about who we are as a town.”

To commemorate the progress that’s been made in the ARTway parks, True Nature Healing Arts will host the kickoff a celebration Sunday, Aug. 19 from 2-5 p.m.

“We wanted to introduce people to True Nature as a part of this artistic whole movement in Carbondale,” Shantay said. “We are right on the bike path, and we’ve spent certainly a lot of time, talent and treasure just to enhance the beauty of that pathway, including planting a significant amount of trees and of course having the peace garden right on the bike path.”

From there, the afternoon is sort of a Choose Your Own Adventure, Kimberly said.

“People can walk the labyrinth and reflexology trail, and then people can just spread out,” she continued. “The Clay Center will have their Clay National show up, and people can vote for their favorite piece. At the Latino garden, we’re going to have a mariachi band and some spoken word artists. And we’ll have tamales! At DeRail Park, we will have watermelon and more spoken word and some more music.”