Blacksmithing conference shows CRMS a stronghold of the craft 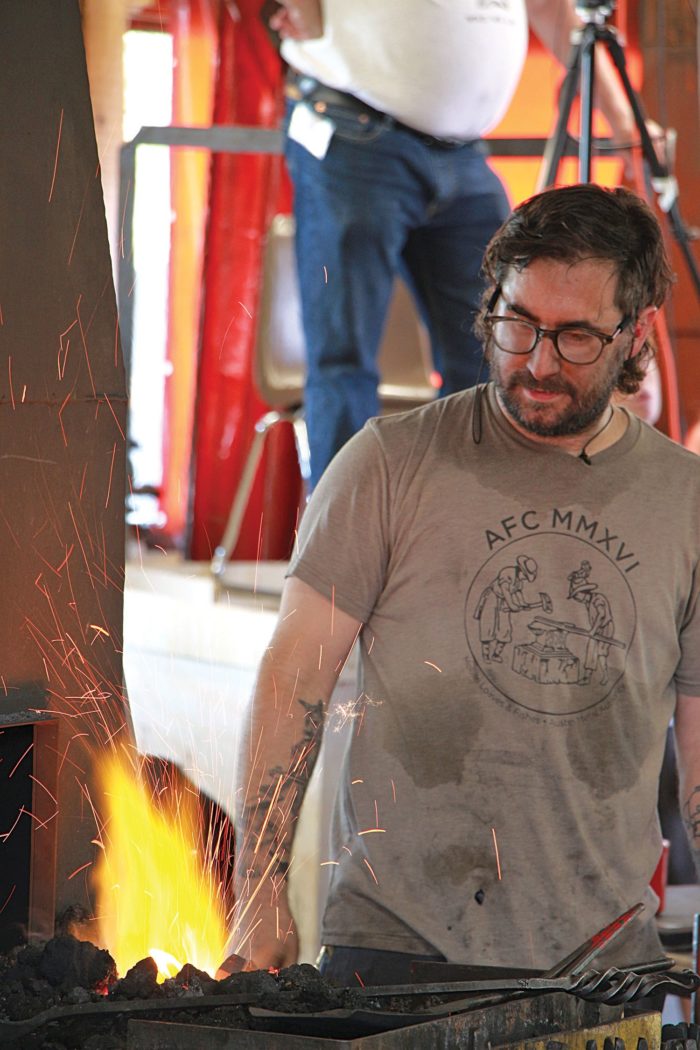 This past weekend, blacksmiths from all over the United States and Canada converged on Colorado Rocky Mountain School for the Rocky Mountain Blacksmithing Conference.

The ringing sound of a hammer being brought down upon steel in the shop kept rhythm as Scott Kretschmer and I watched the demonstration and walked through the section of campus taken over by the blacksmiths for the week. “All sorts of folks come,” said Scott, who has been part of this conference for sixteen years. He’s the president of Rocky Mountain Smiths, and the vice-president of Artist-Blacksmith’s Association of North America. “I’d say the majority are hobby smiths looking to advance their craft, but we have a number of experienced blacksmiths here as well, from all over the U.S. and Canada.”

The conference kicked off Thursday evening with a fun competition. This year, thirty-four participants competed to see who could smith the most aesthetic right angle in twenty minutes.

“It would be easy to cut two pieces of steel at a forty-five degree angle and weld them into a right angle, but blacksmithing this is incredibly hard. You’re pounding on the steel, and by nature one side wants to slump in and the other push out. And we gave them round steel as well, which makes it even more difficult.” The conference turns collaborative from there, as the group project is introduced, an initiative started a number of years ago which challenges small teams to collaborate and craft art together. This year, the group project is to smith the antique hearth ware of a trammel and trivet.

It became clear over my short tour with Scott just how complicated and nuanced the craft of blacksmithing is. At one point we stepped into a twenty foot long closet, lined with different molds and shapes of hammers and steel. Scott proceeded to describe one after the other to me. I asked him to distill blacksmithing down a little bit. “I’d say that precision play is a great way to describe it.”

We turned back to the demonstration, the source of the rhythmic pinging. “That’s the striker, the person bringing the hammer down each time upon the other hammer that rests on the iron. They need to hit the head of the hammer each time right on the top at just the right angle with just the right force, otherwise the hammers skid off and it’s messed up. And that doesn’t even get into what the other hammer is doing or how it’s used, the heat, the material.”

“Hosting this at CRMS is the perfect fit,” he continued. “Everyone is immersed in their craft for the whole conference, working late into the night during open shop time or relaxing after dinner. This conference is half about the community. We have the place to ourselves, we have accommodations, and nowhere can beat the food. We all get to play and learn for four days.”

In exchange, Scott and a few other blacksmiths arrive at CRMS a few days early and do some annual maintenance on the shop and its tools. The shop was donated to the school by Francis Whitaker in the late 1980’s, a renown blacksmith who had had his shop in Aspen. “Whitaker had a massive impact around here. His mentorship is why there are a lot of blacksmithing shops in this valley now.” Part of their maintenance this year included finding and preserving some of the blacksmithing hammers that Whitaker himself made.

Members pay a fee to watch the demonstrations and participate in the conference, but the public can join in on the silent auction of art that some smiths bring with them, and of whatever is produced during the conference. Look for that event next year, and until then, keep an eye out for the subtle hammer marks or stout ironwork that denote another aspect of the Roaring Fork Valley’s historical and current cultural heritage.