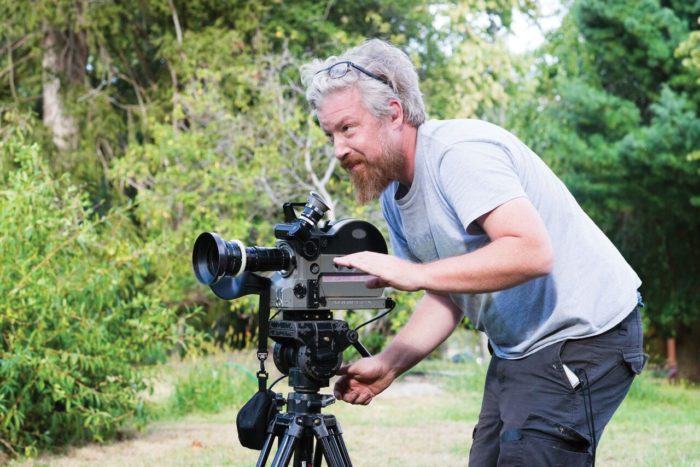 When Clark Heckert finished the manuscript for “Sudden Storm” in 1991, his son, J. Winfield, was a teen just experimenting with film to tell tales of piracy during a family trip to Lake Powell. Now, Clark’s book is officially available in its final form and Winfield’s first feature length film —  “In the House of Madness” — is slated to screen at the Crystal Theatre. Pamela, Winfield’s mother and Clark’s muse, is working on a book of her own, focused on a boarding school in New Jersey which she and several generations before her attended.

“As a family, we have great imagination,” Clark said.

Winfield got his passion for film from the grandfather he was named after — a chemist who used to develop Super 16 in the bathtub. He also remembers being read snippets of his dad’s thriller as a child.

The book is dedicated to Clark’s brother, John, who died on Capitol Peak in 1957. Its decades in limbo were mostly due to the lack of anyone willing to print an unknown author.

“I could not find a committed publisher, and I just left it on the shelf,” Clark said.

But when he showed it to local historian Charlotte Graham, she urged him to self publish it, and local publishing company Light of the Moon Inc. made it a reality. It’s now available on-demand through Amazon.

“Sudden Storm” is set right here at the end of the Cold War, and chronicles competing weather engineering efforts by the Soviets and local heros. It comes complete with a race around Lead King Basin and a standoff at the Marble quarry.

“Any place I’ve been, anything I’ve experienced I threw in,” Clark explained. “It’s written to be entertainment. I tie it up in such a way that you can’t be sure it didn’t happen.”

Similarly, Winfield cast some of his friends and put neighbors to work filming “House of Madness” near his own home base of Wilmington, Delaware. Inspired by watching “Moonrise Kingdom” at the Crystal Theatre, he used Super 16 film and an ‘80s setting, but a style more reminiscent of Sam Raimi than Wes Anderson.

Exploitation and horror have characterized his short films throughout his film education and career, which he supplements financially by shooting weddings and the like. The genre-characteristic tight budget came together thanks to Winfield’s willingness to wear many hats, a trade for writing and creative special effects — including actually driving a 1981 Mercedes off a cliff. Like his dad, he’s out to entertain without taking himself too seriously. The protagonist — a college student home to deal with the estate of her mysteriously deceased parents — is up against a projectionist hitman, among other forces.

It’s not a film he could have made when he was first starting out.

“As technology improves and you learn more, it becomes doable,” he explained.

Still, he had to take it scene by scene and effect by effect to get it done — something Clark can sympathize with.

“You know where it starts and you know where it ends, but it’s one scene at a time,” he said. “It’s like learning to ski — the only turn that really matters is the next one.”

“It costs me nothing to come up with an expensive plot,” he said. “You’d need a few million dollars just to produce it.”

Whether Winfield will ever attempt to adapt his father’s book remains to be seen. For now, he’s content to show off “House of Madness” while Clark sets to work on the outline for a “Sudden Storm” sequel.

‘Sudden Storm’
What: “A fast-paced novel… of conspiracies, deadly secrets, as well as love and friendship in the midst of survival.”
Where: tinyurl.com/suddenstormheckert
Cost: $24