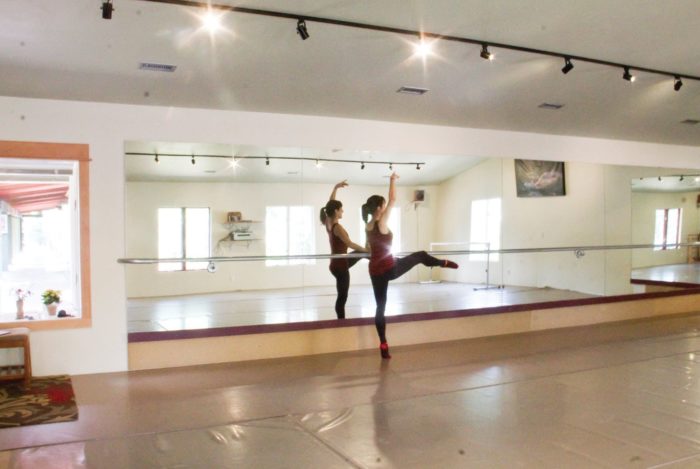 If home is where the heart is, then the new Coredination studio location at 1101 Village Rd. is where Alexandra and Anthony Jerkunica are keeping theirs. The husband-and-wife duo co-founded Coredination — which houses Bonedale Ballet — in 2004, but they’re just now settling into a permanent location all their own.

“We went to Third Street Center, and then we went to Bridges,” Alexandra said of their earlier Carbondale addresses. “Then our lease was up at Bridges, and it was time to make a choice: Where do we go from here? Do we downsize; do we expand?”

Coredination was one of several tenants that faced a hurried exit from Bridges High School earlier this summer, when the Roaring Fork School District’s construction on the building made remaining impossible. The circumstances pushed the Jerkunicas to grow beyond what they’d done — something with which, as former professional dancers and current teachers, they were familiar.

“It was really a big leap of trust and faith,” Alexandra said.

They stuck the landing. The studio has a sprung floor that ensures dancer safety with enough room for mobile barres and Pilates equipment to accommodate the myriad movement modalities offered at Coredination. And without the renovation restrictions that often come with renting a space, the Jerkunicas are able to create the homebase they’ve always wanted for their students.

“We could come in and fix it up the way we wanted it, and then we have more freedom to do the programs we really want,” Anthony said. “It’s going to be more of a contained, intimate setting, so it will precipitate more attention on what we do. Now, I think it will be a learning environment. It’s all positive.”

To celebrate, the Jerkunicas are extending an invitation to the community to their grand opening. Their hope is that people will recognize the studio as a welcoming one, for people with all ability levels, interests and experiences.

“I think what we’re trying to recreate is the surrogate family we found through dance for others,” Anthony said. “And that’s really about welcoming all comers. It’s about seeing that root of their passions and helping them grow.”

In order to cultivate that kind of sense of family, the Jerkunicas focus their shared philosophy on marrying technique and joy through physical expression.

“It’s about what you can do to use your body as a tool of expression, and I think that’s just one of the best gifts we have as humans,” Anthony said. “It’s about alignment, but it’s about providing a welcoming environment.”

Coredination is truly a movement studio, with class offerings ranging from Pilates to yoga to ballet and tap to flashmob.

“It’s fun and it makes me smile,” Alexandra said of the flashmobs. That idea came from Jeannine Stickle, who approached Coredination about organizing a Thrill the World during her tenure as Carbondale’s librarian.

Now, they are gearing up for the town’s fourth Thrill the World. “We schedule all these flashmobs throughout the month of October so we are so ready for it,” Alexandra continued.

The Jerkunicas agreed that flashmobs shouldn’t limited to October nor Michael Jackson.

“There was this resounding kind of question: Why don’t we turn this into a class and make it an ongoing thing?” Anthony said. “It gives ladies an opportunity to tap into their own quiet dance dreams.” Though the current year-round flash mobbers predominately identify as women, anyone is welcome.

In addition to their grand opening and Thrill the World, the Jerkunicas are also in the planning stages for Bondedale Ballet’s winter dance. They’re still working out the details, but their choreography ideas will balance fun and seriousness between the younger and more advanced students.

“That’s our goal, is to bring some humor and some excitement and some entertainment for all ages and really be able to highlight and demonstrate the beautiful crafts of ballet and tap and all of these dance forms that bring a lot of joy,” Alexandra said.