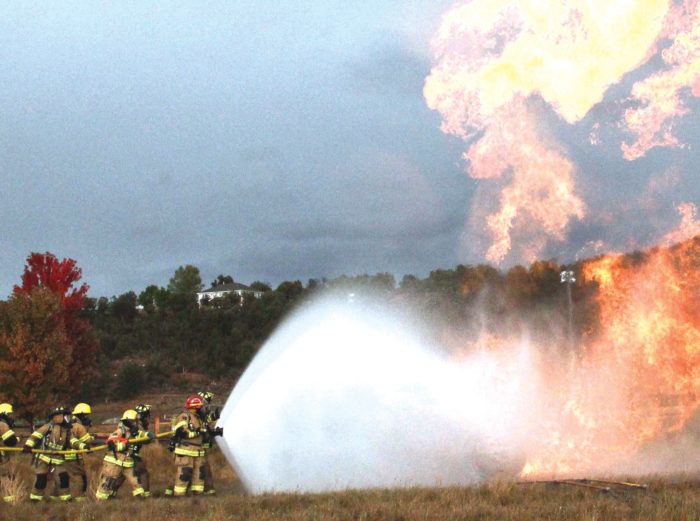 The Carbondale and Rural Fire Protection District Board is expected to certify a pair of ballot items at its next meeting in an effort to secure sustainable funding.

Voters would be asked, separately, to support a roughly $7.5 million bond issue and an indefinite 10.4 mill levy rate.

“We know this is where we need to be,” said Board President Gene Schilling. “We’re way behind because of all the lean years.”

The District’s property tax income — which fuels the majority of its budget — has been at the mercy of several short-term increases since 2013, when a request to permanently raise the 5.9 mill base rate that had been in place since 1996 failed.

Currently, a 1.75 mill increase is in effect until 2020, bringing the total rate to roughly 7.65 mills. The new proposal would supersede that, with a fixed rate from 2019 on. If both measures passed, the owner of a $600,000 residential property could expect to pay roughly $13 more per month in 2019 taxes compared to 2018 — although the effects of the bond would be offset in 2024 by the expiration of the last 20-year bond the district issued.

While a particularly fierce summer fire season has emphasized the need, Fire Chief Rob Goodwin said that the move has been in the works for a while.

“I don’t think I’ve ever seen as great a support for fire service as we have now, but that’s not why we’re doing it,” he asserted. “It’s something the board and I have been talking about for more than a year. Virtually everything we’re doing comes out of our Master Plan.”

Specifically, Goodwin hopes the extra funds would allow the department to eventually maintain six staffers around the clock — the ideal number to run two simultaneous ambulance calls or tackle a house fire while the rest of the cavalry comes.

Currently, the station usually has four employees on duty, with volunteers and others backing them up. Even that can be hard to maintain, however, without reliable funding.

“How can you plan for the future when you only have two or three years?” Goodwin queried.

Even if voters are willing to approve an increase without an expiration date — which may have been the sticking point in the 2013 request — there are other unknowns. Property tax incomes are based on assessments, which fluctuate with the economy. According to Schilling, the great recession cost the District around $1.2 million, with the budget still well below 2009 rates. There’s also the matter of the Gallagher Amendment and TABOR, two Colorado laws that combine to automatically reduce some sources of funding for special districts while requiring a vote to increase it again (for CMC President Carrie Hauser’s perspective on the subject, see page 13).

Goodwin hopes that the new rates would allow the District to put aside money for capital improvements — meaning that the next bond could be the last. Immediate needs, however, include facility upgrades (of the six fire stations across Carbondale Fire’s 323-square-mile district, Marble and Spring Valley are the most in need of repair and expansion) and new equipment — particularly vehicles.

“We have an aging fleet and it needs to be upgraded so our responders can respond safely,” Goodwin said. “The duty these things get is incredible. We’re spending a ton of money just keeping them in service.”

Indeed, one brush truck was out for service when the Lake Christine Fire started. Typically, trucks are replaced after about 20 years, but there’s a 34-year-old engine in the main fleet and the two wildland trucks the District runs cooperatively with the State Forest Service date from the ‘70s.

The board will discuss the issue at 5:30 p.m. Monday, Aug. 27 at its headquarters across from the firehouse at 300 Meadowood Dr. If approved, the ballot items would go to voters alongside a definite tax request by RFTA and potentially others in November.