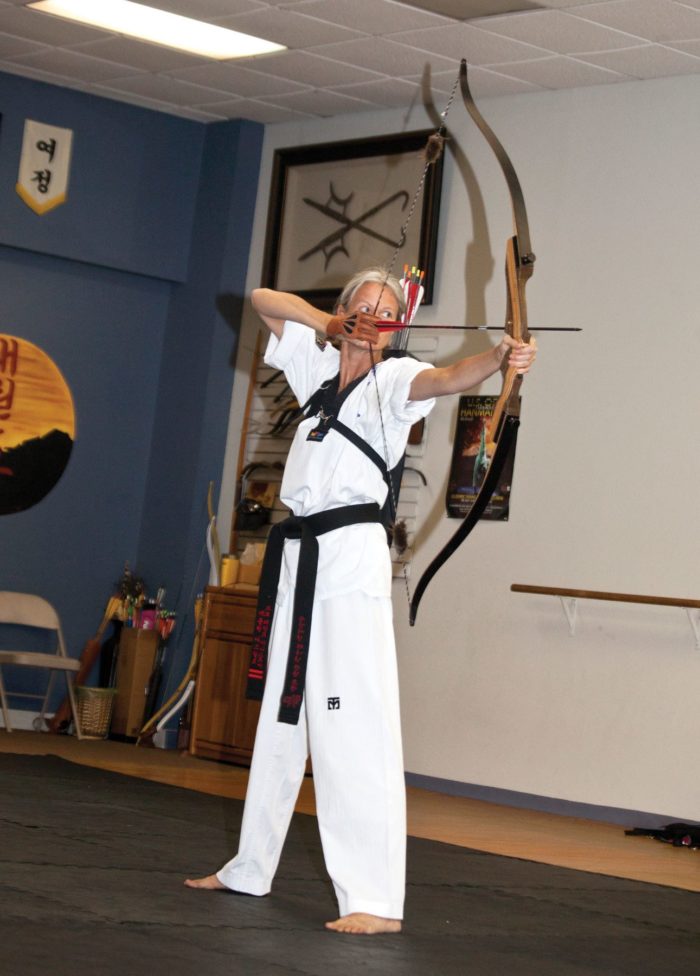 “One of my black belts came in and said, ‘I’ve got a vision for how to remodel this,’” Grandmaster and PRO TKD founder Doug Fuechsel said of the dojang. “In that back room, we have four panels that just pop up, and we stick archery targets up, and boom: in five minutes, we’ve got an archery range. Then we take it down, and in five minutes, we’re back.”

Fuechsel’s expertise is in taekwondo, which translates to “the way of the foot and hand.” Archery is not a typical component of a taekwondo practice. His students also study swords.

“My dad knew a guy that he did business with, and he was a collegiate fencer,” he said. “In high school, the senior English teacher, he was a fencer. The whole sword thing, I took what I learned for what we’re doing with taekwondo and made a whole TKD sword system.”

Fuechsel continues to broaden the scope for the art beyond what one would see in the Olympics. Not that he’s unfamiliar with that arena — he served as team captain at the Olympic Training Center in Colorado Springs and was an Olympic spokesperson for the 1986, 1988 and 1992 games.

“Those were exciting times,” he mused. “After ‘88, I ended up staying through the ‘92 Olympics then I moved here. I started out in Aspen Snowmass, then I moved down the valley. For 12 years, we’ve been in this facility. We put out some great people, black belts and families.”

The number of black belts in the studio recently increased. On Aug. 13, students spent class time reflecting on their journeys — which included two- and eight-hour meditations and a hike near Capitol Peak. Some siblings and even parents took on the challenge together.

Oswald, 50, joined her son Gus,14, and daughter Emily, 12, on their second-degree black-belt endeavors.

“I was fortunate to go up with my kids on the test and to experience what they experienced on the mountains,” said Oswald, an accomplished archerer, swordswoman and second-degree blackbelt. “And there’s no replacing doing that with them, just sharing that. We still talk about it.”

Matthew Kennedy is still a green belt, but he watched with pride as his daughter Aberdeen, 10, led class for the first time as a black belt.

“Work doesn’t let me do it as quickly as she progressed, but I’ll stick with it and hopefully get my black belt next summer,” he said. “We would drive to the grocery store, and she asked me — for three months — every time, she would ask, ‘Can we go check that out?’ She wanted to do it and wanted to keep doing it; it was just my responsibility to bring her.”

Fuechsel feels a responsibility, too, to the future of the art. He remembers the first time taekwondo became an Olympic sport; he helped international champion Sloane Cameron break glass ceilings as effectively as she breaks boards when he worked on her behalf to lobby for a women’s division in the World Taekwondo Hanmadang; now, he wants to see taekwondo become an avenue for scholarships.

“The thing we started this year was 529 scholarship prize money,” Fuechsel said. “All of our students, as they’re winning, now they’re getting money — and they can put it toward grade school, middle school, high school, college tuition. We’re stair-stepping this in and hopefully — I’m going to ESPN Wide World of Sports on Oct. 25 to confirm — [ESPN] will come to the U.S. Open because we are going to give away a quarter of a million dollars. No one’s ever done anything like that, and it can only be used for education.”