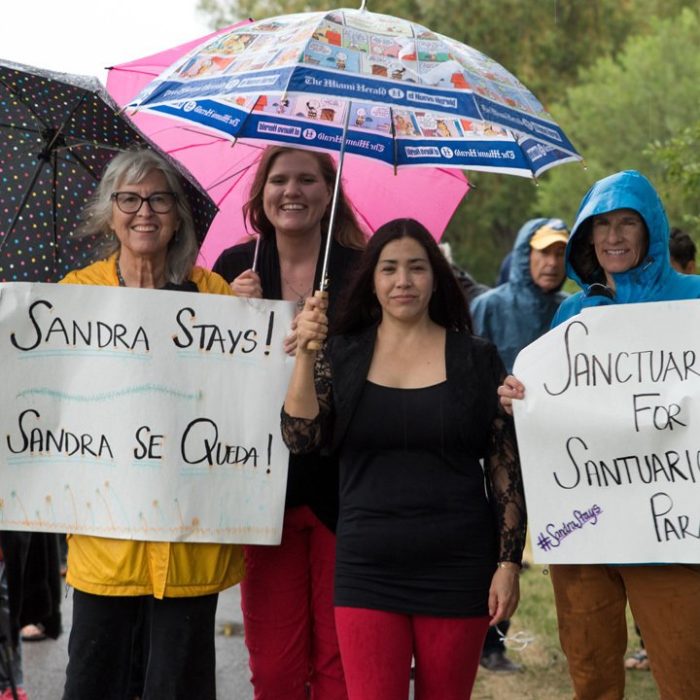 For the first time in 10 months and two days, Sandra Lopez left the Two Rivers Unitarian Universalist parsonage, where she had been living in sanctuary with her youngest daughter Areli, a U.S. citizen.

“I [was] counting every second!” she said.

Thanks to a Supreme Court decision, U.S. Immigration and Customs Enforcement (ICE) has communicated with Lopez’s attorneys that she is no longer a priority for deportation, TRUU Reverend Shawna Foster explained.

“[The] Supreme Court decision… says if your paperwork isn’t dated and you’ve been living in the United States continuously for the last 10 years, then your deportation order should be canceled,” she said. “I’m not a lawyer, so really all we know is that…. ICE told her lawyers that she’s not a priority for deportation. It’s a difference from, ‘Come to our office because we’re going to deport you’ to ‘You’re not a priority.’”

Despite the light rain, a crowd of about 30 people came to cheer Lopez’s freedom at 5:30 Tuesday evening at the parsonage. They joined her in a march through Carbondale to the Third Street Center, which houses TRUU.

“I think it’s really beautiful that the first place she’s going to go when she leaves sanctuary is straight to the church and to be with the community, so that’s really nice,” Foster said.

But even before the rally, Lopez was already dreaming of where to go next.

Lopez, a mother of three U.S.-born children, was arrested in 2010 when one of her children dialed 911 during a dispute with her husband. Though those charges were immediately dropped, per the law at the time, Lopez was reported to ICE as a suspected undocumented immigrant (Gov. John Hickenlooper signed a repeal of SB-90, known as the “Show Me Your Papers” law, in 2013).

While the energy was palpable and the mood bright during an interview preceding the Aug. 21 celebration, earlier conversations with Lopez when her future was less clear reflected the anxiety she felt.

“[There] is a lot of fear in the community,” she said in a July 10 interview. “If I had to go run to supposedly another safe place, what happens if ICE is over there? What happens to me? I go to jail for weeks or months, I don’t know. It’s very unfair, this system, for immigrants, especially in this administration. Don’t separate me from my children. That’s all I want: don’t separate me from my children.”

At least for Lopez, that no longer appears to be an imminent risk. She’s finally returned to her home in Silt with the rest of her family.