A unique ecosystem endures on the slopes of Basalt Mountain 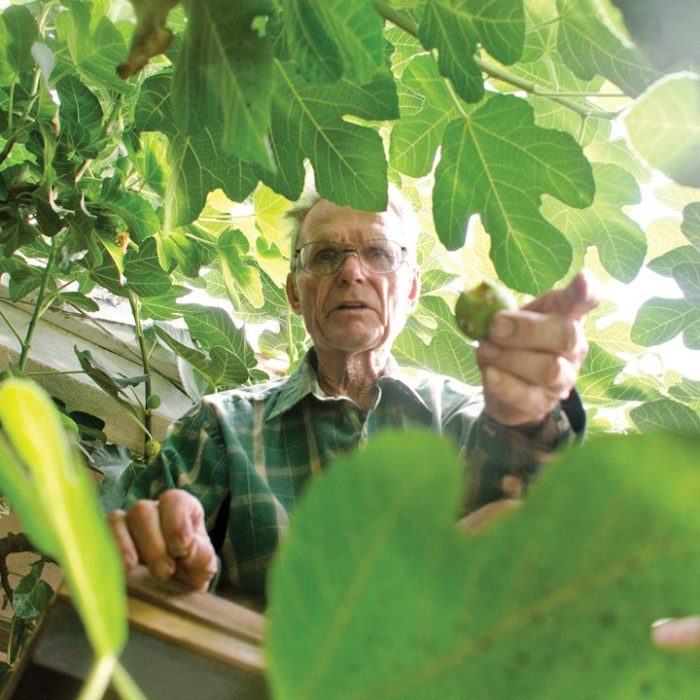 The folks at Central Rocky Mountain Permaculture Institute (CRMPI) like to compare Jerome Osentowski to a pioneer species — a hearty organism that establishes the first foothold in an inhospitable landscape and paves the way for future abundance.

Since the 1970s, Osentowski has been doing just that in a secluded valley just outside of Basalt. Specifically selected for its microclimate — the heat retention of Basalt Mountain and the lack of strong winds renders the area warmer than Carbondale — the 8-acre property supports grape vines and pear trees outside in the open. The greenhouses, meanwhile, host dates, dragonfruit and all manner of exotic plants most of us have never heard of. Some are grown from seed, others grafted. One basil plant was simply propagated from the produce section of the grocery store.

Even within familiar crops there’re often several varieties, including local heirlooms like the Obermeyer Apple, gleaned as part of the heritage tree project, as well as several accidental hybrids.

The dizzying variety is intentional. Coupled with efforts to extend the growing season, it makes it possible to have cherries three months out of the year and live food right up through November.

And if one crop fails, it’s no big deal — in fact, Osentowski seems to see it as an opportunity to try something new.

“You can always change socks in the middle of the game,” he said.

It took some time to figure out how to get the passionfruit to pollinate, and some trees take years to bear fruit. But many species also have multiple uses: food, medicine, pest control or, if all else fails, compost.

The permaculture philosophy isn’t about strict control. They try to stay ahead of the bears for harvest, but some fruits are there mostly to distract the birds — part of “a pact with the animals.” In these forest gardens, everything intertwines in casual abundance, with the essential ingredients of life cascading through the system.

“We’re not doing anything new,” Osentowski observed. “We’re just taking what nature does and adding a twist or two.”

The inorganic elements of the farm are similarly woven in. In addition to a variety of heatsink technologies to regulate temperature, one of the greenhouses features a sauna which warms people and plants alike.

“We try to integrate things rather than segregate them,” Osentowski explained.

There’s also a water catchment system and photovoltaics on the roof and a gravity-fed drip irrigation system running from the spring. Thanks to some intentional landscaping above the gardens, the record drought is almost nonexistent there.

And when it comes time to pay the bills, that same philosophy of diversity comes into play. CRMPI sells tinctures and seedlings, charges for tours and workshops and benefits from a lot of trades and internships. There’s always interest — Osentowski is considered one of the founding fathers of permaculture and his book “The Forest Garden Greenhouse” has inspired readers to make the pilgrimage from all over the world.

But with his 77th birthday coming up, it’s about time Osentowski was working two or three days a week instead of 24/7. He’d like to travel or at least sail around Ruedi Reservoir.

To make that happen, it’s going to take some sort of transition funding and a sustainable business model with paid employees.

“It’s always been a little shoestring,” acknowledged Executive Director Callie Maron, a Valley native who has worked on the property for four years. She sees a shift in public priorities since CRMPI’s early days, and thinks it will work in their favor.

“If Jerome has made it so far with so much resistance, imagine what we can do now that people are starting to want to grow their own food or at least know where it comes from,” she said.

And while the Lake Christine fire — which came within a mile of the property and prompted evacuations throughout the neighborhood — is a stark reminder of what cultivation is up against, CRMPI is still there.