Four acres of downtown all up for sale at once 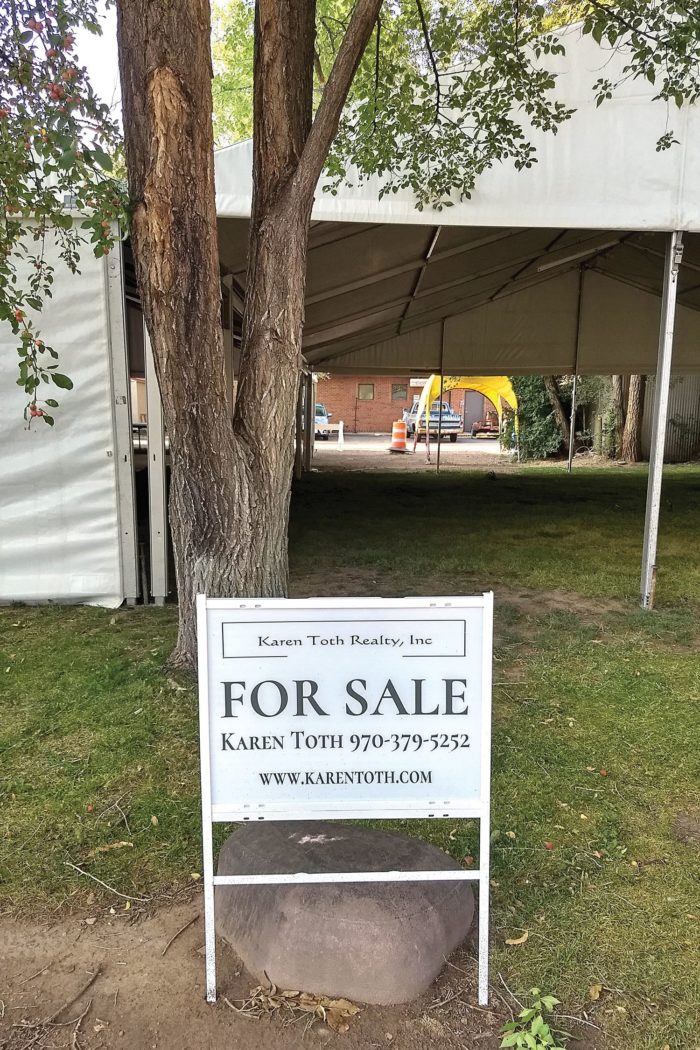 Carbondale’s historic downtown area is newly donned with several for-sale signs, but many contend that’s not necessarily a bad thing.

The six lots recently and simultaneously were added to Aspen-based realtor Karen Toth’s listings, and one is already under contract.

“Most of the people who have had interest have all been from Carbondale,” Toth said. “I’m excited… Carbondale has probably been waiting for these properties, and most of the inquiries we’ve had have been from locals.”

That is true of the 6,900-square-foot lot at 190 Main St. next to KDNK, she confirmed, though she was not able to identify the purchaser.

All of the properties are undeveloped, meaning that over the next several years, the face of downtown could change quite a bit. That’s an exciting prospect for Corey Simpson, executive director at Thunder River Theatre Company. The largest parcel for sale — a little more than 2.5 acres listed for more than $6.8 million — surrounds the theatre building.

“Back when we bought our property, there was already a plan to develop all that land around us,” Simpson said of the 2004 purchase. “I think it would be incredibly beneficial for our town to have a vibrant development that’s maybe a… mixed-use space. That’s exciting for our theatre.” Different downtown offerings would attract different potential audiences, he continued, noting that a new TRTC facility or an expansion might even be possible. “It’s also not lost on us that we are one building in the middle of an entire lot, and we own our building outright. I don’t know what that means; it would probably depend on the developer. There are things we would love to do with our building or have a new facility.”

Regardless of the dirt parking lot’s future, one thing is certain: TRTC is not at risk of losing access to its own building. “There’s a right-of-way through the property, so they have to give us access to the building,” Simpson continued, comparing the situation to the Wheeler Opera House in Aspen, which has an alleyway easement.

Fitting the pieces together

“To see some things come forward, it could be exciting for town, but it will probably take some time,” he said. “We’ve been working on the City Market plan for years, so commercial real estate does not come quickly in Colorado.”

That may be a relief in the short term, especially regarding the Fourth Street Plaza.

“We’re really fortunate we’ve been able to use it as a public space at no cost,” Harrington said. “Obviously, folks have a connection to the Fourth Street property downtown,” he continued, but added that while the Town is interested in potentially acquiring the parking area, it was never assumed that the plaza would forever remain a sort of public domain.

“Back in the mid-to-late 2000s, there was a full set of plans permitted for construction,” Harrington said.

There is, however, one area in particular that town officials hope to purchase in the future.

“The town has long had a high priority… to acquire the lot behind Town Hall,” he said, noting that the lot in question is not currently for sale. “We’ll continue to look at that and pursue that, as it’s a critical piece of our downtown puzzle. It was one of the reasons the board wanted to get the streetscape fund re-established, so we could have a fund to deal with downtown parking, and that includes land acquisition.”

The lots currently for sale, though, are fair game to private developers. In total, about 4.15 acres of downtown property will potentially command almost $11.5 million if each parcel fetches its asking price.

Randy Metz, a local attorney and agent for Equanimous Holdings, Trotwood Holdings, Pickwick Holdings and Elea Holdings — the four limited liability corporations that own the for-sale properties — declined to comment for this story.

While her name isn’t officially attached to any of them, the holdings companies that technically own the land all share a 329 Main St. address — the same address as the Melvin and Bren Simon Foundation and MSB Associates, for which Bren Simon is the Corporate Executive Officer. Simon, widow of shopping mall billionaire and Indiana Pacers co-owner Melvin Simon, is known locally for both her privacy and philanthropy. According to its 2016 990-PF tax form (the most recently available), the Melvin and Bren Simon Foundation had more than $15.7 million in assets. She’s independently made several donations to myriad organizations, as well, and town officials have consistently referred to MSB Associates as a good community partner and neighbor.

“From the Town’s side, we’ve had a really good working relationship with MBS Properties,” Harrington said.

“She’s been very generous with the Carbondale Creative District and helping us fulfill our vision,” Kimberly said. TRTC has been a specific beneficiary of that generosity, Simpson added.

As for why the properties all went on the market so suddenly, sources requesting anonymity suggested Simon is separating herself from Carbondale.

“I think she just — her heart was just broken — she felt that the town had not felt good about her, I guess,” one source said. “I think it was mainly over the [the restaurant] Town.”

Town closed its doors in October. At the time, the building at 348 Main St. belonged to Broparla Holdings, another LLC linked to Simon. It was sold to 348 Main LLC in March for $1.1 million. Metz was the grantor in that transaction, according to the Garfield County Assessor website.