Enter Sandman, karaoke host with the most 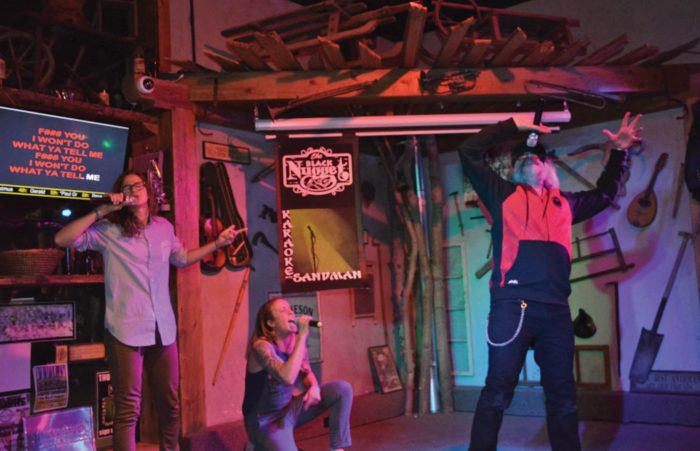 David Sandman is all over the place. His karaoke business now has weekly shows in Breckenridge, Aspen, El Jebel, Vail, Carbondale, Avon and Glenwood Springs — a different town scheduled every night.

“I’m a very, very busy person these days,” Sandman said. “For the past three years, I’ve been doing it six, if not seven days a week.”

He prefers it that way. With more than 30,000 songs in his library and decades of experience, he takes pride in the business he’s cultivated since 2005, just four years after moving to Colorado. Perhaps even more importantly, he’s just excited he can make a living through sharing his passion.

“The things is, I’ve always been a people watcher, always,” Sandman said. “This job lets me communicate with people on a level that everybody can pretty much get on board with. If you don’t know somebody and they’re singing a song, you can walk up to them and feel like you know something about them.”

That kind of communication has led to real connections between people, he continued. “I’ve had people meet at my shows, then go on to get married. It’s a social bridge that works when it should.”

For Sandman, it’s also become a bridge into the classroom. Through an educational initiative through the Vail Valley Foundation called YouthPower365, Sandman has an hour-long program during which he works with students.

“We go into the schools, teaching kids about their powers using karaoke to give them guidance,” he said. “We have the power values: perseverance, ownership, wellness, empowerment and respect.” Put together into an acronym, the values spell out the first word in the name of the program: POWER Hour.

There’s a more strictly educational angle of the program, too. Often without even realizing it, students improve their literacy through reading song lyrics in real time.

“[It] helps with their reading [and] introduces them to music a little bit and the fact that there’s meaning in it,” Sandman explained. “Teaching them how to use the mic right, which is self serving, because eventually they’re going to be my customers.”

While he said that last bit with a laugh, he wasn’t fully joking. It would be easy to think of karaoke as a frivolous pursuit, but Sandman is incredibly business minded, and he’s already working on his next growth stage.

“I’ve created a product, and I’m working on creating more software stuff that can be used by professional hosts,” he said, noting his background in computer science. Recent karaoke goers may have already used Sandman’s new tablet-based catalogues.

“I developed [it] with a student,” he said. “By July, we had this songlisting software, and I’ve been using it now for a couple of months without issue. I’m looking at offering that to the market. Now you have a book that’s always up-to-date, easy to read in the dark and doesn’t get graffitied on.”

Integrating technology into the karaoke experience has always been a cornerstone of Sandman’s competitive edge.

“Over the years, I’ve just gotten known for loyalty and that if there’s a song available in karaoke, I’ll get it for you in that moment,” he said. “I’m a technophile. I know computers inside out — always have. [Everything is] state of the art.”

He’s also fiercely committed to running a fair show in terms of wait lists and treating singers with respect.

“I run the show with consistency and fairness, because that’s something I didn’t like in other shows,” he said. “The things I have for rules for are because I want it to be a fair experience for everyone. Everyone gets the same chance: I don’t care if you’re my girlfriend or my mother or a superstar celebrity. Some people, it doesn’t make them happy, but I think they respect it. Because if I started messing with that list, I’d lose my following. They’d feel cheated.”

Much of that following can at least claim local celebrity status in the right circles. If you walk into the Black Nugget on a Thursday night, you may think you’ve walked into an audition for “The Voice” more so than a karaoke night at a local bar. Sandman thinks technology has something to do with the elevated caliber of singers he sees, too.

“Every show I have that I’ve established that works, I’m amazed,” he said. “But I think that has to do with the fact that I’ve removed and the industry itself has removed the hokey of karaoke. The generation that’s grown up with [technology] has unprecedented access to music. With the advent of iTunes, if you hear it, you possess it. All this has led to the acceptance of people expressing themselves through music — even karaoke. Once you get rid of the judgment and the apologies, listen for a second, and you’re going to hear people expressing themselves and doing it quite remarkably.”

Nights on the town

If you’re feeling a little shy under the spotlight, fret not: in addition to karaoke, the Black Nugget offers plenty of other themed evenings for entertainment:

Think the off-season nightlife is missing something? We want your feedback! tinyurl.com/BonedaleNightLifeSurvey.