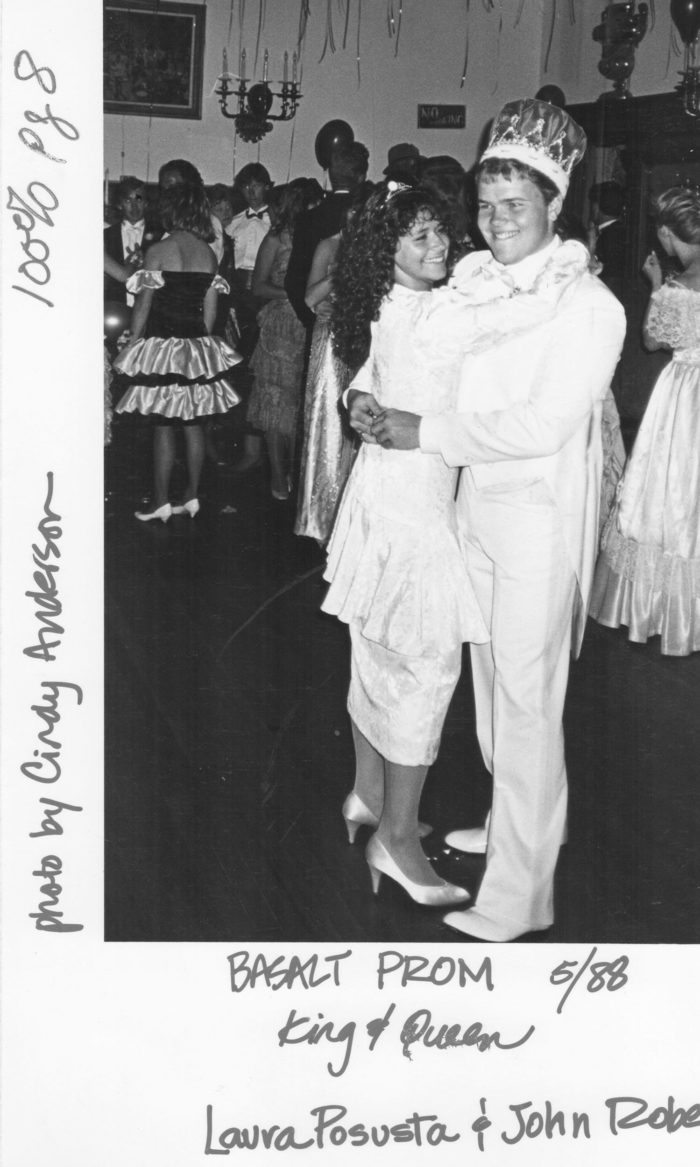 “I wasn’t sure that this was even worth doing again,” admitted Janice Duroux, one of the event’s organizers. “But it’s just fun to see everybody happy.”

Happy was an apt description for the room at the Sept. 1 reunion. Five long tables boasting bowls and trays overflowing with food stretched across one wall. Posters featuring smiling teenagers from yesteryears lined the other. Clusters of old friends filled the space in between.

Garry Dial and Joel Azoulay are such friends. They stood together near their classes’ photo collections: 1965 and 1966, respectively.

“There I am, right there. You recognize me?” Dial pointed, grinning ear to ear. The rest of his face had aged over the decades, but his eyes still shone mischievously like they did in the photograph. “Right here was one of my sweethearts all my life,” he said fondly, pointing to another picture.

He recounted his days at BHS just as fondly.

“I got to play football here. I was in every play here. I was kind of a shy kid before I came to school here,” he said. “I’m from Kansas City, big huge school.” Today, he’s back in Kansas, celebrating his third year in retirement. He came back to Colorado for the reunion.

“I haven’t seen you in a lot of years,” he said to Azoulay. “[You’re] absolutely my buddy.”

They shared stories, from how Dial “almost killed” Azoulay with his wild driving to how they both survived serving in the Vietnam War. Azoulay even recounted finding himself in a helicopter with a classmate on the other side of the planet.

“The gunner sits on the seat, higher up. And they’ve got a face mask on; you can’t see who it is,” he explained. “He said, ‘Are you from Colorado?’ I said, ‘Yeah.’ And he said, ‘Do you know where Basalt is?’ Finally, he raises his viser.”

That encounter is even more improbable when considering the class sizes at Basalt in the 1960s; they often had single-digit student bodies. It wasn’t until the Ruedi Reservoir was completed in 1968 that the town saw a bit of a population boom.

“It was a very small town back then. My folks had what used to be called the Frying Pan Inn — now it’s the Italian restaurant,” Dial said.

Change is inevitable, Jerry Gerbaz said. And it’s a good thing, he maintained.

“A place that’s popular is going to change, that’s all there is to it,” he said. “When we grew up here, there wasn’t any restaurants. Now we’ve got a whole bunch to choose from!”

His grandfather bought the ranch in what’s now known as Gerbazdale in 1897, just 10 years after the Colorado Midland Railroad came to Basalt. Jerry and his wife Judy just celebrated their 60th wedding anniversary. They originally met as teenagers at a Carbondale football game in 1955, the same year Jerry graduated from BHS.

Ed Grange, class of 1945, was the oldest alumnus at the reunion. When making the introduction, Duroux reflected on his family’s immigration story, his nearly six-decade career at Holy Cross and his stint as an entrepreneur. Grange, though, was more enthusiastic about his longest-lasting and still current love: skiing.

“One year, I did one million vertical feet!” he said proudly. Last year, because of the dearth of snow, he only got on the hill three times, he lamented. But there’s always next year. “I’ll be 91, if I get there!”

The stories went on and on. No matter the story, it seemed it was always told with a smile. And that, Duroux commented, was what made organizing the reunion worth it again and again.

“The school pulls you back,” she said. “You can feel it. And the hugs! I’ve gotten a million hugs here.”