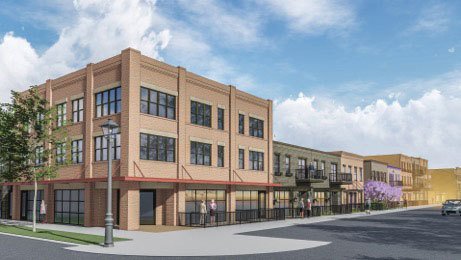 It’s been years in the making, but the plan for the Carbondale Marketplace — a 5.37-acre mixed-use project just west of the roundabout and south of the planned City Market — is finally ready for its public debut.

“The property has been controversial for almost 20 years,” said Bob Schultz, who spearheaded the planning and permitting for the project. “[There are] two things that people always seem to be ok with: grocery store, rental housing. So I feel good about it.”

Construction is already underway to extend Hendrick Drive, which will serve as one boundary for the site. The three buildings along that perimeter will all serve both commercial and residential purposes, while the remaining eight will be completely residential.

Not all 11 buildings will go up at once, Schultz noted.

“It’ll be built in little increments. They’ll build a couple of buildings, fill those up, see if people are still complaining about rentals. If they are, then you build the next one,” he said. “If there’s no demand, then you just wait.”

“I see this as a need in Garfield County,” Garfield County Commissioner Mike Samson said in a statement, recounting his 30-year career at Rifle High School. “We continually lost good teachers because they couldn’t afford housing.”

Anecdotally, Schultz commented that he, too, sees a consistent need for housing in the area.

“A lot of my friends are looking for places to live,” he said.

While not officially affordable housing supported by subsidies, the idea is to keep rent prices attainable for average residents — logistically, that means doing more with less space. Some of the two-bedroom units are less than 800 square feet. That wasn’t a problem for Andy Wisnoski of Poss Architecture + Planning.

“I think there are quite a few examples of more and more smaller… units out there, particularly when you consider some of the markets in more urban areas, where you’re seeing a need for that kind of product,’ he said. “It’s a little bit challenging, but I think quite honestly it will be well received because in our Valley, it’s not dissimilar to those markets. We all need that, I think.”

One of the key ideas behind the Carbondale Marketplace is creating not just a place to live, but an affordable neighborhood that people can call home. The buildings largely occupy the perimeter of the site, with a dedicated green space for recreation and parking claiming the center of the property. A pedestrian and bike trail will run through the site from Main Street to the new City Market.

That design was intentional, Wisnoski explained.

“When we got the opportunity to work on it — particularly being next to a larger retail area like the future City Market — we wanted to create a defensible space,” Wisnoski said. While that may sound “tough,” he continued that by having the buildings wrap around shared green space, the designers were able to create a neighborhood feel despite its proximity to the new City Market. “It just contains this really unique environment that’s still big enough that you feel part of the community. It’s not cut off; it’s connected.”

This First Friday, Sept. 7, the team behind the Carbondale Marketplace is hosting an open house for community members to check out the plans, including a monitor displaying an interactive 3D model. In keeping with the First Friday spirit, there will be drawings and prizes to keep things fun, Schultz said.

“That idea came about from Bob,” Wisnoski said. “I think Carbondale’s a unique place where we have First Fridays, and almost our entire community is standing on Main Street.”