Putting on the gloves to Power Punch Parkinson’s 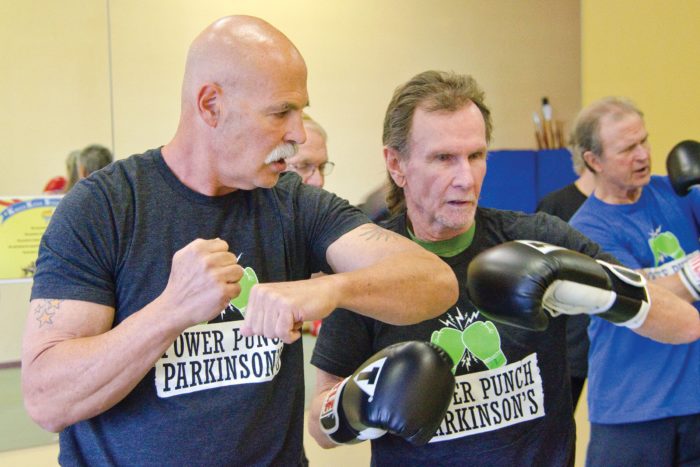 At first blush, boxing seems like an unorthodox physical therapy for Parkinson’s patients.

After all, one of the most high-profile cases of the degenerative disorder was Muhammad Ali, and many have long theorized that repeated head injuries may have been a factor. But low-impact boxing programs are popping up all over — and now there’s one in Carbondale.

Karen Bradshaw at Rising Crane Training Center (in the Red Rock Plaza at 768 Highway 133) first heard about the idea two years ago.

“A friend of mine sent me an article about how boxing was making an impact on Parkinson’s symptoms across the country,” she said. “I realized our facility was perfect to offer such a program and we started researching how to make it happen.”

Rising Crane brings a lot of things together for Bradshaw: her time teaching leadership in the corporate world, her Master’s in exercise, and her extensive background in martial arts. She’s known for (you guessed it) crane form — a philosophy of longevity and only using your strength when you really need to. That “training” part of the name is an intentional contrast to a rigid dojo dedicated to a single philosophy.

“Whatever your path is, we’ll help you on that journey,” she said. “Why force a snake to be a tiger?”

As open as she was to Parkinson’s boxing, however, she wasn’t sure whether the existing “Rock Steady” model could work financially in a small town. That’s where the  Parkinson Association of the Rockies came in. The Denver-based organization has an ongoing mission to better reach rural communities, and is sponsoring the class under the moniker “Power Punch Parkinson’s.”

As part of the deal, they wanted a professional occupational therapist on site, and Jenna Heilers just happened to walk through the door. Although she started out with a pediatric focus, she’s learned to love working with seniors (most, but not all, Parkinson’s patients are older) since her own father was diagnosed with the disease. He’s in a similar program elsewhere, and she gets new ideas every time she visits him.

Parkinson’s, she explained, comes down to issue with the neurotransmitter dopamine. While physical therapy can’t cure that, it can help with the resulting tremors by building confidence, focus, strength and fine motor skills.

“Boxing lends itself to high interval training,” Heilers explained. “A group setting helps you get to that point where you want to quit but you go a little bit further.”

And while some discussion is integrated into the program during breaks and there are plans for a support group, the participants seem to be there mainly for the workout. Thanks to volunteers, they get a lot of personal attention, and Paul Shaffer of All Valley Boxing provides some experience with the sport.

Shaffer hopes to eventually bring a youth boxing program to the area to do for others what he saw done growing up in Boston.

“I think the biggest change in my life was boxing,” he said. “It doesn’t matter what you were outside, we were all equal there.”

Working with Power Punch Parkinson’s has given him a second opportunity to appreciate what he has, and he’s enjoying working with a different demographic.

“Boxing is a dance. Punching is the easy part. I’m trying to get them to move around,” he said. “People keep coming back, so it must be good.”

Indeed, demand is such that the program has just gone from one day a week over the summer to twice weekly this fall.

“They really want to get in there and just train,” Bradshaw said. “They have so much fun. It has really become the most satisfying, rewarding, effective program I’ve ever been part of.”