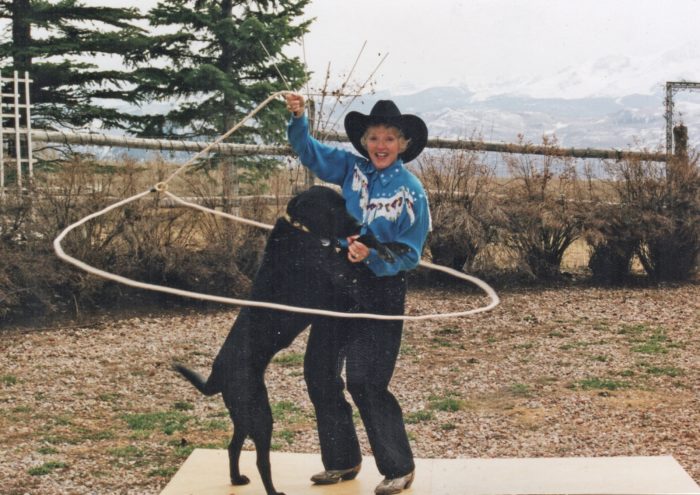 Special to The Sopris Sun

Carbondale (especially Missouri Heights) locals said “So long for now” last Saturday, Sept. 9 to Anita Witt, the brightest of stars in our universe at Missouri Heights Schoolhouse with a reception afterwards at the Pour House Restaurant in Carbondale. The Celebration of Life party of more than 200 started with a toast of her favorite cocktail – Makers Mark with a splash of 7-Up.

Anita’s life force was dynamic ‘right out of the gate’ and overflowing with the ‘loves’ and passions in her earthly life: her husband Don, who passed a number of years before, her “babies” – the dogs, her horses, a local history and pictorial book author, she was a true cowgirl performer/entertainer, a brilliant and often bawdy sense of humor, bright red vehicles, and lipsticks to match, her quiet generous philanthropy, both locally and around her Texas, then Arizona winter ranches, and … she always made time for a good whiskey (not to be confused with her trick horse of the same name).

A book honoring Anita’s life is already in the making, with a working title, “She Came from Wichita.” Instead of a traditionally-written celebration of life story, we start with the poem “Remember” she wrote, where she signed off “A.W.” In consideration of newspaper space, and also following her artistic lead, all of the remembrances below are signed off by initials rather than individual names. Never fear, everyone will be named in her book, with their full stories told amid glossy photos galore.

“What a wonderful loving person she always was. She always asked, ‘How are ya,’ Honey?’ To her, it’s not about Anita, it’s always about you. She loved everybody. The reason we formed such a close friendship initially was because of the animals. We’re both animal lovers. My Zorro and Maggie and her Spanky were brother and sister and looked so much alike. She would get such a kick out of the things that the horses and dogs would do. It would take nothing to make her laugh,  she had a such a gleeful laugh.

“One time, when they first had Sheepdog Trials at Strang Ranch, a sheepdog trainer [offered that] people could bring their dogs to see how they would do, and since ours are half border collie, we took them over. I went first with my two and they did pretty good at the herding thing. When it was Spanky’s turn, she looked at the sheep and just lay down. Anita couldn’t get Spanky to get up! One of the biggest laughs we ever had. She was a cowgirl at heart and in reality. She always had old western movies on television, playing in the background. The last time I saw her, she said, ‘I will always love you.’ She is going to be missed by a lot of people.” – J.B.

“Our connection was local history. Recently, she came up to Marble with her caregiver Colleen and we three drove around in my 1929 Ford Model A coupe [from another Missouri Heights resident Grace Cowen]. We had a great time laughing and driving all around town… she was my best friend.” – G.H.

“I remember when I was with her the first time she performed with Whiskey at Texas Scottish Rite Hospital in Dallas for terminally ill children. There was one little boy in a wheelchair with an IV and she told him, ‘Next time I come back, you can ride the horse.’ He was pretty excited when they wheeled him back in. After, the doctor came to Anita and said, ‘The next time you come, that little boy won’t be with us anymore.’ That really got to her. That day started her [years of] going to entertain terminally-ill children at hospitals all around with her ‘dog-n-pony’ show.”

“During her career, Anita performed in [cities and towns everywhere including] Las Vegas, Dallas, Chicago, and told how she used to walk down sidewalks of Nashville with her two companions — Patsy Cline  and Loretta Lynn. She was the opening act for Elvis Presley but she never told anybody. We knew her for probably 25 years before she said anything.

“One time coming back from Arizona, we were driving back in a bad snowstorm. It was the first of XM-Sirius radio, none of us had it, but she did in her shiny red Dodge truck, and she had on the Old Time Country channel. As we were coming over Red Mountain, Patsy Cline came on and Anita said, ‘I was in the studio when she recorded that.’ “ – D&D L.

“I did Anita’s hair for 28 years. My parents were having their 50th wedding anniversary and I asked her if she would write a song and she said “Absolutely!” She performed it on a cassette to give to them.” – S.P.

“Anita and that red car! All the parties, birthday parties and everything we had, running up and down the road in the 1930 red Ford that she called “Norma Jean.” We had a blast; going to Buffalo Valley, Los Desperados, and the Pour House of course. The “Thistle Sisters” had many memories in that red car.”  – L.D.

“I put shoes on her horses for maybe 20 years. She had one horse that was 37 years old out in the pasture and I shoed it all the way around, and it never moved. That was a first for me. I’d sit down and have a glass of whiskey with Anita after I got done. Not only did she have a good [singing] voice, she was a good yodeler too. We’d sit around and jam, play some songs together. She was one of my most beloved customers. I’m going to miss her.” – T.A.

“She had some fabulous one-liners. She is the one that told me that they never cry when you cut up an accordion.” – L.R.

“She was always so upbeat, no matter what she was going through at the time, she always had a smile. I was struck how devoted to her animals she was. They were such a big part of her life. She was so energetic and just full of ‘good spirits’.

“She’d come in and had her Wild Turkey and lunch or dinner with her friends and family. It was 32 years I was down there and she was always there. She is immortalized on the Pour House Cowboy Wall of Fame with her girlfriends, the “Thistle Sisters” in a picture by the fourth booth on the left. I’ll not forget Anita real soon.” – S.B.

“We moved to Missouri Heights in late ‘90s, and went to a fundraiser event at the schoolhouse. We thought we could meet people there. No one seemed interested to strike up a conversation, no one spoke to us, so, we thought ‘well … ,’ and got ready to leave. We turned the corner and there was Anita, with her big cowboy hat, and a big smile on her face, and that was it! That was the start of our friendship!” – L&M A.

“I was her sound man for a number of years and my wife was a “Thistle Sister.” When we first met, I thought Anita was a cowgirl’s cowgirl. I watched her play classical guitar by Segovia and ‘The Tennessee Waltz’! I had no idea then what a rewarding and lifelong friendship we’d both come to know. I miss her alright. I know we all do. I miss her songs. I miss her voice. I miss her guitar. I miss her smile. I miss her jokes and her wit. I miss her compassion and her courage. But I gotta tell you, whenever I see a rainbow now, I’m reminded of Anita’s love. Yeah, something about that just goes on and on.” – J. R.

“First you were my landlord, then we were friends, and next we were Thistle Sisters to the very end. You were one hell of a woman and gave us all some of the strength you had when it was needed for us in our own despair. I can’t thank you enough for being in my life. You made me a better woman, and cowgirl too.” – C.Z.

“Anita said when she got to where she was going, she’d send a rainbow.” – L.K.

I still ride my pony, up on Missouri Heights,
I try to keep away from cars and dogs,
There’s bikers and there’s runners, and traffic everywhere,
And I pick my trail around the whole barrage.

I ride up by the reservoir, and I think of Harleigh Holmes,
And how he loved to make the water flow,
And I hear children laughing in the yard at Luby School,
And I feel the quiet peace of long ago.

I ride by every homestead, and I see them standing there,
They wave and tip their hats and fade away,
And I recall their faces, and the lives that they once lived,
Those sturdy pioneers of yesterday.

Yes, I still ride my pony, all around up on the Heights,
And I see things that others just don’t see,
But now, you’ve been there with me,
And I hope you won’t forget,
Missouri Heights and all its history.