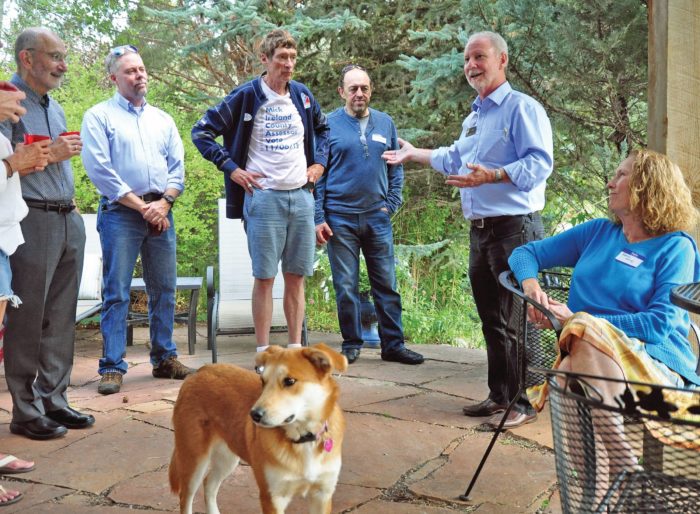 “Now, that’s the way to pin down a politician!” exclaimed Colorado Representative Dave Young at an evening meet-and-greet last week at the Smiling Goat Ranch when a ranch dog decided to stand on Young’s foot. The event was casual and friendly. The small crowd of about a dozen people didn’t seem to dampen Young’s spirit. He’s a congenial man and a good sport; he realized that maybe voters aren’t used to a campaign stop from a candidate for State Treasurer. “If everything’s going well in the Treasurer’s office, there’s not a lot of excitement there,” he said.

After seven years representing Evans, Garden City, and part of Greeley in the state house, Young, a Democrat, is running for State Treasurer against Republican businessman Brian Watson. The job is now held by Republican Walker Stapleton, who is challenging Democrat Jared Polis for the Governor’s office.

Young doesn’t have political roots. He was a middle school math teacher and education association president before he was appointed in 2011 to fill a vacancy in House District 50. “What really got me into being a state representative is my sister, who is intellectually and developmentally disabled,” he explained. “I saw that she wasn’t getting the care she needed and I figured there were others that were probably in the same boat.” So, after researching the issue, he ran for office because he didn’t believe the system was taking care of that population.

Young seems to have taken to politics like a duck to water. During the last legislative session, he was primary sponsor of 19 bills, fifteen of which were signed into law. He’s served four years on the Joint Budget Committee and chairs the House Appropriations Committee, which have given him a new perspective on the Treasurer’s office. “At the end of the day, you want to know that the taxpayer’s money is being safely, transparently, and productively invested and that’s certainly a skill set that I think I can oversee,” he said.  He’s also a Big Picture problem-solver. “I like to start at the desired outcome and work backward,” he said.

Young got more specific, during a conversation with The Sopris Sun, about some issues he’ll take on as State Treasurer.

“We’ve had an ongoing debate across the nation and in Colorado about gun safety. A small amount of PERA [state and public employee pension fund] money is actually invested in gun manufacturing equities and stock. There’s a conversation that can be had around does that reflect what the PERA membership in the state of Colorado thinks is a wise investment. The Treasurer is just one voice out of 16 on that [PERA] board. The Treasurer does not control the portfolio of PERA. But, I’m certainly going to raise a number of issues around what reflects our Colorado values.

“Can we actually invest in things that move the state forward and move PERA into solvency and reflect the values of the state? Why are we going outside the state to make these investments? If you look just at the strict numbers on return of investment, maybe you go outside the state and maybe outside the country to get a higher rate of return.

“We know when we invest in Colorado, there’s a multiplier effect as a result of that money coming back into the economy. Maybe the actual number return on the investment is a little lower, but when you factor in the multiplier effect from investing in Colorado’s economy, we actually get a better return on investment. These are pragmatic discussions about where we need to invest our money and I think people want to see it right here in Colorado.”

“The bad decision was that the administration at that time wanted to downsize government and they did it by offering people the opportunity to early retire. That threw the balance [of income and outflow] out of whack. We know that PERA can manage if we don’t make it partisan, if we work to say we want to be fully funded.

“As long as we agree that we want a sustainable, defined benefit plan for our public servants in Colorado, I think we’ll get there.  I also take a step back and say take a look at the bigger picture of “total compensation”. You can’t just look at PERA in isolation. You’ve got to look at the big picture of this.”

The transition from legislator to State Treasurer

“There’s a reason why the Treasurer’s position is an elected position. You represent people in the State of Colorado so you’re making sure you’re reflecting the real needs of the people. When I served in House District 50, my focus was narrow often because I was really representing just that core group of constituents up there. When I got on the Joint Budget Committee, I realized that we were making decisions that affected everybody in the state. And, that’s really the situation you see in the Treasurer’s office as well. You want to be sure that the people’s interest is protected.”