Boy, girl or fill in the blank… 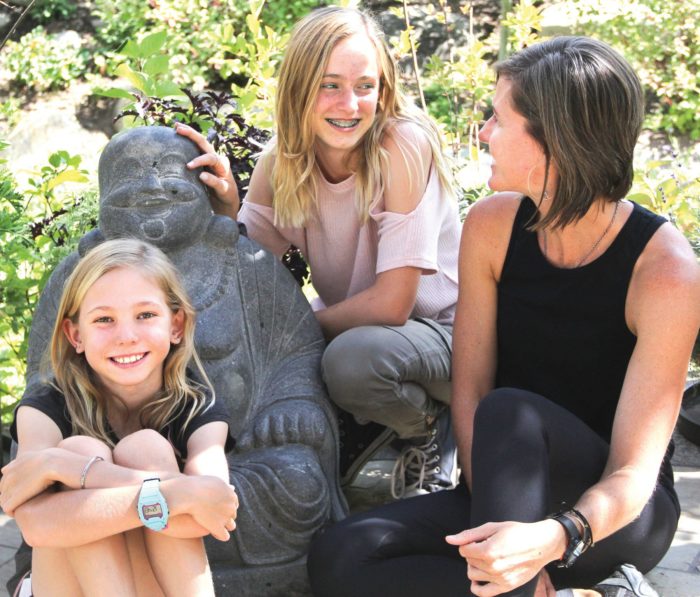 Zayna Meyer doesn’t quite remember when she realized she identified as a girl — it just sort of always seemed to be the case.

“I guess I just had a weird feeling — like at five, I think. And whenever I had a dress on, I said, ‘Call me Zayna,’” she recounted matter-of-factly.

“I remember distinctly the day that you knew. She always, from day one, dressed up in her sister’s clothes,” Shantay said about her trans daughter, to said daughter’s giggling. “And she came alive when she would put on her sister’s clothes. It was even earlier than five — it started at two, where she’d put on a dress and she’d say, ‘Call me Zayna.’”

At that, Zayna’s eyes lit up.

“Oh, I remember rollerblading in that tutu!” she exclaimed.

She felt especially free to express herself through outfits while on vacation, sporting girls bathing suits and dresses.

“Cause nobody knew me,” the now 11-year-old explained. “I think I started hiding it more as I got older… maybe going to school and all that stuff.”

She’s not hiding anymore. In the third grade, the Waldorf student officially transitioned, showing up to the first day of the school year as Zayna, not Zane.

“I remember the first day I went to school as a girl,” she recalled. “It was right after summer break. We all just went out and played at the basketball court. Nobody really talked about it.”

Nobody really talked about it, Shantay continued, because to Zayna’s classmates, it wasn’t worth talking about. That doesn’t mean it hadn’t been discussed before that first day of class. Jade Meyer, Zayna’s older sister, in particular made sure of it.

“We had a class meeting about it,” she said. “Everyone kind of made an oath to protect you, no matter what happens.”

The eighth grade had a similar class meeting with a similar decision.

“They all got together and they made an oath as a class, as well as Jade’s class, to protect her and, if anybody saw anything on the playground, to stand up for her,” Shantay said. “But it never needed to happen. Not one thing has ever happened.”

At the time, Shantay, who co-owns True Nature Healing Arts with her husband Eaden, had taken a sabbatical from teaching, which allowed her the time necessary to research transgender issues and better prepare for the inevitable questions.

“I thought the sabbatical was for me; found out it was for her,” Shantay said. “That same year that she transitioned, I started to research groups — I did so much research.”

Through her searching, Shantay found a transgender camp in California. Zayna went two years in a row.

“And I made a best friend!” she said, beaming. Rhea lives in Bozeman, Mont. But the girls will reunite Sept. 21-23 for the first-ever “This is Me” Transgender Family Camp at True Nature.

A community of allies

“We left the California camp, all of us — Jade included — were like, ‘We need this for us,’” Shantay said of the camp’s genesis. Zayna’s only feedback for the local iteration? It should involve animals.

“Well, every response from me would probably be animals,” she quipped.

So Shantay reached out to Sheryl Barto of Smiling Goat Ranch. Now, the camp will include sensory work with horses. Carbondale Arts is providing the Rosybelle Bus for silk screening shirts. The Carbondale Clay Center donated clay for sculpting.

“I don’t like throw-away art,” Shantay said. “So every piece — the pottery they’re going to make, the silkscreen shirts, they’re making dreamcatchers, they’re making diaries — everything had an intention, and it’s to support them after they leave camp.”

The “community outpour,” as Shantay described it gratefully, went beyond direct contributions to the camp. Many wanted to know how to be a better ally.

“So many people want to be allies, and they want to use the terms correctly. And frankly, there’s a lot of acronyms,” she said. “I can’t talk about all of them, because almost every day there’s a new one. This puts me in the forefront, and I’m not an expert. I’m just a mom. I just found that kids need these resources, so that’s why I stepped in.”

Jade, too, found herself facing unanswerable questions from her peers.

“I get a lot of questions — most of them I can’t answer. I just don’t know. But she’s happier,” she said, referencing her little sister.

And so Shantay decided the camp wasn’t enough. The larger community deserved to have access to some of the same resources and information she’d found in her research. That’s why on Thursday, Sept. 20, True Nature is hosting a Gender Discovery night, a free event encouraging people to explore their questions around gender. A showing of National Geographic’s “Gender Revolution” with Katie Couric will kick off the evening, then a seven-person panel will answer questions from attendees.

“I thought it was done super well,” Shantay said of the documentary. “It educated me a lot, and I thought I knew a lot. Then, we’re going to have seven people sitting on the panel, and they all have experience with gender: either being trans themselves, being a spouse of trans, being a mom, being a therapist. With all of that, there’s a lot of… lived experiences that people can ask about. There’s just so much more you can get than from reading a book.”

At the end of the day, Zayna is very much an 11-year-old child. One of the questions that comes up frequently is what she is planning to do when she gets older (presumably regarding biological changes associated with puberty).

“I kind of want to be a photographer,” she offered.

And that is one of the takeaways Shantay and her family are hoping people can walk away with from Thursday’s Gender Discovery: humans are, at their core, humans.

“There are as many intersex people as redheads. We all know a redhead. Which means we all know an intersex person, too; we just might not know. Just like there are so many people who are trans, and you don’t know. ‘This is me.’ Everybody should be able to say that statement confidently, and the truth is, not many can.”

At school, Zayna’s not even the only openly transgender student anymore. One of Jade’s schoolmates is also trans.

According to the National Geographic Gender Discussion Guide, gender diversity is not contagious — but at least according to the experiences at the Waldorf School, feeling empowered to say “this is me” can be.