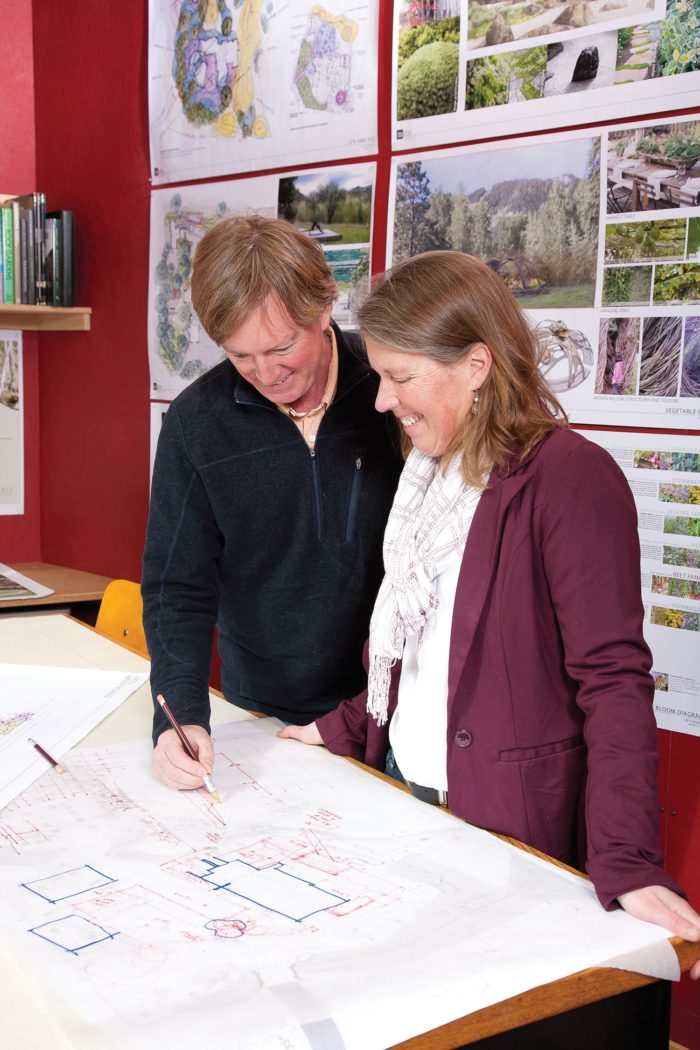 It takes a lot of work to keep the west wild, and DHM Design has long been a careful steward in that endeavor. The Carbondale office — one of four — just celebrated its 20th year in operation, and the Denver headquarters has a more-than 40-year legacy.

DHM President Laura Kirk has been part of both histories.

“I was working for them in their Denver office,” she said. “We had two young boys at the time and decided we wanted to live in a smaller community. We chose Carbondale, and DHM said, ‘Why don’t you open an office?’ We were very lucky that way.”

The “we” refers to her husband and principal at the firm, Dave Carpenter.

“It started out just the two of us,” he said. That was in 1998. Now, Kirk and Carpenter employ 14 people — plus Eddie and Stella, the office dogs.

“It’s a really diverse firm, so we do all kinds of projects,” Carpenter continued. “About half our work is public work, and half is private development.”

Carbondalians have benefitted from their projects, knowingly or not. The library? DHM. The Third Street Center renovation? DHM. And the list goes on.

“Oh, True Nature! We also worked on True Nature,” Kirk added. “That’s like the dream job. Dream client — a dream team to work with in every respect.”

But perhaps even more dear to their hearts is the work they’ve done for regional and national parks.

“I think we appreciate the public work because you’re helping make a community a better place,” Carpenter reflected.

At its core, DHM Design is all about environmental activism in its designs: creating a space that fits well into what’s already there. That’s especially true for its work with parks but applies to every undertaking.

“We’re hired to help in two regards: to help manage their resources so they’re not loved to death and also to improve the visitor experience. Those types of questions and considerations really apply to almost any kind of project that we do,” Kirk said. “The firm has a really deep history in sustainable and ecological design. I think that’s kind of a value system that runs throughout the firm, long before sustainability became kind of a hip term.”

That value system is evident to the partnering entities with which they collaborate, too. Jeanette Darnauer, whose work with Aspen Valley Land Trust led to her working with DHM Design on the Red Hill Trail project, was particularly struck by the designers’ ethics.

“When I first started working with them in the spring, we were just blown away by their value system,” she said. “They have such a passion for the outdoors and such a deep respect for landscape. The other thing that’s so impressive to me is how they marry art and science.”

AVLT is one of a long list of DHM’s collaborators. Both Kirk and Carpenter emphasized their shared belief that more perspectives present makes the work, well, better.

That’s why on Sept. 12, the Carbondale location hosted a firmwide retreat and party for staff and consultants. People from the Durango, Denver and Bozeman, Mont. offices all came to celebrate.

“You don’t do it on your own,” Kirk said. “We’re humbled and honored.”

And while the 311 Main St. office commemorated the conclusion of its second decade in town, it also marked a personal milestone for Kirk and Carpenter, who have raised two sons in town and literally left many marks on the place they call home.