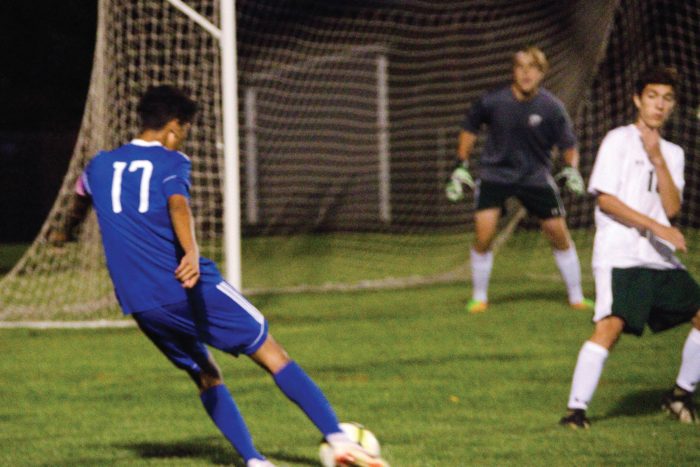 The Roaring Fork soccer boys had the clear upper hand when they hosted Colorado Rocky Mountain School on Sept. 14 — though you couldn’t tell it from the cheers.

It was a hometown game for CRMS, too, and the Oyster corner hooted and hollered throughout the 6-0 game, buoyed by numerous moments of near-triumph that never quite materialized into points. Juniors Jon Sallinen and Rowan McAlpin-Sampsel, in particular, seemed eager to prove that, while outmatched, they were not outclassed.

The Ram fans, meanwhile seemed content in the knowledge that the now 7-0-1 Rams are ranked first in the state for 3A by RPI and are climbing the coach rankings, too.

“One is based on actual results and schedule and one of them is kind of an opinion,” Coach Nick Forbes noted.

And while discrepancy might be seen as a symptom of the divide between the Western Slope and the Front Range or public and private — the two schools coaches chose over Roaring Fork were Kent Denver and Faith Christian —  RPI is the number that matters for the playoffs.

“There are three games that are hostable based on your rating,” Forbes explained. “That’s a huge advantage because we don’t travel and we get our home field with home fans. It’s great for the team and it’s great for the community.”

The Rams have also had the advantage of taking over the primetime Friday night slot with their own lines on the field. Nor can it hurt their public perception that they’ve handily won all their games against comparable schools and even tied Grand Junction — a team that went into the 5A playoffs ranked eighth last year — on their own turf.

“Right now our destiny seems to be in our own hands,” Forbes said. “They’re all very experienced and incredible athletes.”

Still, Forbes said, they’ll have to stay focused to compete against teams like Delta, and particularly the private schools that have been dominant in the postseason for more than a decade.

“They’ll be competing against great teams with a pedigree of success and the ability to recruit players,” Forbes said. “But if any public school has a chance to break this monopoly it’s this team this year.”

And while a state title is certainly on his mind, that won’t stop Forbes from scheduling at least a scrimmage to give the Oysters another crack at the Rams.

“It feels friendly,” he said. “It’s kind of a great break from the usually cutthroat season.”

And in the end, it’s not whether they win or lose…

“Success for me is knowing this team did everything they could.”