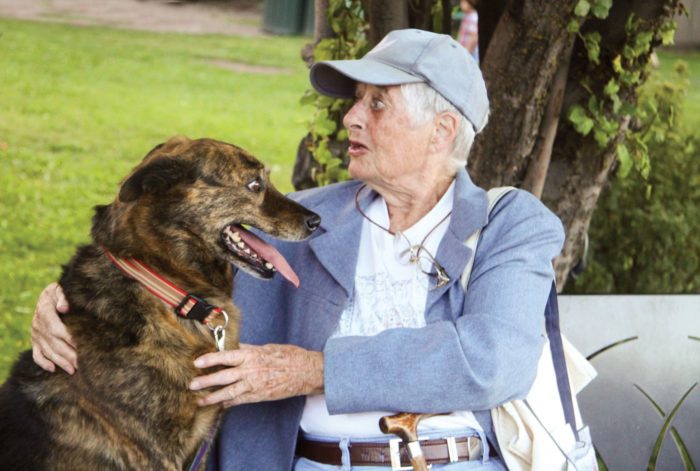 On her deathbed, Sue Bacon dictated a letter to the people of Carbondale.

“This has been a wonderful experience, you are marvelous people, and I have enjoyed my living here immensely,” she said. “We are so fortunate to have a place like Heritage Park Care Center and the loving care they give to all. To the people at Village Smithy and the Pour House you have become my favorite places. I have enjoyed my bike rides through the town. Just know you all are in my thoughts. Thank you Bobby for bringing me here and Missy for standing by me.”

Suzanne Ceabury Bacon was born in 1922 and grew up in Westport, Connecticut. She had nine kids with her first husband, Warren Reynolds, but he died in the 1960s. So, she packed up their home in New Jersey and bought an old farmhouse in Vermont. That’s where she met her second husband, Howard Bacon — no known relation.

Her ex-daughter-in-law, the aforementioned Melissa “Missy” Reynolds, used to make light of her doubly earned last name by calling her “Sue Bacon-Reynolds-Bacon” when she got out of hand.

And she did, occasionally. After Howard’s death, her kids decided she didn’t belong in the retirement community in Florida they’d used as a home base for their travels, so they moved her and Cat the cat out to Carbondale where her son, Bobby had lived for decades. She used to play pranks on her grandkids, who responded in kind. She also attended almost all of their baseball games, joined the family on Jeep rides all over the state and Sunday dinners.

In 2007, she moved into Carbondale Senior Housing, which she called “The Wrinkle Ranch.” That’s where she met the crew she would meet for Saturday morning breakfast at the Village Smithy up until the week before she failed. She was also easily recognizable riding around town in her flower-bedecked tricycle.

“She wanted a car, we didn’t think it was a good idea, so we got her the three wheel bike,” Reynolds explained.

“The first time she caught my eye was when she danced on the bar at the Hurricane Grill for what I think was her 85th birthday,” Webb explained. “She later denied that she ever did that.”

Bacon told Webb that she felt safe as soon as she moved to Carbondale, which must have helped her carefree attitude around town.

“She always had a big smile when she was riding down the street,” Webb said. “She loved animals, so she had small, medium and large milk bones in the basket.”

Over the years, though, Bacon needed more help. An eye surgery intended to correct her fading sight apparently only made things worse. Although she’d quit smoking cold turkey, she had Chronic Obstructive Pulmonary Disease (COPD) and several bouts of pneumonia threatened to take her down — but she was always back at the drum circle when Mountain Fair rolled around.

She eventually ended up in assisted living and eventually the nursing wing of Heritage Park. Webb would take her to the grocery store, take Cat to the vet, do her bills and describe the Potato Day parade for her. An avid reader and crossword puzzler, Bacon began getting her Danielle Steele fix via audiobook and Samantha Hayes stepped in to read her the newspaper every week (she was particularly fond of Cop Shop and Jeannie Perry’s column Ps&Qs).

Hayes, who also cut her hair knew her mainly through the Pour House, where she was one of the most popular patrons and the sole imbiber of White Zinfandel.

“She was such an imp,” she said. “She kept everybody on their toes. We thought she was just the bee’s knees.”

“She was always trying to spell things backwards so she could keep herself sharp,” Hayes added.

With her talking watch, she always knew if someone was late and called them on it — in a good natured way.

“She still had her spirit and her sense of humor. I felt like my mission was to entertain her and make her laugh,” Hayes said. “I would basically do a stand up comedy routine for an hour and a half.”

But at the beginning of September — not long after the death of her second child — she told Hayes not to come. Bacon was asleep when she stopped by the next day, though others got to share some parting wishes before her passing on Sept. 9.

“I think she had people that really cared about her,” Hayes said. “She was a good one. I’m sorry she’s gone, but I’m happy she’s where she is.”

Folks who knew Sue are invited to bring their photos and stories to the Pour House from 5 to 7 p.m. on Wednesday, Sept. 26.