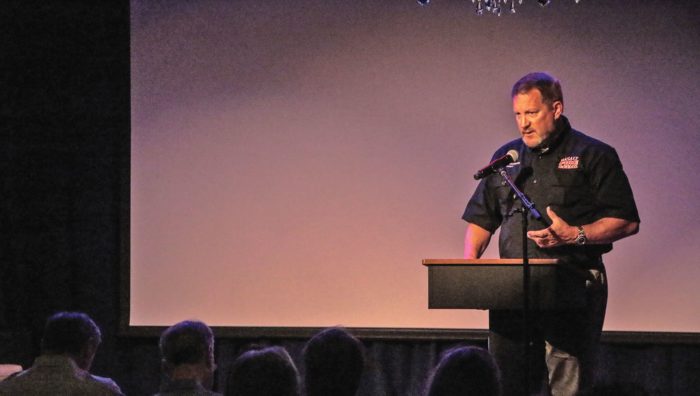 Local and regional wildfire experts gathered at The Changing Face of Wildfire forum Sept. 25 at The Temporary to reflect upon the Lake Christine Fire, and to discuss if, across the West, communities should begin to shift their perspective and be prepared for larger, devastating fires more often.

“We might have a reprieve of one year or three years, but the experts are modeling that fire seasons like this one are the new normal,” said Gary Ferguson, renown National Geographic science writer and author.

Megafires, classified as being greater than one hundred thousand acres in size, were rare occurrences in the previous century.

“Since 2000, the U.S. has had more than a dozen megafires,” Ferguson said. The Spring Creek Fire in southern Colorado joined that list. “Our western ecosystems are adapted, even sometimes dependent upon, wildfires,” Ferguson continued.

Without the decompositional moisture and rates of the Northwest or Northeastern U.S., the fire in our region does that role, burning downed and dead trees, returning their nutrients to the soil to be used again. Ponderosa trees have thick bark to protect them against understory fire and they shed their lower branches as they grow so that fire cannot use them as a ladder to get into the high canopy. Lodgepole pines produce mostly serotinous cones, which only open up and seed when they are heated by a wildfire.

However, all of these natural adaptions assume that there are the types of fires that have maintained our western forests for thousands of years: low fuel, low temperature, and low height. “We have a fuels problem, with around forty times the stocking rate of wildfires fuels, through downed trees or beetle kill stands, than we did in Colorado 150 years ago”, said Scott Fitzwilliams, White River National Forest Supervisor. “And regardless of what you attribute climate change to, all the experts and the models are showing that we live in hotter, drier times, which will drive wildfires. It was tragic and terrifying, but the Lake Christine Fire was not a random, unpredictable event. The cause was a mistake, avoidable, but the event itself was not random.”

A devastating side-effect of this new era of hot fire is the sterilization of the soil. After a low temperature fire, aspens, lodgepole, and understory growth immediately begin growing again. The high temperature, raging fires of today burn the plant matter and the soil to such a crisp that nothing will take root for some time, and water cannot permeate the surface of the soil. The once-welcomed rain sits on top of the soil and runs off, magnifying the wreckage by causing a mudslide.

This fire season isn’t over yet, despite being into the fall: one of the planned speakers, Alison Richards of Upper Colorado River East Zone Fire Management, cancelled her appearance because a new fire started in her region Tuesday afternoon. Garfield County, the BLM, and the USFS reinstated stage 1 fire restrictions last week.

One audience member asked if the Basalt region was now at a lower risk after the Lake Christine Fire. “Sure,” said Jim Genung, Upper Colorado River Zone Fuels Specialist. “If your house is now completely surrounded by burnt acreage, those fuels are mitigated and so is the risk. But no, nearly all of the region still butts up to unmitigated fuel sources, and so the risk of wildfire impinging on your home is definitely still there.”

Performing controlled, prescribed burns are the best tool experts have against fire mitigation continued Genung, but there is too much acreage to control everything. Scott Thompson, Basalt and Snowmass fire chief, offered his thoughts: “You’ll hear us push for stricter building codes, and you should too: no more cedar fences, no cedar roofs, built in fire breaks.”

“Be kind to yourselves, and take care of each other,” said Ferguson, acknowledging the hardship that wildfire affected communities go through. But the overwhelming message of the forum: don’t let your guard down, and get used to it.